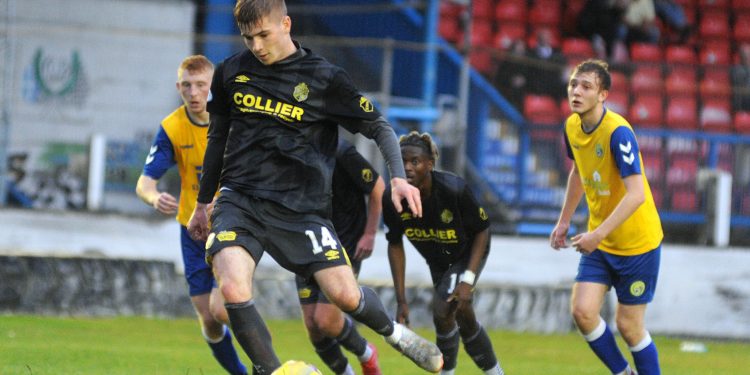 COWDENBEATH were held to a Swifts stalemate in their first pre-season friendly ahead of the new campaign.

It was a goalless affair on Friday night last week, with Cammy Graham squandering a late chance to win it from the spot for the hosts.

Around 200 fans attended the fixture against Inverkeithing Hillfield Swifts to cast their eyes on Maurice Ross’s new recruits for the first time; as well as 12 trialists eager to impress.

Prior to kick-off, it was revealed that nine signings – as of Friday – would be starting: defenders Jordan Armstrong, Daniel Martins, Mackenzie Lemon and Alfie Robinson; midfielders David Struthers, Lucas Berry and Ben Weekes; with Sam Newman and Cammy Graham on the bench.

Two trialist ‘keepers were in action, and in the first period the last line looked solid and made a couple of very good stops.

After the break his young replacement also did well, as things got busier for the Cowdenbeath defence, with 11 substitutions disrupting the flow of the home team.

There was a very sound performance from centre-back Daniel Martins, who fans have already likened to the Cowden skipper who was involved in three successful promotion winning campaigns, Joe Mbu, in dominating in the air and marshalling his defensive colleagues expertly.

Swifts comfortably remained in the East of Scotland Premier League last term and have in charge former Cowdenbeath legend, Pat Scullion, while former Blue Brazilian striker, Greg Spence, was on the bench, and the visitors opened the game brightly.

Indeed, in the first five minutes the visitors had two good chances which were squandered, then at the other end, a Martins header from corner, created a chance for the hosts’ trialist centre-forward, but the Inverkeithing ‘keeper smothered the ball in the six yard box.

Swifts were always ready to move forward quickly and in 37 minutes, as the home defence slipped up, Inverkeithing threatened from close in, then just before the interval whistle, Cowden’s trialist number nine’s shot just failed to slot home after good work by Weekes.

Cowden resumed with six changes in their side, and they were a little disjointed for a spell and Swifts’ number ten fired over from close in, but in 56 minutes Berry latched on to a fine pass from trialist number ten and his shot was only inches over the bar.

Spence came on for Inverkeithing along with three other subs, while the home side introduced Sam Newman and Cammy Graham along with their four remaining trialists, and the former Cowden front man brought out a fine fingertip save from the Central Park side’s substitute goalkeeper.

Then Spence took advantage of slack work by the hosts and his shot clipped the bar, but with four minutes left Graham was hauled down just inside the Swifts’ box.

The midfielder took the spot-kick himself, but saw the visiting ‘keeper make a good save, diving to his right to ensure a goalless evening.