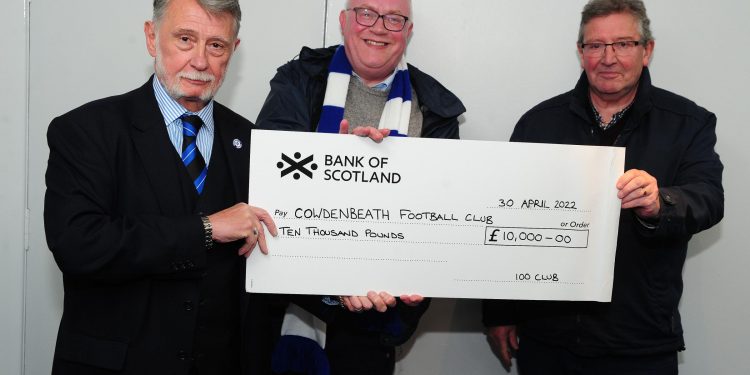 THE fundraising power of Cowdenbeath FC’s fan base was underlined by a donation made to the club by one of the supporter-run organisations.

The 100 Club is a monthly draw, organised by supporters, and attracts backing from many people who may not regularly attend games, but have a strong interest in the Blue Brazil.

The 100 Club, represented by Brian Lumsden and Craig Bennet, made a presentation to chairman Donald Findlay, after the club’s last league game of the season against Albion Rovers, which saw several thousand pounds go into the Cowdenbeath FC coffers.

The 100 Club, as match sponsors, firstly presented the Man of the Match award to Cowden ‘keeper Cammy Gill and that was followed by the handover of the cheque to the club.

The 100 Club was delighted to be able to hand over a cheque this year for £10,000, to assist the Blue Brazil’s funds.

Mr Findlay said: “Cowdenbeath FC is both delighted and humbled to receive these funds, the 100 Club is an absolutely vital lifeline for Cowden and we offer a huge thanks to the supporters in the 100 Club.”

Eating These Foods Regularly May Help Prevent Dementia, New Study Finds — Eat This Not That – Eat This, Not That