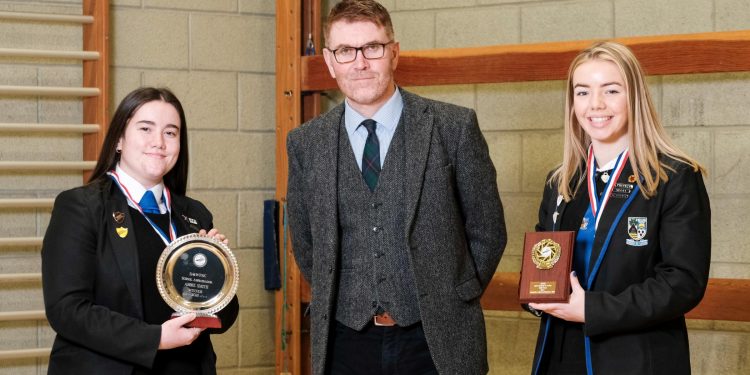 TWO Beath High School pupils have been recognised for their sporting endeavours in 2021 as part of an annual prizegiving.

Abbie Smith and Eilidh Poole were nominated for accolades at the Dunfermline and West Fife Sports Council Sports Awards, with both receiving prizes.

Eilidh was put forward for the Sports Personality of the Year – sponsored by our sister title, the Dunfermline Press – and was presented with a recognition of sporting excellence in 2021 for her achievements in karate, whilst Abbie was named as the Active Schools Fife School Ambassador of the Year.

First held in 1978, the sporting ‘Oscars’ recognised talented sportsmen and women, and clubs, for their achievements throughout the previous 12 months, as well as those of coaches and volunteers.

Eilidh was one of three nominees for the Sports Personality of the Year prize, which was won by Paralympic T20 1500 metres champion, Owen Miller, and received a commemorative plaque from the sports council committee.

She explained: “My interests in sport were sparked at a very young age. At seven-years-old, I earned my First Dan black belt, then my Second Dan at age nine. I have represented myself, my club and country at competitions all over the world and have achieved multiple Scottish, British and World titles. Visiting countries such as Japan, Croatia and Mexico are experiences I would have only otherwise dreamed of.

“In 2019, I achieved a childhood dream of being selected as a member of the Scottish National Team to compete in the World Championships in Santiago, Chile as well as the European Championships in Budapest, Hungary in 2020. Karate has pushed me beyond limits I never appreciated I was capable of and as a result I have learned to understand and demonstrate true resilience and commitment.

“Over lockdown, participating in online zoom sessions helped me to maintain a daily routine. Over the course of a six-month period, I attended morning fitness classes and karate classes in the evening. Training twice a day every day, had a knock-on effect on the rest of my day. It helped me to continue with my online schooling, and I have managed to achieve straight As in my Higher exams, resulting in unconditional university offers.

“My involvement in the sport I have dedicated my childhood to has provided me with discipline, self-confidence, an appreciation of teamwork and has confirmed to me the importance of realising my own potential. Training throughout a pandemic allowed me to gain a new love for my sport.”

Abbie was recognised for her efforts in helping to promote sport within the school, particularly in netball, and she said: “It is both an honour and shock to be recognised, as I never realised people noticed what I do.

“I am extremely grateful for my Active Schools Coordinator for helping me to achieve what I have, and I am extremely privileged for the role I get to play in my school.

“As an ambassador, my main goal is to make sure everyone has a positive experience within sport. To achieve my goal, I help at two inclusive clubs, one for adults and one for younger pupils. These clubs help to give people with disabilities an opportunity to take part in sport. During lunchtime I run a club for people with learning difficulties.

“I am also proud to be a part of the coaching committee for netball here at Beath.”

Zelda: Ocarina of Time is finally in the Video Game Hall of Fame

Zelda: Ocarina of Time is finally in the Video Game Hall of Fame