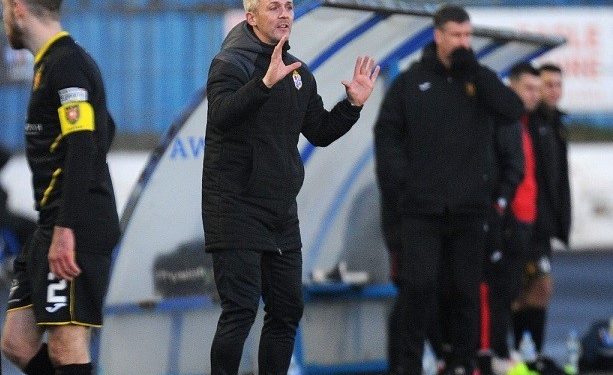 MAURICE Ross wants his team to keep their good form going when Edinburgh City come to Central Park this Saturday.

With the cinch League Two relegation play-offs less than four weeks away, the Blue Brazil boss wants his team to pick up as many wins as possible, as this can boost confidence levels as the Blues prepare for the two-leg tie which will decide if the club stays in the SPFL.

Having seen his team pose second-place Annan Athletic many problems in their 3-2 success at Galabank, Ross is asking for more from his players.

“I said after the Stirling game two weeks ago that the first period in that match was not good enough, but the team was so much better in the second period and then they continued that form at Annan,” he said.

“We took our chances well, with some excellent finishing from Andrew Barrowman and Sam Ompreon, and a fine header from Craig Barr. We put together a lot of good moves and created several chances and this is just what we will need to do when we reach the two play-off ties.

“But we now have to keep this going when we play Edinburgh City this Saturday.”

He added: “Like Annan, City have had a good season but we will be looking to beat them also and stretch our unbeaten run.

“The players have shown in recent games that they can match opponents or outplay them, but we have to look to keep reeling off good performances for that can give us the momentum to win the play-offs.

“The players are a determined bunch and have been showing that they can compete with anyone on their day and are committed to giving their all to ensure that the club stays in League Two.”

Injured defender Craig Thomson will be ready to play at Elgin the following weekend, as may striker Chris Aikamhenzie, who has missed the last two games, and goalkeeper Craig McDowall is recovering from his ankle knock and should also be ready to travel to Elgin.