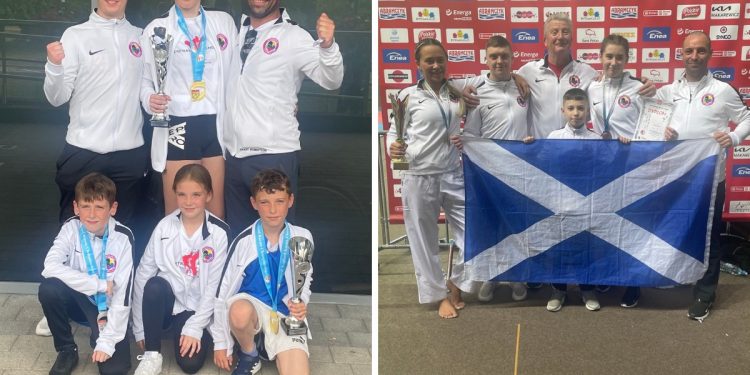 COWDENBEATH Karate Club have been fighting across the country and overseas – collecting medals and championship wins along the way.

The 2021/22 season has come to an end, with the club able to reflect on another busy and successful year.

As well as competing in Scotland, they have also put forward fighters for events in Croatia, Netherlands, Poland and Slovakia.

The session started off in Poland for an Open Championship with 1,150 entries.

The club then travelled across to Slovakia for their Grand Prix event with 2,100 entries.

Finally, the club travelled to Amsterdam for the 2022 Pepper Cup where young Luke Shiels and Webster won silver in the boys fighting event; Bauld had a successful time winning gold in the fighting (age 12-13).

Maxwell, meanwhile, won gold in both the adult 61kg and Open weight events and was voted best fighter of the tournament.

The club then fought across the UK with its less experienced fighters getting the opportunity to gain vital fighting time.

First was the Cumbrian Open and then the Manchester Open, with Webster and Shields winning gold medals each. Mia Aitken won silver, and Baul again won gold.

Glen Hayward then won the top student at the club’s grading, with Emma Duncan receiving her 2nd Dan and Bauld her 1st Dan grades under the eye of BKF and Olympic national coach Paul Newby.

The club then fought back in Scotland in Glasgow at the SKGB Grand Prix event.

Bauld again won gold in her fighting section and Mia Aitken silver in her section.

Tiff O’Reilly then won silver in his fighting event and another silver was secured via newcomer to the club, young Norah Assomoua, age 10.

The club also introduced another large group of fighters to their first competition and although no medals on this occasion, it was great experience gained for going forward in the future.

The club was then in Leicester for the British Championships and Bauld and Webster both won again with solid determined performances in every round.

Cowdenbeath Karate Club then travelled to Penrith for their annual championships with club instructor Ben Smith winning the adult black belt title with a fantastic performance.

Bauld moved up an age category but again displayed the class to again win another gold medal along with Webster. Shields won bronze with strong performances but no medals for Dean Mutter and young Anna Smith.

The last event was was the long trip down south to Worcester for the English Open and with nearly 1,000 entries.

It was another stiff test for the club, but Bauld and Wester again won gold with Shields gaining another silver. Anna Smith narrowly lost out on a fight for bronze.

Following the calendar of medal-collecting, club instructor Allan Goodwin commented: “Great efforts by everyone who has travelled to fight in these tournaments some of which are the biggest events on the circuit.

“As well as the obvious winners we continue to develop a very young team of fighters and look forward to their progress in the months and years to come.

“Mention also to the parents who afford great time, effort and cost to fully support their children and give them the best opportunities available and also to the team of dedicated instructors with the club who run this not for profit club every week.

“Also we are hoping the national squad selectors are looking at the results of young Elize Bauld when selecting candidates for future European and World games karate squads.”

The club runs all weeknights at their own purpose-built gym on Broad Street, Cowdenbeath, the Cowdenbeath Marital Arts Centre at the ‘Old Fountain Building’.

Although closed for the summer, it will open again for the first week in August where there will be a limited intake of new students .