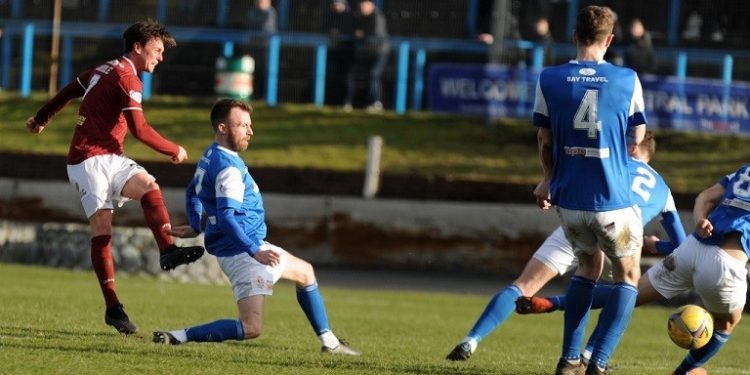 A TOP class display by Kelty keeper Darren Jamieson earned his side the points in Saturday’s derby at Central Park.

After a good first-half performance by the league leaders, they fell out of it after the break and needed a string of fine saves – and some good fortune – to complete their fourth win over the Blue Brazil this season.

Joe Cardle’s goal keeps Kelty 11 points clear at the top of League Two, they’ve also got two games in hand on nearest challengers Annan, but that was just one of the talking points at full-time.

One of Jamieson’s stops in the second period almost defied belief although he didn’t know much about it.

Fraser Mullen’s free-kick thumped the underside of the Kelty bar, the ball came down and hit the goalie on the shoulder, but instead of bouncing over the line it looped high in the air and somehow found its way onto the top of the net for a corner!

In this top vs bottom of the table clash it was Cowdenbeath who were desperate for the points and new acquisition Sam Ompreon looked a good prospect.

He showed good close control and wasn’t afraid to put in tough challenges in what was a decent display from the home side.

Blues boss Maurice Ross will look back on the game and wonder how they did not take something from it, albeit they were a little slack at Kelty’s goal.

Defensively the Blues played solidly throughout with skipper Craig Barr also posing dangers for the visitors with his headers from set pieces and his long throws.

In midfield Kyle Miller and Gavin Morrison were very competitive and in the second half they took control of the game, while in attack Ompreon was the pick.

For Hearts it was not one of their better performances and Jamieson was their stand-out contributor by some margin.

Prolific hitman Nathan Austin was firing blanks, he faded after a good opening to the match, but there were solid displays by Tam O’Ware and Daniel Finlayson in defence while Jamie Barjonas worked hard in the middle of the park.

And veteran Cardle grabbed his 16th goal of the season with a smart finish.

Hearts threatened early with a free kick in the second minute but Barjonas’ low drive was blocked by Jamie Todd, then in four minutes a long Barr throw posed issues for Kelty.

A poor clearance was met first time by Mullen but his shot from 25 yards went over the bar.

There was a warning shot for Cowden when a long ball down the park was gathered by Austin and his curling left foot shot just missed the target.

Barr was peppering the hearts box with long throws and Ompreon almost benefited when the ball fell his way but his fierce drive was blocked by Finlayson.

The Blues survived a scare when Todd missed a simple through ball to give Cardle a sight of goal but his effort hit Barr and skidded past the far post.

Robbie Buchanan showed skill and tenacity to beat Ross Philp just on the bye-line and delivered a low cross but Finlayson nicked it off Dave Carty’s toe.

The winner arrived in the 37th minute after hesitancy in the home defence was punished.

They failed to close CARDLE down and the winger steadied himself before firing a low left foot shot into the net.

After the break Cowden took to the skies with Mullen’s corner met by Barr but the skipper’s header was well held by Jamieson on his line.

Ross’ men had the ball in the net in 54 minutes when half-time sub Bobby Barr saw his shot blocked by Hearts’ goalie and Ompreon knocked home the rebound, but he was adjudged to be in an off-side position.

On the hour Mullen couldn’t believe his luck when his cracking free kick was centimetres too high, crashing onto the underside of Jamieson’s bar’s with the ball then striking the keeper and rebounding over the bar, much to the visiting fans’ relief.

The Blue Brazil probably knew then it wasn’t going to be their day and the Kelty goal continued to lead a charmed life, although the next stop was all down to Jamieson’s skill and quick reactions as he finger-tipped a close range Todd effort round the post.

It was a good spell for Cowden as they piled on the pressure but they didn’t make it count and couldn’t score – a familiar tale this season.

Credit to Kelty, they weathered the storm and played their way back into the contest, managing to see it out and move three points nearer to the title.