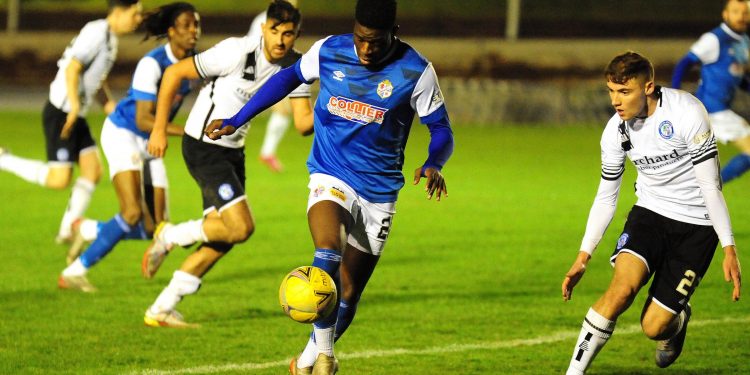 A LATE goal for Forfar last night made Cowden’s position even bleaker but the Blues had chances to win it until the Loons got the result with only six minutes remaining.

Again Cowdenbeath failed to take one of their second-half chances and their opponents were very fortunate to win it.

It was typical of Cowden’s recent luck but if don’t take the openings that come your way it will happen that way, and they were consigned to their sixth consecutive defeat following Saturday’s 3-0 loss to Stranraer.

It was a far better performance by Cowden than at Stranraer on Saturday but they still came up short, although there was a cameo performance from new signing Chris Aikamhenze which gave fans hope for the weeks ahead.

Forfar went forward from the kick-off and Craig Slater beat two home defenders and fired a curling left foot shot just wide inside two minutes, but in the Cowden reply Gavin Morrison sent over a good ball from the right and with the Loons short of cover Andrew Barrowman had the chance to shoot from 16 yards but delayed and Andy Munro cleared the danger.

In 13 minutes the visitors took the lead. The home defence was caught out by a simple through ball and Craig THOMSON latched on to it and his low angled 15 yarder went straight under home ‘keeper Cammy Gill, who could have done better.

After a quiet spell, where neither created anything clear cut, Forfar went close in 25 minutes when Slater tried his luck from 22 yards but it was held by Gill.

Ten minutes from the break the sides were level. The Loons defence got in a right fankle when a Scott Dunn long ball was not dealt with and Quinn Coulson’s cross was fired home from 10 yards by Fraser MULLEN.

The Fifers started to gain in confidence and Coulson and Mullen sent over good crosses but the finishing touch was missing for the hosts and at the break it was 1-1.

In the first minute of the second period Cowden’s Barrowman forced a punched save from Loons ‘keeper Mark McCallum with a fierce 10 yard shot, but within four minutes at the other end, Yousuf Hussain’s header from a corner was booted off the line by Mullen.

As the game started to open up in 57 minute Cowden’s Morrison saw his angled shot blocked by the outstretched arm of ‘keeper McCallum and Ross Meechan came to the rescue for Forfar with a brave clearance off the line as Liam Buchanan came in to finish, then on the hour Morrison fired wide from only six yards out following a corner.

With six minutes to go Forfar got the second goal they needed. A cross was cleared as far as MUNRO and his shot appeared to be blocked by Dunn, but the referee’s assistant adjudged the ball had crossed the line.

Elden Ring mod pits bosses against each other • Eurogamer.net

Elden Ring mod pits bosses against each other • Eurogamer.net