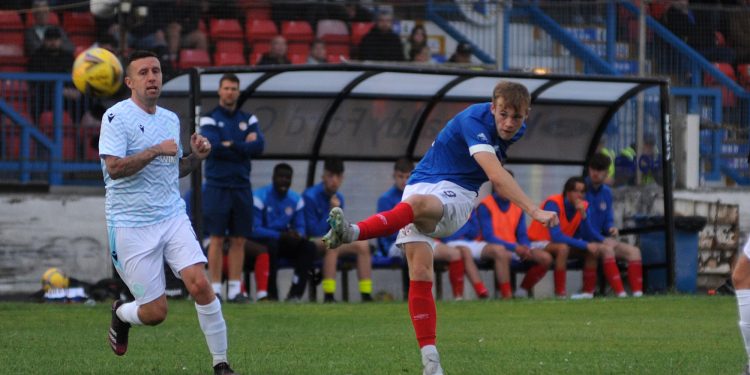 The Cumbernauld-based side, formerly BSC Glasgow, had a number of experienced men in their ranks, including former Rangers defender, Kirk Broadfoot, and they were just too streetwise for the Blue Brazil.

Midfielder, Cammy Graham, who was on crutches after the Celtic B game on Saturday, had recovered from an ankle knock to take his place in the Cowden team and posed plenty of problems for Broomhill, but too often passes went astray at the wrong time.

Defensively, Cowden made some basic errors and the result was another defeat in front of a very healthy crowd of over 400. In the second minute the visitors threatened when Broque Watson got the break of the ball on the edge of the Cowden box and it took a fine Alfie Robinson tackle to keep the front man out.

Three minutes later Graham worked his way into the Broomhill penalty area and a brave Aiden McLaughlin tackle deflected the ball out for the game’s first corner, then soon after Aiden Gilmartin worked a good position for himself 14 yards out and Broomhill ‘keeper David Wilson did well to hold his shot.

On the 15 minute mark the visitors took the lead. The Cowdenbeath defence failed to deal with a corner and from 12 yards unmarked veteran defender BROADFOOT send a powerful header wide of Mason McCready.

Cowdenbeath thought they had equalised eight minutes from the break when Graham’s corner appeared to be dropped into the net by Wilson, under pressure from Chris Aikamhenze, but the referee thought the ’keeper had been fouled, then on the interval whistle a fierce Gilmartin eight yard shot was blocked by James Grant.

The home side went two up seven minutes into the second period when a low Jamie Semple shot was blocked by McCready and Ryan CONROY fired home close in.

Then four minutes later it was 3-0. The home side failed to pick-up midfielder Matthew McDONALD and his angled 10 yarder flew into the top corner.

Cowden tried to get back into the game and a Trialist forward saw Wilson save well from a low shot but there was no way back for the Blues.