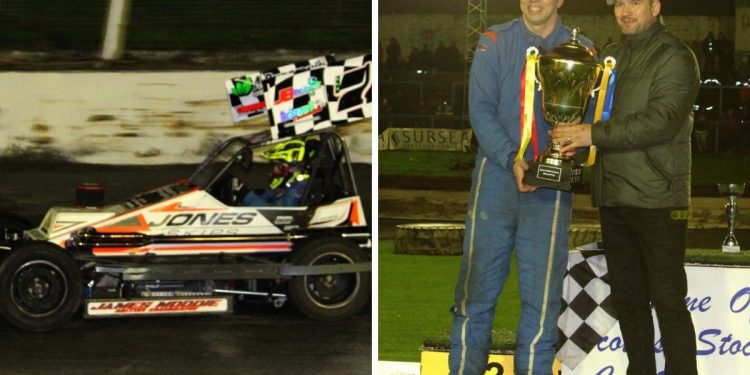 THE pinnacle of every driver’s dream is to be the World Champion of his chosen sport and as in stock cars race with a gold roof.

One such is Gordon Moodie, from Windygates, who was hoping in 2021 to make it a hat-trick of Formula II World titles only to be struck down by illness which threw his preparations out of the window.

In the end he did make the World Final but had to start at the rear of a thirty five car field!

The Windygates flyer is this week’s Racewall driver to be interviewed by our reporter Jim Turner.

Gordon is no stranger to winning titles and in his career to date has won the World Championship three times, the National Points title twelve times, and when it was changed to the National Series, twice.

He has also won the European Championship four times, the British title three times, the ‘Scottish’ nine times, the ‘English’ four times. the ‘Irish’ once, plus the World Cup in Venray, Netherlands, six times – plenty of trophies with his name on it!

Said Gordon: “I started the season with the car that I won my second World title with at Buxton.

“It was an RCE but basically the only thing that was original were the main rails. The start to my World title defence didn’t go as well as I hoped and whilst I scored points in my heats at both Crimond and the Racewall, I retired early when the finals started – the one at the Racewall also being the Scottish Championship.

“My best qualifying round was at Buxton, where I started off with a fifth place in my heat, and then made steady progress through the field to win the final.

“How different the weather was the following day for the British Championship. At one point it was raining so heavily that the track flooded. We all raced three times and I won two of my heats and was third in the other, which put me on pole for the final.

“I made a good start to take the lead and despite a couple of race suspensions went on to win.”

Added the fast Fife driver: “I raced in two of the shale qualifying rounds, at Mildenhall and Northampton, but didn’t score too heavily but I still ended up with a reasonably good semi-final grid position which was to be run at Northampton.

“I raced at the UK Championship at Skegness and did reasonably well in my heats. The following day in the final I made two good starts, but on the second I tangled with Luke Wrench and whilst I managed to keep going, I later tangled with Billy Webster and ended up in the fence!

“Then I was stuck down with an infection which put all my plans on hold. I missed a few qualifying rounds and just wasn’t fit enough to race in the semi-final.

“My preparation for the ‘World’ was way behind and whilst I raced my new car at the Racewall, there was a lot needing to be done even although I won the Grand National

“At practice for the ‘World’, at Skegness, I found the car average; it was missing that bit extra. The race itself was alright. I started last on the grid and ended up sixth which was about all I could ask for.”

But he felt he had to make changes to the car: “When we got back home a lot of minor changes made the car a very different animal and I felt a lot more competitive.

“In fact, I raced in five meetings between then and the end of the season and won the finals in all five! I was now racing at the level I wanted to be at!

“Towards the end of the season, along with Chris Burgoyne, we were followed around by television crews who were filming for a Stock Car Superstars programme. We were filmed at home, at the garage and travelling to the racing and at the racing.

“With the cameras filming I had to retire from the Champion of Champions race but won the James Clark Cochrane Memorial Trophy final. That turned out to be tough race on a very wet and greasy track surface.

“My last appearance of the season was at the Gala Night meeting at Skegness. I picked up second place in my heat but whilst the car was good,

“I still made a few changes for the final. They worked and the car ran much better, and I was able to work my way through the field and ended up as the Gala Night Champion.

“One of my targets is to win more finals. I am sitting at 475 final wins and I hope to reach the target soon.”

Dead Island 2 Is Confirmed To Be “In Active Development”

Dead Island 2 Is Confirmed To Be "In Active Development"