Cowdenbeath Racewall: This is how I won a world title 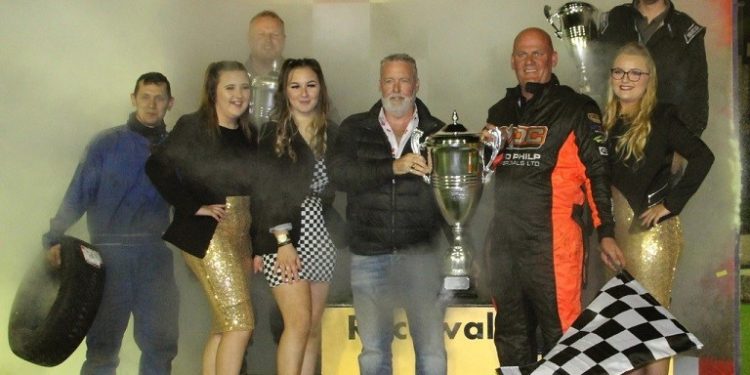 THE name Philp is synonymous with stock car racing in Scotland, starting off with Davy Philp, who raced Hot Rods, with his children Gillian, Hazel and David Jnr all following him into the sport whilst David Jnr’s son, David Jnr Jnr starts his Ministox career in 2022!

And this week’s interview subject for our Racewall reporter, Jim Turner, is a member of the Philp family who is very much keeping up the family tradition and managed a World title win in 2021.

I asked David Jnr, who lives in Bathgate, why he decided to return to the racing in 2021. With a smile he commented: “I am a director of DP Commercials, which is located in East Calder, and it was in a place that I wanted it to be and with the ORCi Stock Rod World Final being run at the Cowdenbeath Racewall, everything was in place for me to return.

“On top of that David Jnr Jnr was having a year out before he starts his Ministox career. When I look back on the season I am glad that I did! I was using the car that Andy Grant had raced, had done a few cosmetic and mechanical changes and had it ready early for one of the practice meetings. The car ran well and I used the session to get to grips with how the car behaved and to the track. It had been a while since I had last raced at the Racewall.

“When the season started in May initially things went well and I managed to chalk up the fastest lap. Then I hit a stumbling block due mainly to some erratic driving on my part! I started to exert more effort on working on the car in the garage to make sure that it was the right set-up and mechanically correct. Races are not always won on the track but the preparation in the garage goes a long way for that to happen.

“The week of the World Final I had a lot of help from my mechanics and we all had good vibes about the weekend. Stewart Armit suggested that we leave the car in its orange livery – I have always raced in orange and silver so he planted a seed about the colour in my brain.

“One of my dad’s mechanics, Robin Wallace dropped in and we had a nice chat about the racing. Mind you on the Friday night we all worked very late checking and setting up the car.

“On the day of the World Final I only did a few practice laps. The car was the best it had ever been and I didn’t want to show my hand too much. We were to race in reverse grid heats with the points we scored determining where we would start on the final grid. I was third from the back in my first heat and had hoped for a top ten finish and a much better result when the grid was reversed.

“Normally, I would have been flat out right from the start but this time I held back and had time to miss the early shunts that happened ahead of me. Towards the end of the heat John McAllister overtook me, but as he did, I braked hard, dived through on the inside and through to win. I had worked out roughly where I needed to finish in my second heat to get a good grid start. As it was, I had an uneventful heat and brought my car home in fourth place. That put me on the front row outside with John on pole.”

He remembers the race well: “John and I were side by side going down the main straight, but being on the outside the turnstile bend wasn’t as tight for me as it was for John, and I drove around him and into the lead. Once ahead I began to ease away from the field and soon was enjoying a decent lead.

“The traffic was horrendous and we were soon catching back markers. There were a few drivers with wayward racing lines and that caused problems. After one stoppage I had James Gray in close order and I was just beginning to open up a gap and then I saw James heading backwards into the wall as he lapped a car. That caused another stoppage. What didn’t help was the new rule that allowed back markers to go to the back of the grid so I had no buffer when we restarted.”

David was looking good though: “There were only five laps to run and John was back in second place and I really began to feel the pressure. John was looking for a way through and I had to concentrate and to make sure that I held my racing line.

“With two laps to run John made a mistake on the pit bend which allowed me to open up a small gap. The emotion was starting to kick-in and I knew that the race was mine.

“When the last lap board appeared, I was calm and hoping that nothing would happen to the car. Then exiting the pit bend the chequer flag was waiting to drop and I must admit I was emotional when I finally crossed the finish line. Standing on the top of the podium was fantastic, most of my family were there. We all got a tremendous applause from the fans on the victory lap.

“I get tremendous support from my wife Nicky and all our family and was pleased that they were there to share it with me. Prior to my win Gillian and I had chalked up six World Final runners-up spots between us.

“My other chequered flag win was when the car sailed through scrutineering as I knew it would and then we set off home. I went straight to the garage to get the car ready for Sunday. We fitted the spare engine into the car and somehow someone appeared to change my roof from red to gold. I got home around 4.30am, had four hours sleep and then got ready for Sunday’s meeting. I didn’t have too good a meeting, hit the wall and had quite a bit of damage and what was to be important a lot of points.”

He went on: “Our next meeting was the Scottish Championship and the grid was decided with a draw out of the hat. I drew third spot but told everyone it was much higher. It was a good track and I managed to get through into the lead and went on for a comfortable win. I was absolutely delighted.

“As the season drew to a close, we were to end with another double header. Not only that but the track points were close with Mikey Bethune, Cammy Doak and myself all within, I think, six points of each other. On Sunday it was even closer and when I went through to win the opening heat, I was ahead.

“The second heat was a disaster though. I hit the wall and my car cut out. My starter was on the bars at the side of my door but as I tried to restart the car my fingers slipped between the bar and the door. Just then Cammy brushed against my car trapping my fingers. I stopped and the medics patched me up and foolishly I went out for the Scottish Open. Mikey won from Cammy and I was third but the points went to Mikey.”

Looking ahead David Jr concluded: “I am building a new Corsa C for next season and hope to have the Adam I started on finished as well. I intend to take in all the championships if I can. Young David also starts his Ministox career and that will be taken into account!

“When I look back, I started racing a Ministox at Cowdenbeath in 1990 for half a season before moving into a Stock Rod. It was rear wheel drive and I hated it! I helped Gillian for a lot of years before returning in 2000. I was lucky enough to win a lot of titles and amongst them was the Scottish Championship, the Scottish and track points and the National Championship at Hednesford in 2009. I also raced my Stock Rod at Mallory Park and won. I had a brief spell in one of Ricky Hunn’s National Hot Rods and loved it. I qualified for the World Final at Ipswich, but didn’t have much success.

“I retired from racing to concentrate on helping the family business to expand into what it is now, in a strong place. Over the past few years, I travelled extensively with my son who was racing his Micro F2, and when he had to retire bought him a Ministox. I really enjoy watching him race.

“I have a small band of mechanics to help, including my brother-in-law Allan, and Andy Grant although there are a few others who do help. I am lucky enough to get sponsorship from DP Commercials, Scrapco, Saltire Tyres, Hillend Motors, Hermiston Motors, Armit Fabrications and JB Engines, which is greatly appreciated.