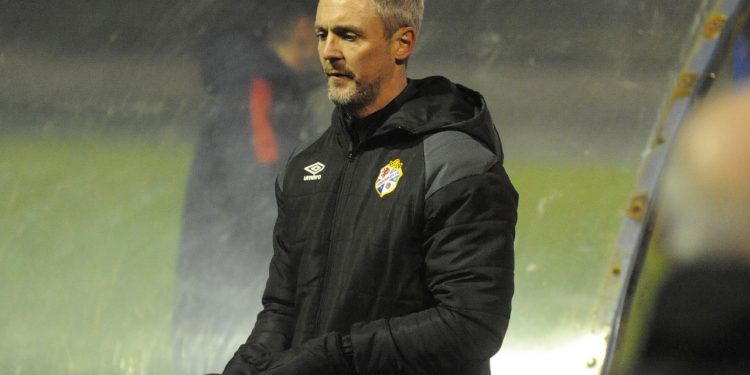 COWDENBEATH manager Maurice Ross has added to his squad once more ahead of his side’s trip to Stirling Albion this weekend.

Arriving tonight (Friday) on loan is 20-year-old centre-back Scott Dunn from Queen of the South.

He made a number of appearances for the Dumfries club earlier in the season and then had short stint on loan at Broomhill gaining further experience by playing in the Lowland League.

A statement on the Cowdenbeath website stated: “We are delighted to welcome Scott to Central Park and our thanks of course go to Queen of the South for working with us on this deal for the benefit of all parties.”

Dunn joins fellow new recruit Alex Ferguson in making his way to Central Park in the last couple of days.

Maurice Ross wants his side to make it three wins out of four away games when his team goes to Stirling Albion tomorrow (Saturday).

The battling victory at Albion Rovers has closed the gap between Cowden and the Coatbridge men to six points.

And if Cowden can earn another three point haul, at Forthbank, they could close the gap on Albion to three, with the Rovers having a tough fixture this weekend at second top Forfar Athletic.

With back-to-back away wins under their belt at Stenhousemuir and Coatbridge, confidence levels are rising in the Cowdenbeath camp.

And to help the cause manager Ross has added winger Joe Moore to the squad and ‘keeper Craig McDowall, as well as forward David Carty.

Ross was pleased with the battling approach his team took at Coatbridge and wants more of the same at Stirling.

“The strong wind did not make life easy for the teams at Albion Rovers, but the lads fought hard for every ball and grabbed an early goal, which is so important in these sort of games”, said the manager.

“We had the better of the chances as the game evolved and really we could have got a second before we were faced with playing the closing minutes with ten after Kyle Miller’s dismissal.

“We really responded well to the situation and defended very solidly to get the result which closes the gap to six points.”

The manager said that the substitution of Moore for Harvey Swann , when Miller was dismissed, was no reflection on the new recruit’s performance, but was about strengthening defensively in time added on.

He added: “If we can go to Stirling and get another win on the board it could really help us establish a platform to be able to close up on some of the other sides in the bottom half of the table, although they are a side with some very influential players.

“We can only do that by showing the same committed brand of football we played on Saturday.

“We played well as a team unit, and enjoyed a few breaks, and it will be so important to repeat that in our remaining games.”

Cowden will be without midfielder Miller, red carded at Albion Rovers, and it may mean the manager reshuffling the pack with Swann in line for a starting spot.

10 things to do in L.A. for Super Bowl week, from free to fancy