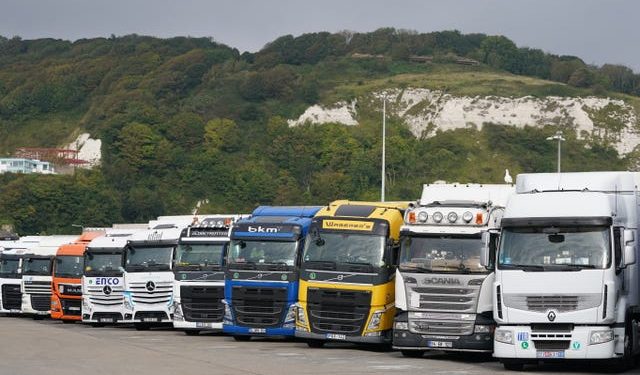 Dover has been plunged into traffic chaos, with gridlocked roads near the port caused by disruption to cross-Channel ferries and bad weather.

The suspension of P&O services, with three of the company’s vessels at berth in Dover, has been partly blamed for long queues in the area.

Adverse weather in the Channel and congestion caused by tourists travelling to Kent for an Easter getaway are also said to be contributing to the jams.

Drivers have been forced to wait for hours to board ferries after measures were triggered to control the movement of HGVs in the area.

Under Operation Brock, lorries heading to Dover are allowed to use one side of the M20 while all other traffic is restricted to a contraflow system on the opposite side.

The Department for Transport (Dft) said efforts were being made to minimise disruption.

“We are aware of queues at Dover, and the Kent Resilience Forum and local partners are working to minimise any disruption by deploying temporary traffic management measures as standard,” it said in a statement.

“This has been caused by a number of factors, including severe weather in the Channel.”

Dover MP Natalie Elphicke blamed the delays in part on P&O Ferries, which she said is still not operating following “failed safety checks” on its new crews.

Ms Elphicke warned the disruption is expected to last for the next few days.

“The traffic disruption caused by P&O’s actions is very serious. Coupled with adverse weather conditions and the Easter get-away traffic the situation has become severe. This can be expected to continue for the next few days,” she said.

The problems have caused “unacceptable impact” locally, she said.

The Port of Dover said the main approach roads were “very busy” on Saturday morning and urged passengers to factor in extra time for their journey.

“We are working with operators to get people on their way as swiftly as possible, but are asking passengers to please allow extra time for their journey and contact their ferry operator for travel advice,” it said.

It said the lack of P&O services is continuing to impact remaining ferry operations.

Kent Police and National Highways are helping with traffic management on the M20.

SoftBank liquidates most of portfolio at ‘Nasdaq whale’ trading unit

Is Chelsea vs Brentford on TV? Channel, live stream, kick off time and team news for Premier League match

Is Chelsea vs Brentford on TV? Channel, live stream, kick off time and team news for Premier League match