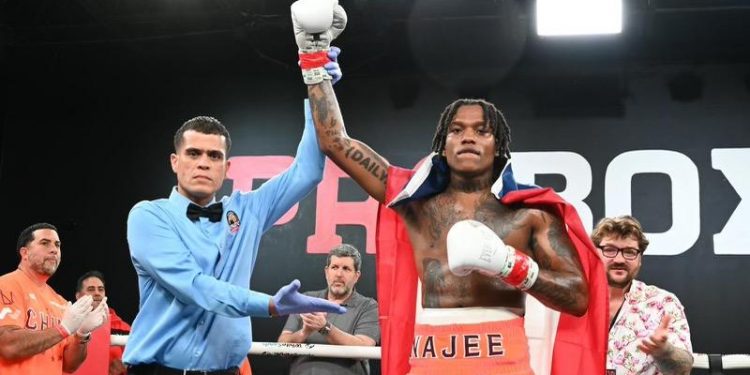 Being touted as one of the best cruiserweights prospects in boxing, Najee Lopez (pictured above; 4-0, 4 KOs) continues his career with a knockout streak of four, as he stopped Anthony Stewart (6-2-2,) in the fourth round of a scheduled six-round bout. Lopez continues to look like America’s next great cruiserweight. Lopez spoke after the fight, and remarked what a tough out Stewart was. Photo by Damon Gonzalez/ProBox

“This guy was tough, and I didn’t want to take any chances as his record was deceptive, so I wanted to use my talents as well as youth to my advantage,” said Lopez, age 22, who fought for both Team USA and Puerto Rico as an amateur. “I got the knockout as I envisioned. I have a great team, great fighters (Roy Jones Jr, Antonio Tarver, Paul Malignaggi) called my fight – I want to be better than good, I want to be talked about by everyone in the industry. I’m in this sport for legacy.”

ProBox has Jean Pascal v Fanlong Meng May 20, by the way

Super middleweight Daniel Blancas (1-0, 1 KO) had about as good of a pro debut as you can have, picking up a second round KO over Andre Graham (0-1), as two consecutive right hands saw his opponent fall face first in a highlight reel type fashion.

“I couldn’t have imagined my pro debut going any better than it did, it was perfect,” said Blancas, age 21, who hails from Milwaukee, Wisconsin. “I knew I had him hurt in the first round, and then in the second when I started to pick up my pace, I felt that he was fading. I continued to throw my right hand and left hook combo, and it paid off. I am beyond happy with this performance.”

Middleweight Darrelle Valsaint (3-0, 2 KOs) made short work of his opponent, Geronimo Nahuel Sacco (9-4-1, 1 KO), stopping him with a right uppercut in the first round. The decorated Haitian Olympian boxer is continuing his legacy in the pros. DVS had his hand raised on March 25. Photo by Damon Gonzalez/ProBox

“ProBox and my manager Tim VanNewhouse set the stage for me to perform, so I had to deliver,” said Valsaint, age 19, fighting out of Orlando, Florida. “With my deep amateur background, I am trying to establish early on in my career that I am on a different level than these opponents. I am truly looking to challenge myself soon in this sport.”

“It was a great first fight, and I love the professional quality involved with the promotion, it felt like a big event, and I am excited with where my career will go,” said Rivera, age 20, who looks to follow in the footsteps of past great Puerto Rican fighters. “I am excited to get right back in there and resume my career as I know this is a long journey. My goal is to be great like many of my countrymen of the past.”

“I am thrilled with how all of the fighters performed tonight and beyond that, it was amazing how each fighter showed different traits,” said VanNewhouse (below), when talking about his young stable of fighters. “I couldn’t have asked for more as I had four fighters on the card, and each won by knockout. What a night it was for my company!”