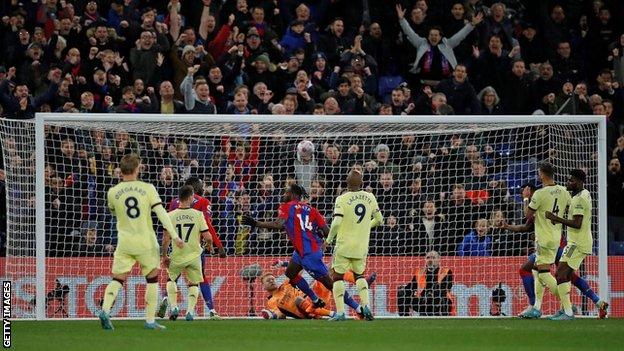 
Arsenal boss Mikel Arteta apologised for his side’s performance in their surprise defeat at Crystal Palace and accepted it was not good enough for the north London club.

The visitors had gone into the game looking to move back into the top four and strengthen their hopes of Champions League football.

But they were second-best throughout at Selhurst Park as former Arsenal midfielder Patrick Vieira, now in charge of the Eagles, got one over his former side in some style.

“It is time to accept the criticism, put your hand up and apologise because this performance was not good enough for this club, but then react,” Arteta said.

“From the beginning we were not at the races. When you come here you have to compete, you have to win duels and second balls and be aggressive and we were none of those.”

The Gunners would have moved above rivals Tottenham with victory or even a draw but fell behind early on through Jean-Philippe Mateta’s header following a free-kick.

Things got worse for the visitors a few minutes later when Jordan Ayew got away from two Arsenal defenders and bent a shot beyond Aaron Ramsdale.

Arsenal showed some improvement after the break and should have at least got one back as Martin Odegaard shot wide when unmarked inside the box, while Eddie Nketiah hit the woodwork.

Palace made sure of a hugely impressive win when Wilfried Zaha was brought down inside the box late on and the forward stepped up to convert the penalty.

The victory, Palace’s first at home in the league in 2022, moves them up to ninth while Arsenal remain fifth and outside the top four on goal difference, albeit with a game in hand.

An opportunity missed by Arsenal

A dreadful start to the season had seen the Gunners briefly flirting with the relegation places but they have been transformed as the campaign has gone on.

They went into this game knowing they had a huge opportunity to put themselves in the driving seat for Champions League football next season with a win and they had every right to feel confident of getting it on the back of six wins in their last seven games.

But they never got going against a tenacious Palace side as they lacked the same level of aggression as their hosts.

Arsenal have that game in a hand over Tottenham, so still have the opportunity to make amends for this poor performance and recent form suggests this display was an outlier.

However, Arteta knows they will need to show significant improvement in the coming games to ensure they end the season in the top four, particularly after Spurs thrashed Newcastle 5-1 on Sunday.

To make matters worse, Arsenal could be without full-back Kieran Tierney for a period of time as he missed the game with a knee injury, while midfielder Thomas Partey went off injured in the second half.

Vieira gets one over his old team in some style

Palace boss Vieira is a club legend at Arsenal following many years of dominating the middle of the park for the Gunners, and he came within seconds of a famous win at the home of his former side in October.

Back then, an injury-time equaliser by Alexandre Lacazette broke Palace fans’ hearts but there was nothing to spoil the party this time as Palace produced a stunning display.

They were more aggressive than Arsenal and showed more desire, with every single member of the Palace team playing their part in what is undoubtedly one of the standout results of Vieira’s impressive reign at Selhurst Park.

“I don’t think it is the best performance, it is the performance we want and expect. At the beginning of the season we had some highs and lows. This time we played well from the first minute and I am really proud of the players.

“Our objective now is to try and perform like that and that is the challenge for us.”