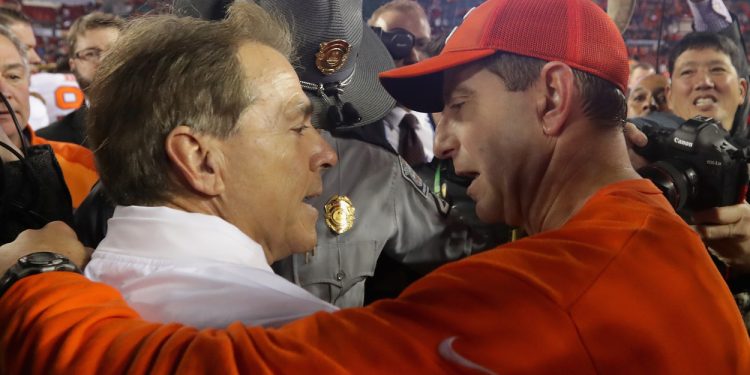 When Nick Saban took over the Alabama Crimson Tide in January 2007, he envisioned bringing a championship culture back to the legendary SEC program. Early on in the process, he set his eyes on a rising coach who could speak to what playing in Tuscaloosa was supposed to mean.

While assembling his first staff, Saban contacted Dabo Swinney, the Clemson wide receivers coach and recruiting coordinator who had played receiver at Alabama in the early 1990s. During a recent podcast appearance, the longtime Clemson head coach reflected on his conversations with Saban and why he chose not to return home 15 years ago.

After joining Alabama’s program as a walk-on in 1989, Swinney eventually earned a scholarship and won a national championship in 1992. Despite only hauling in seven catches for 81 yards, he did enough during his playing career to impress then-Crimson Tide coach Gene Stallings, who originally hired him as a graduate assistant in 1993.

Swinney stuck around in Alabama and spent 1996-2000 as a full-time position coach. However, Stallings’ successor, Mike DuBose, fired the ex-Crimson Tide receiver — then serving as Alabama’s receivers coach — following the 2000 season. After spending two years working in real estate, Swinney joined Tommy Bowden’s Clemson staff ahead of the 2003 campaign.

Flash forward to 2007, not long after Swinney finished his fourth season under Bowden. During a Jan. 27 appearance on The Players Club Podcast, Swinney reminisced on conversations he had with Saban at the time regarding a reunion in Alabama. Although the two didn’t know one another well, the veteran head coach wanted the popular recruiter to become his pass game coordinator.

Although Swinney technically would have taken a lesser job, he also would have received a $150,00 raise upon returning home. However, he opted to stay at Clemson, a decision he explained on the podcast.

“Sometimes, the decisions that we make don’t make sense. I mean, it was a $150,000 raise to go take this job. On the surface, it all made sense, but it just wasn’t the right timing for me. … It wasn’t the right thing for me, and it would’ve been bad for Clemson. It just wouldn’t have been right.”

Swinney’s move immediately paid off, and he earned a promotion to assistant head coach ahead of the 2007 season.

Expectations were high for the 2008 Tigers after Clemson went 9-4 a year earlier. However, the team stumbled to a 3-3 start and lost two of its first three ACC games. Bowden, the Tigers’ head coach since 2008, promptly resigned on Oct. 13.

Rather than promote defensive coordinator Vic Koenning or offensive line coach Brad Scott, each of whom had held previous FBS head coaching jobs, Clemson named Swinney as Bowden’s replacement. Considering Koenning and Scott had each been on Clemson’s staff for multiple years at that point, it isn’t unrealistic to believe either would have been promoted if Swinney had spent the 2008 campaign serving as Saban’s pass game coordinator.

Nearly 15 years later, it is incredible to wonder what could have been had Swinney not been in Clemson at the time. He was only 38 years old when he took over (the former Crimson Tide wideout turned 39 on Nov. 20, 2008) and earned the full-time head coaching job after going 4-2 as the interim head coach; he lost his first game as the full-time head coach hin that season’s Gator Bowl.

Although it is theoretically possible Clemson would have hired Swinney in the 2008-09 coaching cycle for the sake of familiarity, it is difficult to imagine the school making that a reality, especially given his lack of head coaching experience at the time. Instead, he might have needed to wait several more years before earning his first head coaching gig.

In the end, Swinney didn’t need Saban’s help to earn a head coaching opportunity. Trust us when we say plenty of others have happily put the legendary coach’s name on their resume as a reference.

As of February 2022, 10 of Saban’s former assistants are currently Power 5 head coaches. Four of those coaches – Florida’s Billy Napier, Georgia’s Kirby Smart, Ole Miss’ Lane Kiffin, and Texas A&M’s Jimbo Fisher — will all spend next season battling it out with the seven-time national champion for SEC supremacy.

The success doesn’t stop there. Seventeen of Saban’s former assistants had head coaching jobs at either the NCAA or NFL level as of publication. The list ranges from Las Vegas Raiders head coach Josh McDaniels, who worked as a graduate assistant for Saban at Michigan State in 1999, to new Oregon head coach Dan Lanning, an Alabama GA in 2015.

Saban has been a head coach for so long that two of his former players, Herb Maygood and Matt Eberflus, are now head coaches in their own right. Haygood, a former Michigan State receiver, is 1-13 in two seasons at Madonna University, an NAIA school in Michigan. The Chicago Bears hired Eberflus, who started at linebacker for Saban at Toledo in 1990, as their head coach in January 2022.

In another universe, perhaps Swinney would appear next to the likes of Kiffin and Lanning on Saban’s coaching tree. However, as frustrated as they may have been at times in the 2021 season, something tells us that Clemson fans should be extremely grateful with the universe they’re currently living in.