Daily coronavirus vaccinations in the United States have finally surpassed levels seen on Inauguration Day after lagging for several days.

On Thursday, about 1.7 million COVID-19 shots were distributed across the country – 100,000 more than the day President Joe Biden was sworn in – according to data from Bloomberg and the Centers for Disease Control and Prevention (CDC), as were 1.6 million shots on Friday and Saturday each.

This means that since the first jabs were administered in December 2020, 31.8 million Americans have received at least one dose – 9.6 percent of the population – and 5.6 million are fully inoculated.

Currently, an average of about 1.3 millions per day are being immunized.

California has supplied the most doses with 3.4 million, enough for about eight percent of its population, but North Dakota has used the most of its supply, with 90.6 percent administered, CDC and Bloomberg data reveal.

However, with a snowstorm pummeling the East Coast, with as much as two feet expected in some areas, cities in at least five states have shut down vaccination sites on Monday.

‘You know, what do they say – when it rains, it pours? You know right now we’re hearing we could have as much as 22 inches of snow. I declared a state of emergency last night. I said to folks, stay off the roads. It’s dangerous,’ Mayor Bill de Blasio said on MSNBC’s Morning Joe on Monday.

‘You know, job one right now is to protect people’s lives by dealing with the snow first. We really want to get back to vaccination tomorrow, God willing.’

With at least 150,000 shots not expected to be given over the next 24 hours, the Nor’easter could derail Biden’s goal of getting 100 million shots in arms in his first 100 days.

What’s more, in a press conference on Monday, Andy Slavitt, acting administrator of the Centers for Medicare and Medicaid Services, acknowledged some vaccine doses are ‘tied up’ in the federal partnership with CVS and Walgreens to distribute shots to nursing home because officials ‘overestimated’ the number of people in nursing homes. 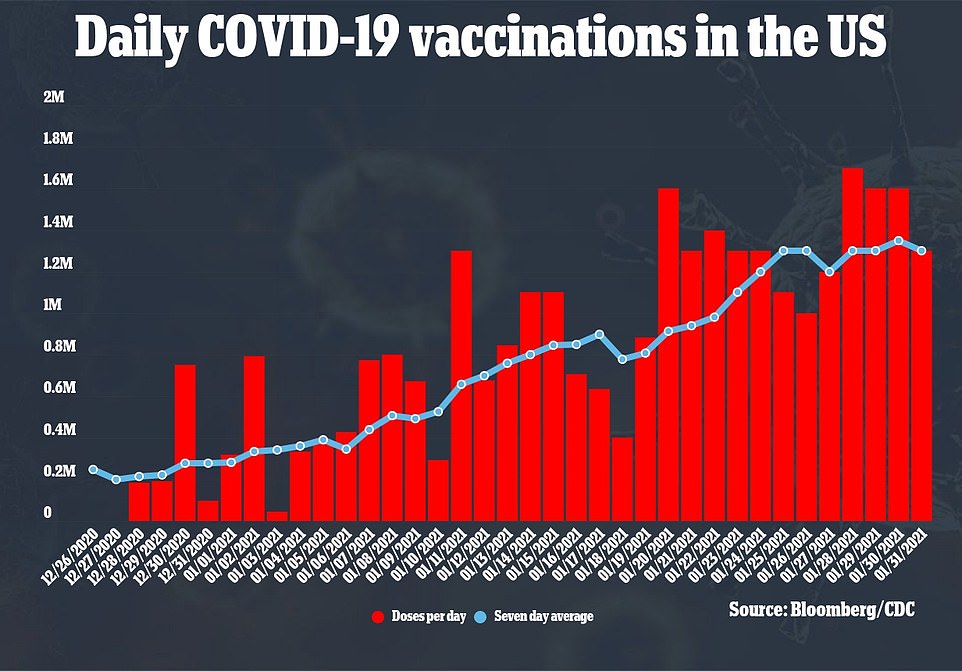 Daily coronavirus vaccinations surpassed the number given on Inauguration Day with 1.7 million received on Thursday and 1.6 million each given on Friday and Saturday 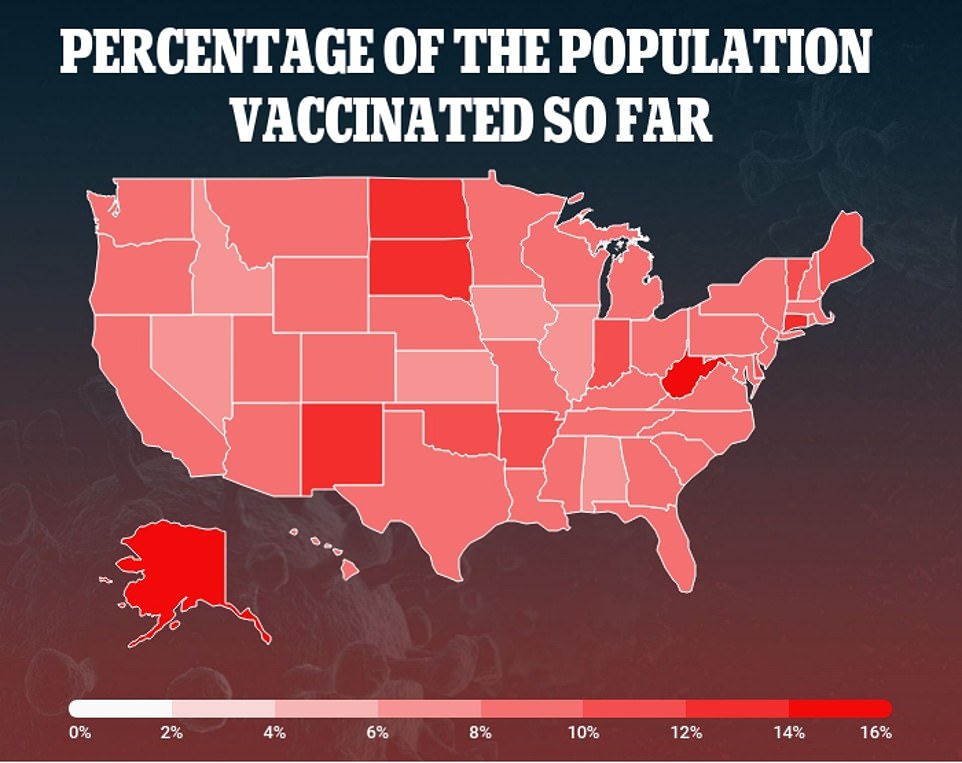 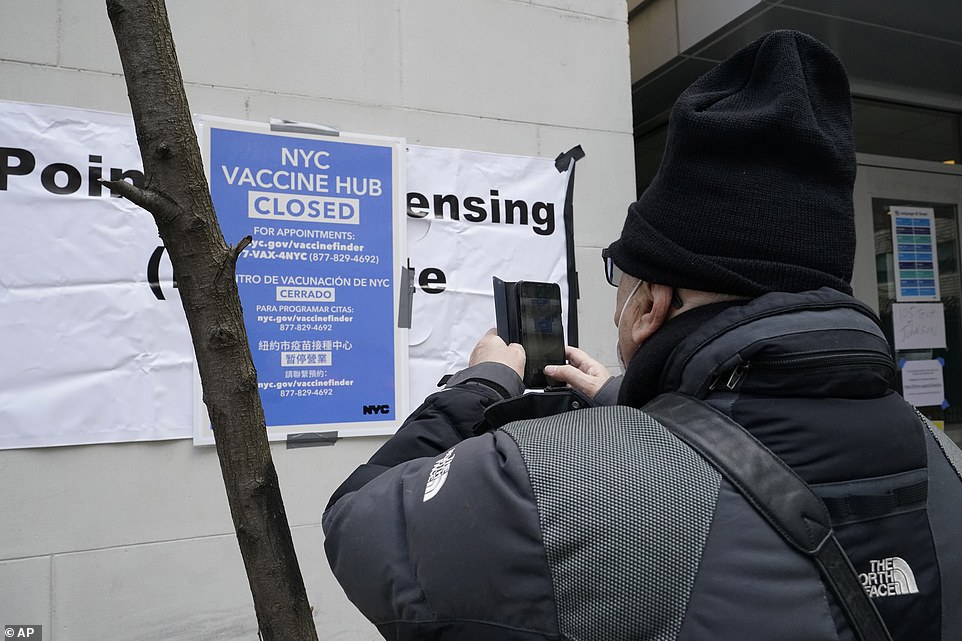 At least seven states – including New York (pictured), New Jersey, Pennsylvania, Rhode Island, Connecticut, Maryland and Virginia – closed on Monday due to a snowstorm expected to bring up to two feet in some areas

A Nor’easter expected to bring several feet of snow and powerful winds have caused coronavirus vaccination sites in multiple states to be shut down.

In New York City, Mayor de Blasio said sites would be closed on Monday and Tuesday due to the blizzard-like conditions and appointments would be rescheduled.

At a news conference on Sunday, Blasio said he did not want older New Yorkers to be on the road heading to their appointments in white-out conditions.

The mayor declared a local state of emergency and barred all ‘non-essential travel’ from 6am on Monday due to 6am on Tuesday.

At least five state-run vaccination sites have canceled appointments for the day and will send emails and text messages with new appointments for later this week, according to Melissa DeRosa, the top aide to Governor Andrew Cuomo.

North Dakota is the state distributing the highest percentage of vaccines, using 90.8% of its supply from the federal government

‘We ask all New Yorkers to monitor the weather and stay off the roads tomorrow so our crews and first responders can safely do their jobs,’ she said in a statement.

There are some fears that canceled appointments in New York City will further drive down the rates of black adn Hispanic residents being vaccinated.

Data released by the city’s health department shows that nearly half of all  New York City residents who have gotten at least one vaccine dose are white.

Meanwhile, just 11 percent and 15 percent of doses have been given to African-Americans and Hispanics, respectively, despite the fact that both groups combined account for more than half of the city’s population.

City leaders say this is especially concerning considering that the virus has killed black and Latino people at disproportionately high rates in New York City and across the nation.

However, New York is not the only state that has shut down vaccination sites.

In New Jersey, Governor Phil Murphy declared a state of emergency on Sunday, meaning all six vaccine ‘mega-sites’ across the state will be closed on Monday, due to the storm.

Additionally, several county-run vaccine clinics have closed for the day with appointments expected to be reschedule.

‘Due to the storm, we expect most, if not all, vaccine sites to be closed on Monday,’ the state Department of Health wrote in an email to residents with vaccine appointments.

‘Depending on the extent of the storm, operations of vaccine sites on Tuesday may also be disrupted.’

Murphy said those with canceled appointments will receive phone calls to reschedule their vaccinations within the week.

In Philadelphia, the Health Department announced it will be operating its COVID-19 vaccine clinic at just one location for appointments previously scheduled.

Anyone with appointments at non-city sites, such as hospitals, clinics, and pharmacies, are being asked to ahead to check their status. 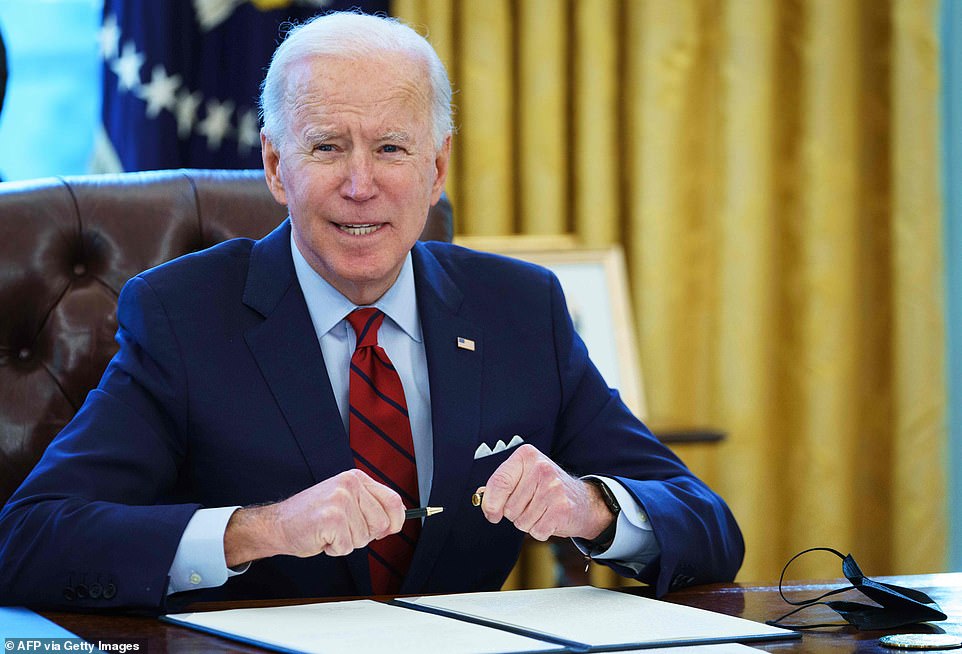 The snowstorm could derail President Joe Biden’s goal of 100 million shots in 100 days. Pictured: Biden prepares to sign executive orders on affordable healthcare in the Oval Office of the White House, January 28 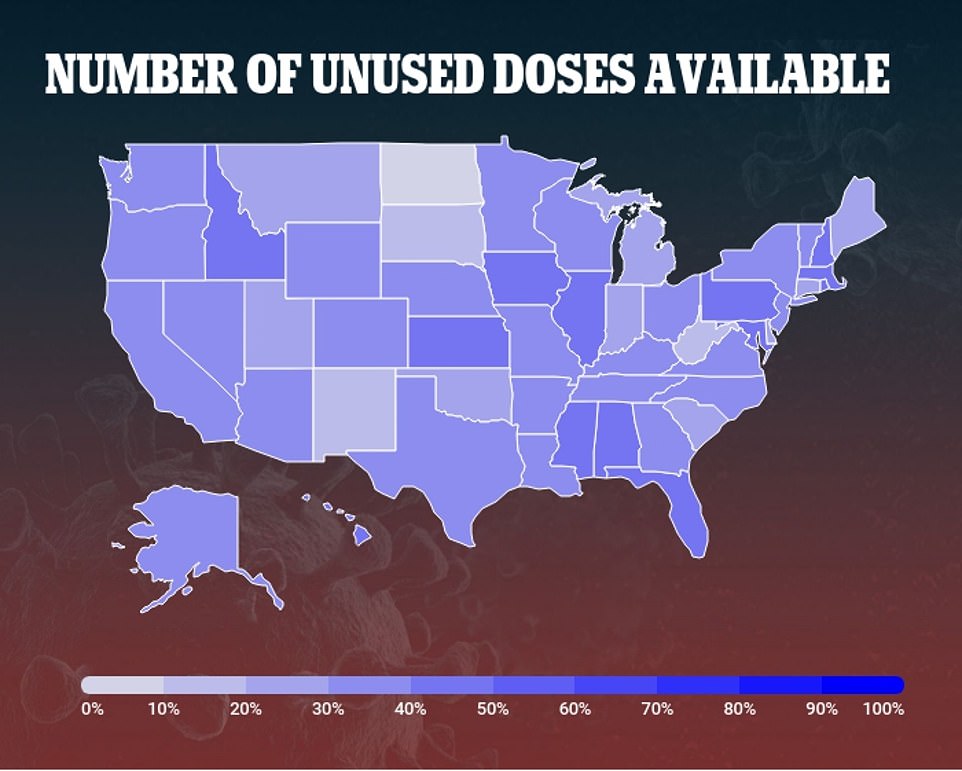 A recent report revealed the Biden administration has still yet to locate 20 million COVID-19 vaccine doses distributed to the states in December. Data shows nearly 50 million doses have been distributed

Meanwhile, in Rhode Island, the state announced, COVID-19 vaccinations ‘will not be happening on Monday’ at any regional clinics.

Residents who had appointments for Monday will be contacted directly about rescheduling.

Counties in Connecticut, Maryland and Virginia have also reported closures due to the storm.

Meanwhile, as Biden as sough to ramp up vaccination efforts, several states have been plagued by tech glitches and crashing websites.

Meanwhile, a Politico report on Saturday revealed the Biden administration has still yet to locate 20 million COVID-19 vaccine doses distributed to the states in December.

Prior to taking office, Biden had promised to tackle the pandemic with an effective COVID-19 response plan and later announced a rather ambitious goal to distribute 100 million shot in his first 100 days.

But the president and his team have since found themselves floundering and grappling to keep the virus under control while simultaneously dealing with a vaccine shortage.

‘They are planning. They are competent. It’s just the weight of everything when you sit down in that chair. It’s heavy,’ a source with knowledge of the situation told Politico. 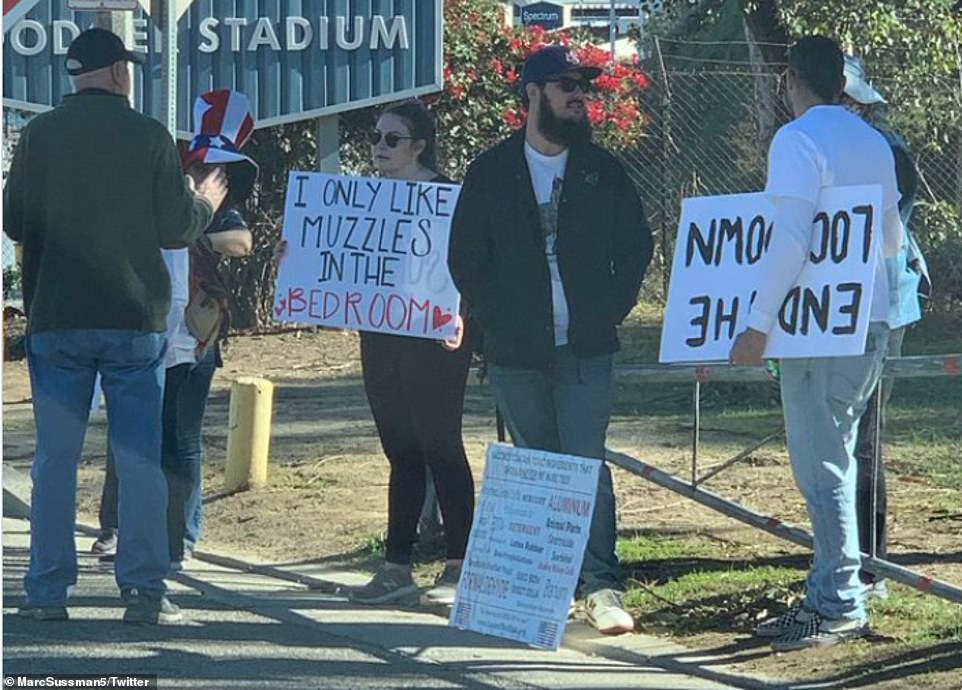 A group of between 40 and 60 people carried signs with baseless claims about the dangers of vaccines on Saturday, causing the main entrance at mass-vaccination site Dodger Stadium to shut down for more than an hour (above) 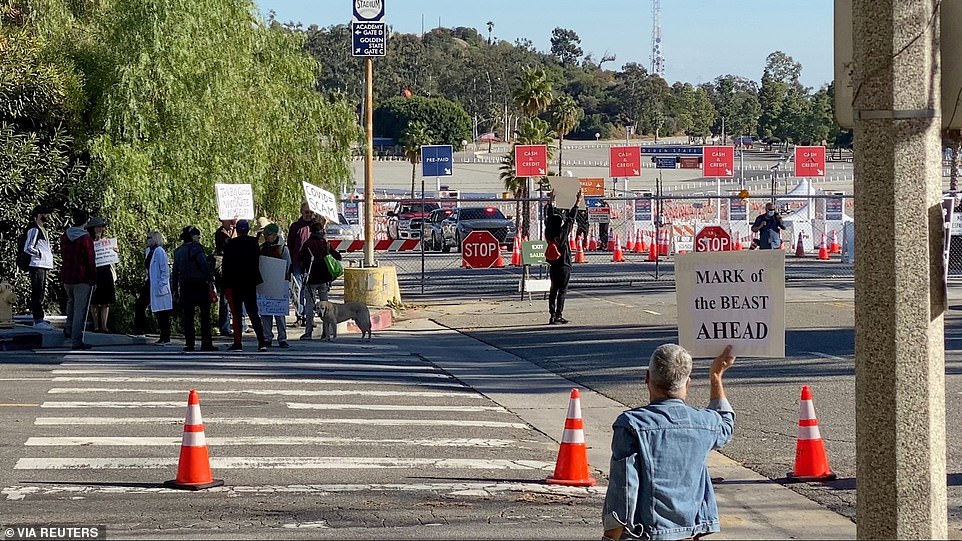 The demonstrators left by 3pm, with no violence or injuries reported, but city lawmakers wondered why the group wasn’t treated more aggressively. Pictured: Protesters hold placards near entrance of vaccination center at Dodger Stadium on Saturday

There is also the problem of anti-vaxxers causing immunization sites to shut down.

On Saturday, a group of protesters forced the Los Angeles Fire Department to close the main entrance to Dodger Stadium – mass vaccination site – to shut down for more than other.

The group of between 40 and 60 people, none of whom were wearing masks, carried signs with baseless claims about the dangers of vaccines.

The demonstrators left by 3pm, with no violence or injuries reported, but it is unclear how many people missed their appointments due to the temporary closure.

Meanwhile, some lawmakers have wondered why the group was not treated more aggressively in the same way Black Lives Matter protesters were over the summer.

‘That does not help them do their job. When some people get coddled and others don’t.’ 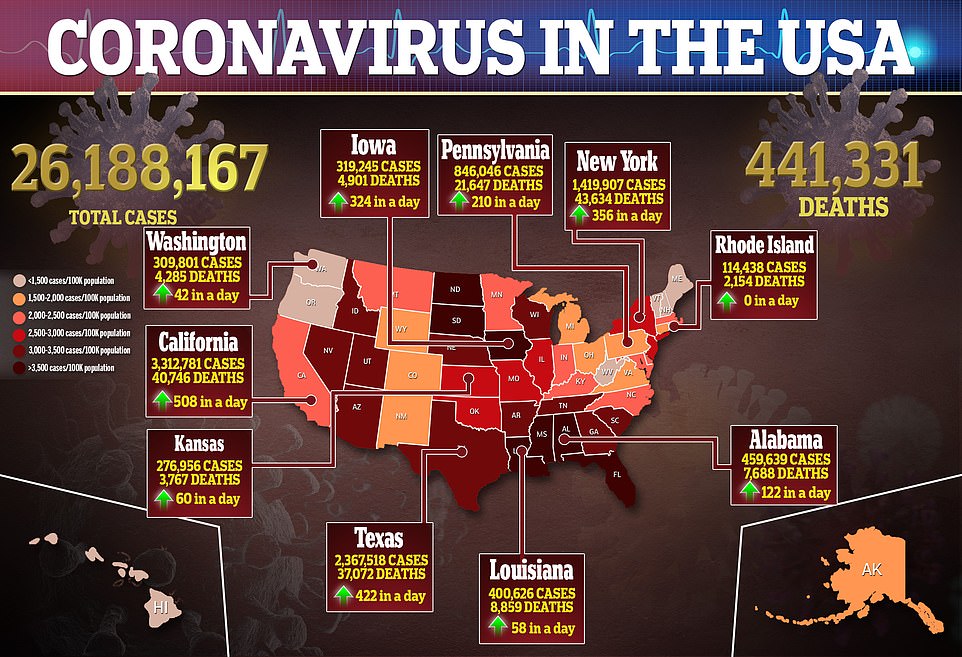