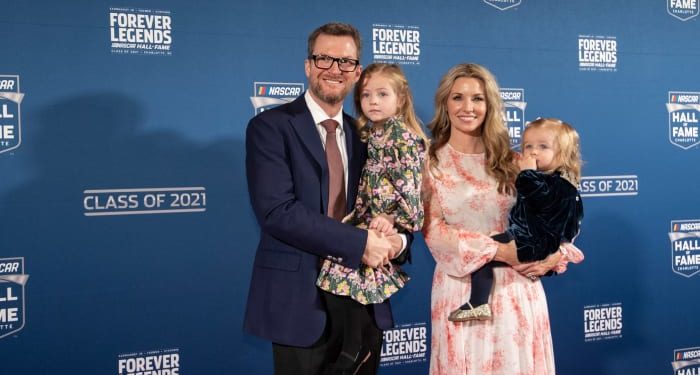 
Dale Earnhardt Jr. is among the 2021 NASCAR Hall of Fame inductees who will be added to racing history on Friday evening.

Earnhardt joins his father, who died in a final lap collision in 2001, in the Hall of Fame, becoming the seventh father-son duo to accomplish this honor. The others include Lee and Richard Petty, Lee and Maurice Petty, Buck and Buddy Baker, Bobby and Davey Allison, Ned and Dale Jarrett, and founding family members Bill France Sr. and Bill France Jr.

The younger Earnhardt tallied 26 wins in his career, including two Daytona 500s. Dale Sr. won a record-tying seven championships and ranks eighth all time with 76 wins.

Earnhardt retired after the 2017 season and now only competes in a single Xfinity race each year while also working as an NBC Sports analyst. When asked if being a part of the Next Gen testing at Daytona recently made him want to return for the Daytona 500, Earnhardt was quick to shut it down, adding, “I’m old—47 years old. Take a guy like William Byron. He’s young. He’s a risk-taker. And I’m done taking risks.”