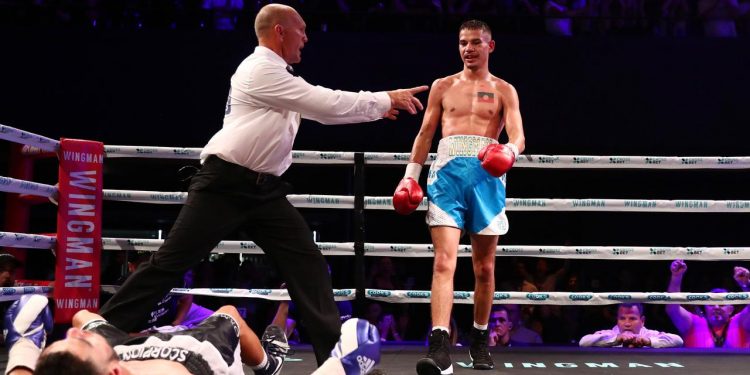 
He delivered officially the best knockout in Australian boxing last year, now 23-year-old Dana Coolwell has promised to ‘drown’ his Venezuelan opponent in the bid for a youth world title on Wednesday night.

Coolwell (7-1) became the Australian super featherweight champion in December with a sensational upset defeat of Miles Zalewski in the 10th round, with a knockout that was anointed the best of the year by the Australian boxing federation.

The event takes place at Fortitude Music Hall in Brisbane on Wednesday, with live coverage on Fox Sports 507 on Foxtel and Kayo from 7pm AEST.

But there was drama at Tuesday’s weigh-in when Luces weighed in a feather over the 59.0kg limit. Mununjali boxer Coolwell had no problems as he weighed in at 58.75kg.

Luces managed to get down to 58.95kg on a second attempt by stripping nude, ensuring the bout was made official.

Undefeated 22-year-old Luces, at 175cm stands two cm taller than his Australian rival. And the southpaw boasts a formidable knockout record – having won 14 of his 16 bouts by way of knockout.

Luces declared: “This signifies the world to me. I’m here to show everyone what I’m here to do. I didn’t come to Australia for a holiday!”

His Australian opponent said: “This is very exciting. A massive opportunity for me and I’m going to take it with both hands.

“I’m just sticking to my game plan. And if the stoppage comes I’ll be going for it … I’ll take him to the deep end rounds. And I’ll drown him.”

The bout was set at a 74kg catchweight over eight three-minute rounds, but Davidson weighed in at 74.4kg while Mikhailovich came in at 73.7kg.

Davidson came in at 73.9kg on his second attempt after running the streets of Brisbane for an hour..

From 12-year-old addict to rising boxing star: The wild life of Andrei Mikhailovich

Nevertheless, 24-year-old orthodox Mikhailovich declared: “I’m looking forward to a good fight tomorrow, I can’t wait. It’s awesome to be in Brisbane … and to put on a show.”

He promised: “Just a great performance from myself. I prepared to be great. This is my moment tomorrow night.”

Southpaw Davidson has not fought since December 2018.

But he said he was excited to be back from his ‘time out’, saying: “I’ve been busy with family. I had a little complication with my old manager. But sometimes you just need to take a time out from boxing and focus on your family, which I did. I’m happy I’m in the ring today.”

“I was born ready,” he declared.

Fijian Naliva clocked in at 90.0kg, while knockout machine Whateley came in a touch over that at 90.05kg as he eyes a ninth knockout win in his tenth bout.

At 195cm, the 31-year-old towers over his battle-hardened 178cm opponent, who is four years his senior.

“I’m very excited mate,” he told Main Event’s Ben Damon. “Just happy to be back in a boxing ring, that’s for sure.”

He declared a win would be ‘very big’ for his career.

“I’ve been out of the ring now for a while. I’m just excited to be back in there. I’m going to look for a big devastating knockout. Especially since I’m on telly, I want to make a statement. I’ll be doing just that.”

Naliva said he simply felt “good” about the upcoming bout, declaring: “I’m going for a knockout.”

29-year-old Sokolov won two of his three bouts by knockout, whereas Pope will be chasing his first-ever professional knockout in the highly-anticipated matchup.

Before that, Ben Kite (18-6-1) faces Ben Horn (4-3) for the vacant Australian Welterweight Title. Kite weighed in at 66.55kg while Horn weighed in at 66.6kg. The duo are 31-year-old orthodox fighters from Brisbane, but there is one massive difference: Kite has fought 166 rounds to Horn’s 33.

Pampellone – who has won six of his ten bouts by knockout – is making his Australian debut and weighed in at 78.9kg compared to Melbournian Miller at 79.25kg.

Tacos, treehouses, virtual golf: top firms try to bribe workers back to the office | US news

Tacos, treehouses, virtual golf: top firms try to bribe workers back to the office | US news