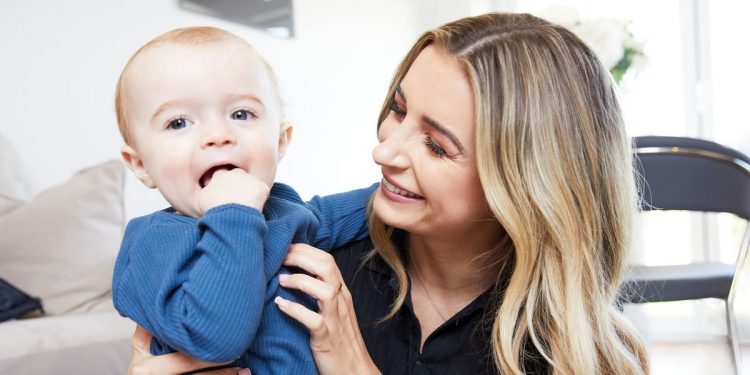 
Dani Dyer, 25, wants to help other new parents adjust to life with a baby as she shares the battles she faced transitioning to motherhood. The mum-of-one said that she wished she hadn’t compared herself to other mums as much as she did in the first few months

Dani Dyer has bravely opened up about her struggles as a first-time mum in a bid to help other new parents.

The Love Island star, 25, who welcomed son Santiago in 2021 says she spent a lot of time comparing herself to other mums in the early days.

Reality TV star Dani said: “I remember when Santi was born, all I did was compare, and I always used to think, ‘Why can’t I breastfeed?’ I really, really struggled with that. And I put so much pressure on myself.

In her quest to help others, the daughter of EastEnders actor Danny Dyer has been announced as an ambassador for the BBC ’s Tiny Happy People and, in an article on their website, reveals she often questioned herself after becoming a new parent.

Dyer recalled some of the questions she found herself asking, including: “Are you doing ‘the parent thing’ right? Is everyone judging how you’re coping? Is the life you knew pre-baby gone forever? How can you meet other parents in the same situation?”

Her son Santiago was one in January this year
(

It was launched in July 2020 by the Duchess of Cambridge with the aim of supporting parents and carers in developing the language and communication skills of their children aged up to four years old.

As an ambassador for BBC Tiny Happy People, Dyer will open up about her experience of becoming a single parent at a young age in the hope that she will be able to help others.

She revealed that during her first year with Santiago – also known as Santi – she spent a lot of time comparing herself to other parents.

She wants to help other new parents find their feet
(

“I honestly wasn’t prepared for the rush of hormones. It was a little bit hard for me at the beginning. I really did struggle,” she said.

The Tiny Happy People website offers a variety of resources to parents, including fun, easy-to-do activity films for babies, toddlers and pre-schoolers that all support language development, articles with tips and advice on parenting-related topics and a child development section that covers the science behind brain development.

She and her dad teamed up for a hit podcast ‘Sorted with the Dyers’, where she also offered help and advice

Dyer also revealed she is lucky to be well supported by her father and mother, Joanne Mas, something that has helped her a lot, particularly as a single parent.

“The way they have been there for me is honestly just such a dream,” she explained.

“There have been some long nights, if Santi’s not been well, where I really struggled and I’ve just needed to have a chat or a sleep in the afternoon. And they’ve been there for me.

She admitted that she struggled with the change in hormones

“Knowing I’ve got them, I am blessed with that.”

As part of her role as an ambassador, Dyer will be filming videos for the Tiny Happy People social channels and sharing her daily life with Santi alongside hints and tips for parents and carers.

The Happy Tiny People resources have been developed with the help of leading experts in the fields of child and language development to ensure parents and carers are being offered accurate advice.

Long delays could be to blame for victims dropping rape cases, MPs say