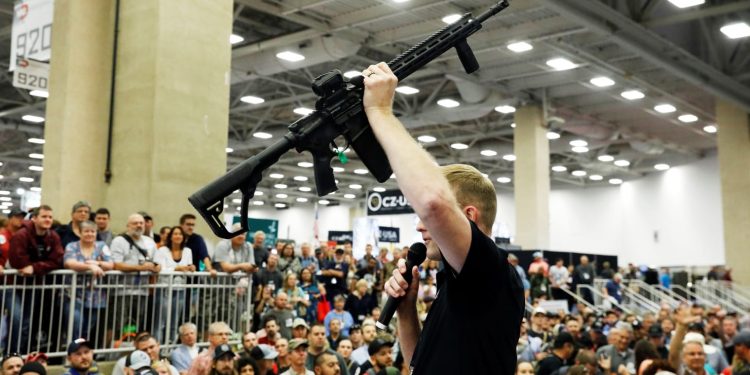 On a Memorial Day weekend when we honor those who died in service to our country, the company that manufactured a weapon of war used to kill 19 children and two adults in a Texas elementary school had planned to hawk its wares at the gun industry’s annual collective disgrace.

But in the aftermath of Tuesday’s slaughter in Uvalde, Daniel Defense, is no longer slated to join all the other profiteers of violent death at this weekend’s NRA convention in Houston.

Up until Wednesday afternoon,the company was to have occupied Booth 4839, conveniently close to the cafe at the George R. Brown Convention Center, amid what the NRA terms “14 acres of guns and gear.”

The items on display would have included the DDM4 V7 rifle, the model used with such horrific effect at the Robb Elementary School in Uvalde.

“A perfect rifle for everybody,” a Daniel Defense promotional video says.

The roster of exhibitors indicates that Booth 4839 has been taken over by the NRA iself. The offerings there will now include, “Membership programs and services, commission based dealer programs, manufacturer programs, legislative initiatives and awareness, firearms training, education and safety programs, NRA Advancement, Foundation, Friends of NRA and NRA Publications.”

Daniel Defense may still benefit from Tuesday’s horror. The company reported that the 2012 slaughter of 20 kids and six adults at Sandy Hook elementary school in Connecticut boosted sales to folks fearing an assault weapons ban.

The now $100-million-a-year company was founded by 59-year-old Marty Daniel of Georgia. He started out making garage doors after flunking out of Georgia Southern University twice before finally graduating. A company history on its website suggests he might not have gone into guns if he had been a better golfer.

“Daniel Defense got its start because Marty’s golf game sucked. He would spend most of his free time unwinding on the golf course, until the day a friend invited him to shoot his AR,” the story says. “Every shot he fired filled him with a satisfaction he’d never before experienced. Marty would purchase his first AR this same year.”

That was in 1999. He manufactured his first gun a decade later. It was the DDM4 V1. The M4 indicates a kinship to the miilitary M4 that Colt produced for the U.S. armed forces. Daniel joined Bushmaster and Smith & Wesson and other companies in selling variations on a weapon of war to civilians.

He was soon doing well enough to film a commercial he hoped to air during the 2014 Super Bowl. It featured a fictional former Marine at home with his wife, gazing down at their baby.

“My family’s safety is my highest priority,” a narrator says. “I am responsible for their protection and no one has the right to tell me how to defend them. So I’ve chosen the most effective tool for the job… Daniel Defense.”

The NFL deemed the ad inappropriate and it never aired. Daniel Defense continued making other variants, and went uncensored when it tweeted a photo in which a youngster cradles a semi-automatic rifle while seated on a carpeted floor.

“Train up a child in the way he should go and, when he is old, he will not depart from it,” the caption read.

The tweet was posted on May 16, which happened to be Salvador Ramos’s 18th birthday. He was still three years too young to buy a beer in Texas, but old enough to buy two AR-15 style assault rifles in the next two days. Along with 375 rounds of 5.56 ammunition. One of the weapons was a DDM4 V7.

A receipt for the online purchase posted on an Instagram account associated with Ramos shows the price was $1,870, plus $154.28 sales tax, for a total of $2,024.28. Ramos also posted a photo of his two rifles.

“My gun pics,” he wrote in a posting to a young woman he had met online.

He might as well have said “dick pic.” You do not need a psychiatrist to divine the attraction these weapons have for woefully insecure young men who yearn to be instantly alpha.

Ramos left the other rifle in his grandmother’s pickup truck when he drove up to the school late Tuesday morning. The DDM4 V7 was his weapon of choice when he stormed inside to start shooting kids.

The local school district has instituted numerous security protocols and has its own police department. One of its officers confronted Ramos, and two Uvalde cops responded soon afterward.

But all of that was not an immediately effective defense against the Daniel Defense product. The weapon’s firepower enabled Ramos to kill 21 people, including a teacher married to one of the school district’s cops. Ramos had at least seven magazines with 30 rounds each and he kept firing until he was killed by a heroic U.S. Border Patrol agent.

Of course, the slaughter of 19 youngsters was not about to dissuade the NRA from going ahead with its convention. Former President Trump and Texas Gov. Greg Abbott made it known that they will still be addressing the gathering.

Anybody who called Daniel Defense’s main number on Wednesday got a message saying nobody was available and to call back. Marty Daniel could not be reached. The Daniel Defense Twitter account was restricted to approved followers, and a request for approval by this reporter was left “pending.”

But in the early evening, the company responded to a message left with the owner’s wife, Cindy Daniel.

“Sad day, that’s for sure,” the spokesman, Steve Reed, said.

A short time later a company statement arrived by email.

“We are deeply saddened by the tragic events in Texas this week. Our thoughts and prayers go out to the families and community devastated by this evil act. As reported in Governor Abbott’s press conference, it is our understanding that the firearm used in the attack was manufactured by Daniel Defense. We will cooperate with all federal, state, and local law enforcement authorities in their investigations. We will keep the families of the victims and the entire Uvalde community in our thoughts and our prayers.”

Reed did not respond to a query about the company and the NRA convention. But a check of the roster showed that Daniel Defense will no longer have an official presence when the exhibition hall opens on Friday. With or without Booth 4839, Daniel Defense will remain one of the biggest profitable purveyors of semi-automatic rifles. Its website says it has the DDMP4 V7 in stock.

And families in Uvalde are prearing to bury 19 murdered children..