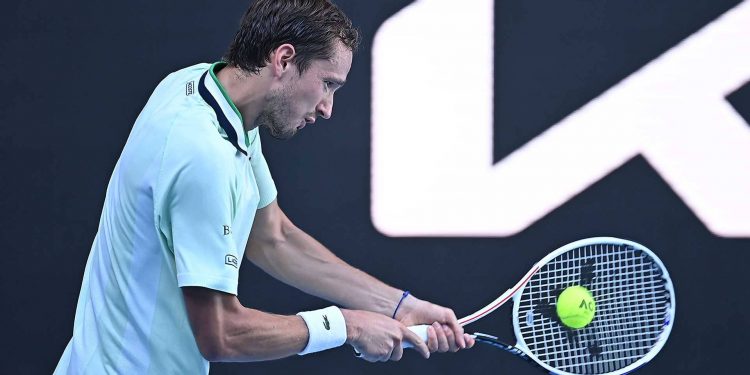 
It was business as usual for Daniil Medvedev Saturday against Botic van de Zandschulp as he showed little sign of fatigue following his epic win over Nick Kyrgios to reach the fourth round at the Australian Open.

The second seed, who battled past Kyrgios in four sets on Thursday, produced a dominant performance against van de Zandschulp, downing the Dutchman 6-4, 6-4, 6-2 to move his title bid into week two in Melbourne.

The Russian was in control of the match from the third game when he broke the World No. 57 on Margaret Court Arena. Medvedev saved all three break points he faced and fired 26 winners, including 10 aces, to advance after one hour and 55 minutes.

“I am really happy because every round at a Grand Slam is very tough,” Medvedev said in his on-court interview. “Even today the score doesn’t show this, but I feel like it was a much tighter match than the score showed. Hopefully I can play here many more years. I hope there will be more good times than bad times otherwise it doesn’t work.”

The 25-year-old now leads van de Zandschulp 2-0 in their ATPHead2Head series, with their other meeting coming in the quarter-finals at the US Open in September. Medvedev defeated the 26-year-old in four sets that day, before he went on to win his maiden major trophy at Flushing Meadows.

With his victory, Medvedev has now reached the fourth round in Melbourne for the fourth year in a row. The World No. 2’s best result at the first slam of the season came 12 months ago when he advanced to the final (l. to Djokovic).

The 13-time tour-level titlist, who is now 6-1 on the season, will next face Melbourne Summer Set finalist Maxime Cressy or Australian wild card Christopher OConnell.

Medvedev sat deep behind the baseline on return against van de Zandschulp, neutralising the Dutchman’s serve to good effect with his flat ball striking. The Russian never looked rushed from the baseline, dealing with everything thrown at him as he found his rhythm to cause van de Zandschulp problems.

The second seed took his opportunities at the start of all three sets and sealed the win when van de Zandschulp fired a forehand wide.

Van de Zandschulp was making his second appearance at the Australian Open, having lost to #NextGenATP Spaniard Carlos Alcaraz in the first round on debut last year. The Dutchman’s big breakthrough came at the US Open in September, where he reached the last eight at a major for the first time.

Did You Know?
Medvedev is looking to become the first player to follow his first Grand Slam title with his second major at the next event