Daniil Medvedev undergoes procedure, will miss 1-2 months due to hernia 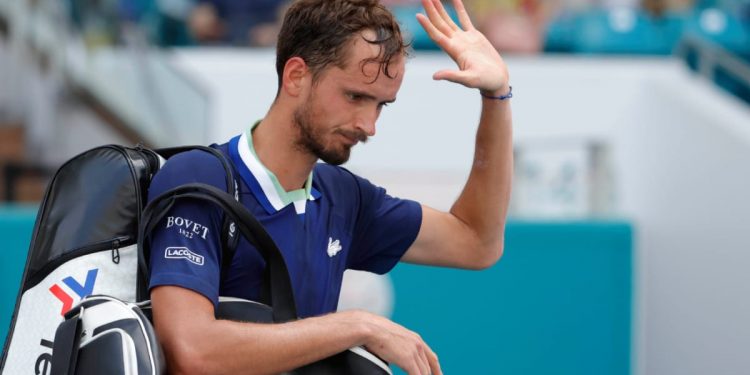 The World No. 2 tennis player Daniil Medvedev tweeted on Saturday that he had a “small procedure” to try to fix a small hernia that he’s had for the last couple months.

The Russian has been playing with the hernia for months but he will now miss one to two months of playing time while recovering from the procedure.

It was a quick turnaround for Medvedev as he just played on Thursday in the Miami Open, losing to Hubert Hurkacz. If Medvedev would have won this match, he would have taken back the World No. 1 ranking from Novak Djokovic.

The No. 2 player still has a chance to earn back the No. 1 spot this year, even while he is not playing. In the ATP rankings, Medvedev only has 55 fewer ATP points than Djokovic. Depending how Djokovic does in the next couple tournaments, if he is allowed to play in tournaments due to being unvaccinated for COVID-19, Medvedev could take over the No. 1 spot.

With the recovery, Medvedev is expected to miss most if not all of clay season. Clay season begins next week at the Fayez Sarofim & Co. Championship in Houston. Roland-Garros, also known as the French Open grand slam tournament, ends the clay season in early June.

Medvedev won’t have a title to defend during clay season, though, as he has yet to win a tournament on clay court. Last year was his best Roland-Garros result, as he reached the quarterfinals.

However, the Russian may have to denounce President Vladimir Putin ahead of Wimbledon, which starts at the end of June. A decision has yet to be made about this.