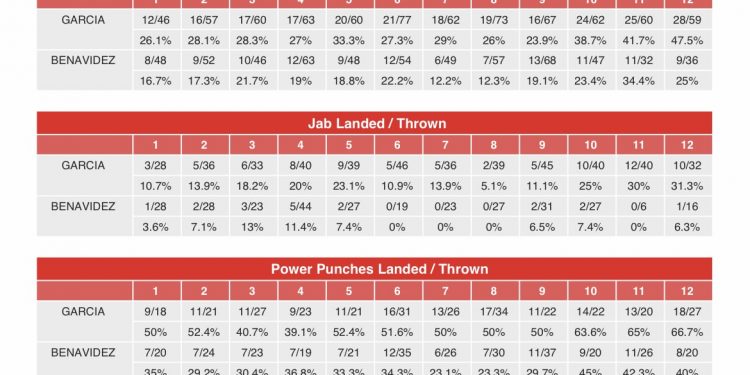 
Danny Garcia (37-3, 21 KOs) hadn’t been in action in over eighteen months but rust didn’t affect him much in his super welter debut,  as the ex 140 pound perennial player beat Jose Benavidez (27-2, 18 KOs) by majority decision Saturday night at the Barclays Center in Brooklyn, NY.

The final scorecards were 114-114, 116-112, 117-111 in favor of Garcia in a fight that wasn’t as close as the near scorecards reflected. No clue where that fight was a draw, but that is how one judge saw it. That’s par for the course, as any even casual fan could tell you.

Benavidez, the older bro of super middleweight standout David Benavidez started the vibe off different as he entered the ring to Schubert’s “Ave Maria.” Was he trying to get Danny into a mellow mode? That cut wasn’t getting those in attendance at the Barclays Center into a “Thunderstruck” mode, and Jose’s effort could’ve used some AC/DC energy.

Once the actual bell rang, Garcia looked to focus his attack on the body of the 30 year old Benavidez. Usually we get feeling out first round, but Garcia looked to show his hand speed off early on as he was more active than Benavidez in the opening stanza. Benavidez adjusted to be more fluid, but Garcia, who for a long spell hasn’t used the nickname “Swift,” looked to start getting in a rhythm and was getting timed up on counters and combinations.

The Showtime/PBC broadcast cut to David Benavidez, wearing a pricey outfit that resembled the furniture sets won on “The Price Is Right” in the late-1980s. To the surprise of no one listening to the broadcast, he thought his brother Jose had won the first two rounds against Garcia.

Once the third round started that’s when Benavidez had success landing his best punches of the night. That success was short-lived as the body shots from Garcia were still coming in plenty. As the fourth round wound down, Benavidez was seemingly on the receiving end of whatever Garcia was throwing.

A push-off late in the fifth round led to a stern talking by referee Steve Willis, in a bout that was becoming a one-sided clinic by Garcia, the 34 year old from Philly.

At the close of the sixth round, Benavidez was left with no answers for Garcia outside of taunts and acknowledged reactions after Garcia landed body shots. As the fight marched on, it was more of the same. Benavidez couldn’t get anything going, and a lot of what he was throwing wasn’t landing on Garcia. Benavidez was a step or two behind all night long.

Garcia made it look easy in his first 154 pound clash. What is next for Garcia is something I hinted at on the “Say What You Say Boxing” podcast with Tony Harrison, who was in the building for the fights.

Gary Antuanne Russell and Rances Barthelemy got the action going from Barclays, and it ended way too soon for everyone’s liking, except Russell. The latter won by a very debatable sixth-round stoppage in a 140 pound clash.

Fifty seconds of round six is the official time of the bout, which saw Russell (16-0, 16 KOs) win a second straight stoppage which featured some questionable referee involvement.

Russell gave up about four inches of reach but the age difference of eleven years was heavily on display against the former two-division champion in Barthelemy (29-2, 15 KOs). From the onset, Russell went to press the body against Barthelemy.

Barthelemy pre fight noted he would bring the fight to Russell and surprise him with his power which he did towards the end of the opening round with a vicious right to the body that forced Russell to clench and hold on.

Russell went back on the outside to establish his jab, but Barthelemy could hang in and wait to counter the charging Russell coming in the second round. Barthelemy wasn’t going to match Russell’s output, but his ability to switch stances from his normal southpaw stance kept him off balance early on. That also marked the normally fast-firing Russell as unable to let his hand flow like he used to.

Towards the end of the fourth round, Barthelemy landed a good left set up by a jab that buckled Russell as the bell sounded.

This was an interesting scrap as the fight reached the halfway point. The pace of the battle favored Barthelemy, but many were waiting for one punch from Russell to change the tide. That happened in the sixth round from Russell with a looping right hook which sent Barthelemy down.

What happened afterward will go down as the worst stoppage of the year winner as referee Shada Murdaugh waived the fight off. The crowd and Barthelemy’s corner were disappointed in the stoppage and made that clear cervdlly

Good win for Russell, but the bigger story is Shad(y)a Murdaugh’s tremendously poor stoppage in what was an enjoyable opener on Showtime.

Polish New Yorker Adam Kownacki started fast but faded late in his heavyweight tango. That fade cost him in front of the hometown rooters as he lost to Ali Eren Demirezen by a unanimous decision.

The co-main event started hot as Kownacki looked to rebound after getting double dinged by Robert Helenius. Kownacki came into this fight looking slimmer and he was faster than previously early on, throwing solid combinations. This version looked more like the Kownacki that was looking to break Compubox records in his win against Chris Arreola than the two disastrous stoppages against Helenius.

Kownacki had the crowd behind him as the second round wound down. The volume punching kept Demirezen off kilter six minutes in. Demirezen wasn’t going to win this fight sitting flat-footed against Kownacki, who was throwing and landing at a two-to-one pace in the contest. What was able to elevate Demirezen in the battle was his ability to counter with the overhand left which was open quite often. Demirezen, in the third round, was able to land a lot more, which continued into the fourth as he started to get warmed up.

Demirezen, in the fifth round, was able to have his best rounds of the warfare as he was slipping Kownacki and peppering his head with combinations. As the fight closed the halfway mark, they tallied near 900 punches in a very close heavyweight scrap. The pace in the fight’s second half wasn’t at the same breakneck speed as fatigue was apparent, but they continued to stay close for most of the bout and trade.

The downside to that is that Kownacki punched himself out as the last few rounds he was getting outworked by Demirezen. He also was taking too many punches cleanly as the fight wound down.

“So many memories in this building, I don’t want to go out like this,” Kownacki said post-fight when Jim Gray asked what’s next for him.

This was a must-win fight for the Polish heavyweight, but he came up just short. Demirezen is on a six-fight win streak.