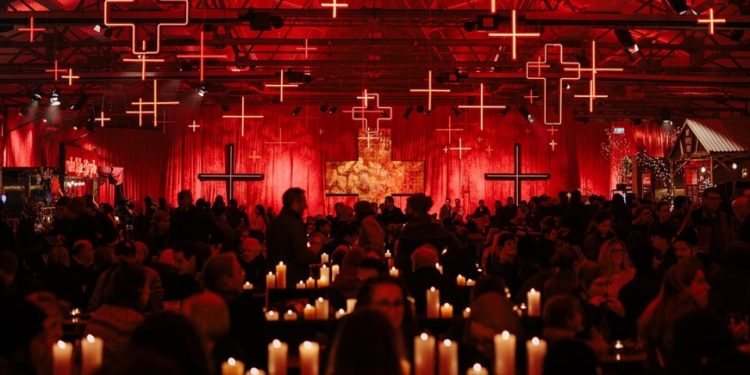 
Tasmania’s menacing mid-winter music and arts festival Dark Mofo has announced its full lineup for the 2022 season, featuring none other than Grammy-nominated artist The Kid Laroi.

We wouldn’t have guessed the Kamilaroi singer would headline the program this year, but Dark Mofo is gearing up for a “new era”.

The Kid Laroi shot to global fame last year after his song Stayfeaturing Justin Bieber, was picked up on TikTok and turned into a viral dance.

Dark Mofo announced its 2022 theme of “resurrection” earlier this year, which creative director Leigh Carmichael described as the “beginning of a new era” for the festival, “exploring the ideas of rebirth, reincarnation and new life”.

New beginnings is an unsurprising theme for a festival that came under fire in 2021 after a Spanish artist asked First Nations people to soak the Union Jack in their blood.

It was pitched as a statement “against colonialism”, but as Wirlomin Noongar writer and researcher Cass Lynch wrote in the Overland literary journal: “To ask First Nations people to give blood to drench a flag recreatesnot critiques, the abhorrent conditions of colonisation.”

After immense backlash, organisers announced the artwork by Santiago Sierra had been canned.

An apology was issued, too.

The festival is hosted by the Museum of Old and New Art (MONA), founded by Tasmanian professional gambler David Walsh.

So successful was Walsh in his gambling that he built MONA to rid himself of the guilt he felt from making millions.

“Like the stockmarkets, when somebody wins, somebody loses,” Walsh wrote in his 2014 memoir, A Bone of Fact.

“Prior to building MONA, I hadn’t done anything for the community to benefit from that I could be proud of.”

And a museum was born.

This year’s two-week festival, which runs from June 8 to 22, will feature a range of art installations by 100 artists from around the world.

Another must-see is Hobart-based Sabio’s Holy Mother of God: Emergency Doll House. Sabio will fill a three-storey building with a “carnivalesque journey into the subconcious” through projection mapping, sculpture and animation.

And the late Sir Sidney Nolan, one of Australia’s most significant modernist artists, will feature in the exhibition For the Term of His Natural Life.

Dark Mofo’s iconic Nude Solstice Swim will make a return as well, in which hundreds of people (bravely) dive into the chilly open water to wash away their sins.

That is very much the tip of the iceberg. You can find the full lineup here.

No stranger to controversy

Raising eyebrows is a given at Dark Mofo.

Who can forget the time the festival sent shockwaves across the country when a certain performance, directed by Austrian artist Hermann Nitsch, was announced in 2017.

The centrepiece was a freshly slaughtered bull.

At the time, Carmichael clarified that no live animal was slaughtered as part of the performance, although it did feature “meat, fish, fruit and blood, live performers and an orchestra”.

150.Action, as it was titled, concluded with a mock fight over the entrails, with performers drenched in blood from head to toe.

Ahead of the performance, over 22,000 people signed a petition calling for its cancellation. Animal activists were disgusted.

If you are squeamish, we would advise against googling the performance.