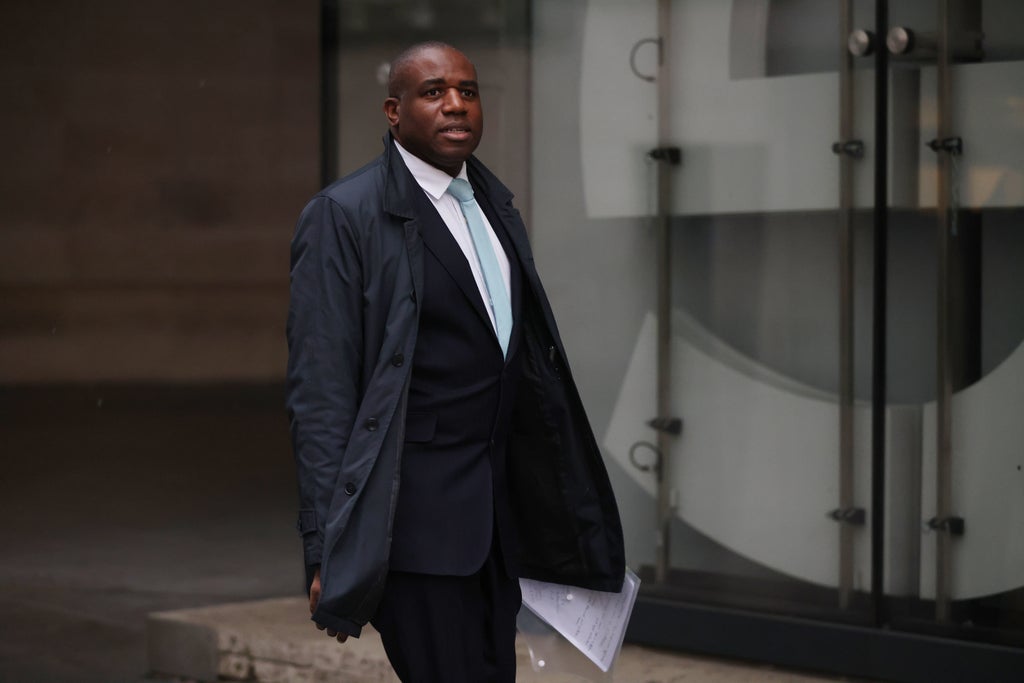 Britain should introduce a US-style law targeting proxies used by oligarchs to shield their wealth, Labour’s David Lammy has insisted.

In an interview with The IndependentMr Lammy also insisted the UK’s policy towards Ukraine would not change if Boris Johnson was ousted from No 10 amid the ongoing partygate scandal, despite ministers insisting it is vital the prime minister remains in Downing Street because of the war.

With only a handful of Conservative MPs calling on the prime minister to resign after he was found to have broken the law, the Labour frontbencher added those standing by him should examine their “conscience”.

Proposing a new law targeting proxies, Labour said it would mirror a mechanism already party of US measures and would require the government to take action against those who shield the wealth of sanctioned individuals and organisations.

“There is no point in Liz Truss’ tough rhetoric unless it is accompanied by tough action to support the Ukrainian people in their heroic struggle,” Mr Lammy said.

As the Russian invasion of Ukraine entered its seventh week, he added: “There are too many loopholes in the UK’s sanctions regime which are letting oligarchs propping up Putin’s illegal war off the hook.

“We need a new law to target those acting as proxies to sanctioned oligarchs, to squeeze Putin’s cronies harder and force Russia to retreat in Ukraine”.

A spokesperson for the Foreign Office insisted it was illegal “for individuals subject to an asset freeze to move monies or otherwise deal with their assets unless they obtain a licence from OFSI (Office of Financial Sanctions Implementaiton), which are only granted on specifically defined grounds, with justificaitons”.

They added: “Any party intentionally assisting a designated person in circumventing sanctions would be commiting a criminal offence”.

However, a Labour source claimed that without a specific law it is much harder to enforce in practice.

It comes after the UK government — alongside the EU — imposed a string of new sanctions on 178 Russian separatists in the Donbas region of eastern Ukraine, as the foreign secretary, Liz Truss, vowed to crackdown on those “aiding and abetting” Putin’s war machine.

Since the invasion started, the Foreign Office has also unveiled asset freezes on the Kremlin’s biggest banks, including Sberbank, military officials involved in the shelling of the besieged city of Mariupol, political officially who sanctioned the so-called “special operation”, alongside oligarchs with vast UK assets.

But Mr Lammy told The Independent action had been “very slow” and pushed for the government to “go further”, including measures on luxury goods, and asset freezes on family members and associates of those already subject to sanctions.

“The ban on luxury goods is principally bout sending a message, particularly to oligarchs, who enjoy products associated with the West, that they should not be able to do that,” he added. “It’s all part of putting the squeeze on not just Putin, but the people around him.”

The Labour frontbencher has also repeatedly called for Andrei Kelin, the Russian ambassador to the UK since 2019, to be expelled — a move resisted by ministers — for “parroting the lies of Putin’s rouge regime”.

After Joe Biden, the US president, suggested actions of “genocide” were being committed by Russian forces in Ukraine, Mr Lammy said it was down to a court to make the determination, but stressed that war crimes, including the bombing of a maternity hospital and the rape of civilians, were “being committed for sure”.

Speaking the day after Mr Johnson was issued with a fine by the Metropolitan Police – becoming the first sitting prime minister to be found to have broken the law – alongside the chancellor, Rishi Sunak, Mr Lammy said it was “unprecedented in our history”.

“I think this is bigger than party politics, this is really about the nature of our democracy and whether those who make the laws and break the laws are above the law, frankly. It’s why I think both he and Rishi Sunak should resign.”

Pressed on Conservative MPs standing by the prime minister, citing the invasion of Ukraine, the shadow foreign secretary insisted: “They should reflect very hard in terms of their conscience and in terms of the corrosive effect on our democracy.”

He also suggested a change in prime wouldn’t change the UK’s policy in relation to Ukraine, saying: “Given largely we’re in a bi-partisan position, where we share the government’s view on military aid, where we share the government’s view on supporting the sovereignty and territorial integrity of Ukraine, where we said we would go further on sanctions and said we would play our part in relation to the refugee crisis and the displacement taking place across Europe, I’m not sure replacing our prime minister would change at all our position on Ukraine.”

And asked whether he believed the prime minister would survive until the summer, he added: “I’ve been in politics way to long to start making predictions — I can’t answer that.

“Should he survive? No, he shouldn’t. It shouldn’t be about his survival, it should much bigger than the individual who occupies the role. Will he survive that? Well that’s in the hand of lots of forces.”