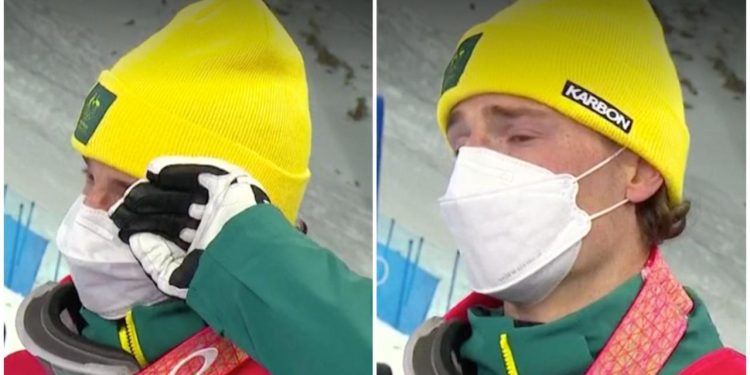 Speaking to Channel 7 after the disappointment, Graham couldn’t hide his emotions; breaking down as he tried to explain what he was feeling after a score of 65.13 fell short.

“It’s tough to describe,” Graham said. “This hurts a hell of a lot more than the collarbone did. Not going to lie.

Graham did not finish in his first run, having missed six weeks of training after surgery on a collarbone injury in December. His second wasn’t much better.

Given the injury as an excuse, Graham quickly shot that down.

“I don’t think this prohibited me at all,” he said. “Obviously it wasn’t the best lead-up, but I knew … I had a lot to give tonight.”

Graham added: “I feel a little bit embarrassed. I’m so much better than that, but yeah, I guess I’ll just suck it up. It’s going to take me some time. But right now, I’m really happy for Cooper and Brodie.”

Watching on from home, Graham’s parents Steve and Debbie only added further to the emotion of the moment.

“We’re OK,” Steve told Channel 7 from back in Australia. “But to see Matt in that interview was really tough. When he’s standing up in front of all of Australia in tears, that brings you to tears.”

Debbie added: “When he said that [he was embarrassed], that was heartbreaking.”

While Graham and James Matheson missed out on qualification for the first final, Brodie Summers and Cooper Woods-Topalovic managed to sneak into the top-20.

The top 10 athletes from Thursday’s run made it directly to the finals, so Summers and Woods-Topalovic needed to finish in the top 10 of Saturday’s qualifying.

They did just that. And from there, Woods-Topalovic and Summers went one better as they both snuck into the second final in the top 12 skiers.

American snowboard legend Shaun White said Saturday he will retire from competition after he attempts to defend his Olympic title in Beijing, citing the “little signs” from his 35-year-old body.

The three-time halfpipe champion said he intends to “squeeze every bit of fun and excitement” out of his fifth and final Games before bringing the curtain down on his storied career.

“In my mind, I think I’ve decided this will be the last competition,” said the man who has done more than anyone to bring snowboarding to the world’s attention.

“It’s this now, it’s that now — it’s all these little things adding up that’s taking away from days of practice that I would normally have.” White added that watching other riders — some half his age — pull off “heavier and heavier” tricks was also a factor.

He acknowledged that “everyone is catching up” to his level, and said just getting to Beijing was an achievement in itself.

White only booked his spot in the US team at the last moment, after injuries and a bout of Covid hampered his progress.

Bursting onto the Olympic scene in 2006, White was known as the “Flying Tomato” for his lustrous long red locks and explosive riding style.

But he regained his crown four years later in Pyeongchang with a dramatic last ride.

The skiathlon combines both classic and freestyle techniques in one race. Skiers use classical technique and skis for the first 7.5 kilometres, then swap to freestyle skis and technique for the second half.

‘Anything could happen’: The forgotten hero in Olympics’ ‘craziest’ moment