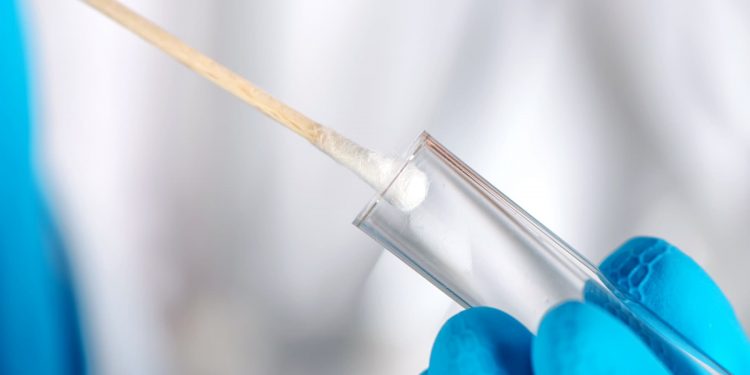 Monday, January 31, 2022 (Kaiser News) — What does it mean if a person’s rapid antigen test result comes back positive after five days of isolation due to covid-19? According to the experts, that person is most likely still carrying a viral load high enough to infect others.

“Anytime you’re positive by one of these rapid at-home covid tests, it means that you’ve still got a really high level of the viral protein, and most experts are interpreting that as a high level of virus present in your nasal passage,” said Matthew Binnicker, director of clinical virology at the Mayo Clinic and president of the Pan American Society for Clinical Virology.

The Biden administration is buying a billion rapid antigen tests to ship to American homes, aiming to address the need for increased covid testing and ease a nationwide shortage of tests. That influx of tests comes on the heels of revised federal guidelines that shortened the isolation period to five days after symptoms started or a positive test, followed by five days of masking.

It’s widely known that PCR tests, the highly sensitive polymerase chain reaction tests that detect viral genetic material, can pick up “dead” virus — material not capable of replicating — and yield a positive result for weeks after recovery, even when the person being tested is no longer infectious.

But virologists say that’s unlikely to be the case for the rapid antigen tests — which detect certain proteins in the virus and produce results within 30 minutes — that are headed for people’s mailboxes.

The odds are very slim, outside of a laboratory setting, that someone who gets a positive result on a rapid antigen test is a non-infectious person shedding large amounts of dead virus, said Kelly Wroblewski, director of infectious disease programs for the Association of Public Health Laboratories.

There are several reasons for this. First, according to the Infectious Diseases Society of America, “a major advantage” of rapid antigen tests is that they are somewhat blunt tools for picking up on the virus. Therefore, a positive result tends to mean the person has a high viral load, especially if symptoms appeared.

Second, it takes a substantial amount of virus material to register as positive on an antigen test, so a person would need a high level of dead virus sitting around in their nose or throat, and usually that signals a high level of live virus, too.

Third, even if someone did have a high level of dead virus hanging around, quantity alone wouldn’t be enough to trigger a positive test — viral proteins tend to lose their shape after a battle with the immune system, which can render them undetectable by antigen tests.

In a laboratory setting, a rapid antigen test could detect bits of “dead” virus, said Dr. Sam Dominguez, a pediatric infectious disease doctor and the medical director of the clinical microbiology lab at Children’s Hospital Colorado.

Federally funded scientists did just that to check whether rapid antigen tests would work as well on omicron as they did on other covid variants. However, Dominguez said, the odds of dead virus — and dead virus alone — triggering a positive antigen test in a human rather than a petri dish are low.

Unlike scientists in a lab, the human body in attack mode isn’t trying to inactivate viruses just so. It’s trying to obliterate them, proteins and all. “RNA can last longer than the proteins,” said Wroblewski, but neither substance is known for sturdiness. Even for scientists it’s somewhat of an art to keep proteins intact after inactivating the virus.

“It is not easy,” said Dr. Izabela Ragan, a veterinary scientist at Colorado State University who has branched into human virology, and who has worked for about two years on developing a vaccine against SARS-CoV-2. Her work hinges on killing the virus while preserving the shape of its proteins.

The confusion around how to interpret test results stems largely from this conundrum: While there is a wealth of testing options available, there is no foolproof way to gauge whether a person is actually infectious.

“I wish there was,” said Binnicker. “There is no test that we have for infectiousness.”

The best option is to take a patient’s sample, stick it in a dish of thriving living cells, and see what happens to the healthy cells. If there’s live virus, said Dirk Dittmer, a virologist at the University of North Carolina-Chapel Hill, “then the cells would die, just like the lung cells in your body would die.” But the finicky process takes about three days and can be done only in labs cleared to handle such pathogens, rendering it impractical.

Instead, the most widely available tests rely on totally different methods. They fall into two categories, typically called molecular tests and antigen tests.

Molecular tests, including PCR, look for specific bits of the virus’s RNA. With the exception of a few over-the-counter options, the tests are processed in a lab. They are capable of detecting tiny bits and pieces of the virus’s genetic material by copying whatever is floating around in a person’s sample over and over, amplifying it “a million- to a trillion-fold,” said Dr. Marie Louise Landry, director of the Clinical Virology Laboratory at Yale New Haven Hospital. That’s why, she explained, “PCR can detect very low levels of viral RNA for weeks and even months after infection, when a patient is no longer infectious.”

Rapid antigen tests, on the other hand, look for viral proteins rather than the virus’s genetic material. Many of them look for nucleocapsid or “N” proteins, which are abundant in infected cells and form a protective capsule around the virus’s genetic material. Unlike molecular tests, rapid antigen tests work only with what’s available — no copying or amplifying involved. These tests drag a person’s sample across a special piece of paper that contains a fence of antibodies designed to grab onto the virus’s N proteins. If enough proteins snag on the fence, a visible line of color will appear.

“Even single molecules can turn a PCR positive,” said Dr. Michael Mina, an epidemiologist who has been a vocal supporter of rapid testing throughout the pandemic and is now chief science officer for the health care company eMed. But, he added, it takes “about 100,000-1,000,000 molecules to turn the rapid antigen test positive.”

But what about the official recommendation that people with covid should isolate for five days at home — followed by five days of masking? Data from the world of sports, where resources and testing methods abound, offer a glimpse into how variable that period of infectiousness might be.

A preliminary study of NBA players and employees found that among 70 people infected with omicron, by Day 5 after their first positive test about 40% of them were still likely infectious.

“What we’re recommending is that between Days 5 and 10, you can take an antigen test. If it’s positive, you stay in isolation till Day 10,” said Binnicker.

CDC public affairs specialist Jasmine Reed said the best approach is to use an antigen test toward the end of the five-day isolation period if the person’s symptoms have improved. “If your test result is positive, you should continue to isolate until Day 10,” she said.

Wroblewski said an important gauge of contagiousness is the simplest: how someone is feeling.

“If you have a high fever and a cough, don’t go see people. I feel like we somehow forgot that part,” she said. “Let’s not put so much emphasis on the test and the technology that we forget basic infection control practices: that if you’re sick, stay home.”

KHN (Kaiser Health News) is a national newsroom that produces in-depth journalism about health issues. Together with Policy Analysis and Polling, KHN is one of the three major operating programs at KFF (Kaiser Family Foundation). KFF is an endowed nonprofit organization providing information on health issues to the nation.

This story can be republished for free (details).

Pandemic leaving you sleepless? A nightcap is not the way to fix it