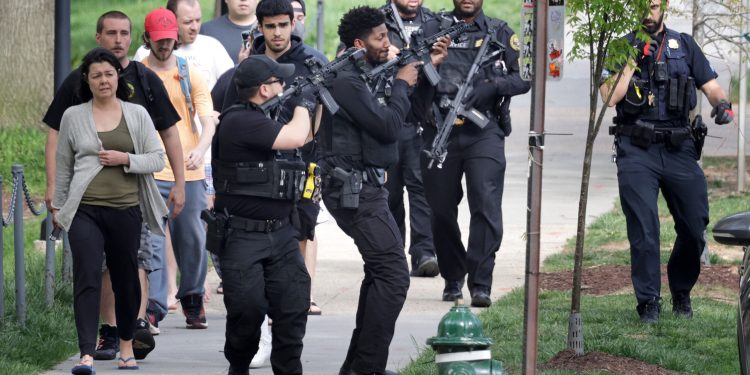 Police have identified a person of interest in a shooting that wounded at least four people Friday afternoon in Northwest D.C.

A person police believe was the suspect in a shooting in Northwest D.C. that injured four people has been found dead.

D.C. police Chief Robert Contee said they believe the man killed himself as officers were entering the fifth-floor apartment where he was staying. Contee did not identify him and said police were waiting to inform the next of kin.

However, earlier Friday, D.C. police identified Raymond Spencer, 23, of Fairfax, Virginia, as a person of interest who been “linked to social media postings” that emerged as part of the investigation, Assistant Police Chief Stuart Emerman said. Contee said they are no longer looking for Spencer.

Among the items police found in the apartment were several firearms, including long guns, multiple rounds of ammunition and handguns. Contee also confirmed the presence of a tripod.

“This was a sniper-type setup,” Contee said, adding that police believe there are no other people involved. “Obviously, his intent was to kill and hurt members of our community,” and this person was just “shooting randomly at anyone who was out there.”

Contee said that the gunman was shooting from north to south, and fired multiple rounds — “definitely in excess of 20 rounds.”

*PHOTOS* Multiple firearms and a large quantity of ammo were recovered inside the fifth floor apartment where the suspect was found deceased. pic.twitter.com/3mR2uoqFTM

The chief also reflected on the events of the D.C. sniper almost 20 years ago that left 10 people dead and terrified the region.

“We all recall back in that time when we had the sniper, the D.C. sniper situation unfolding. Unfortunately, that situation unfolded over the course of several days. This incident was over and resolved in a matter of a few hours,” Contee said.

Police are working to find out the motive in Friday’s shooting and will be working with partners, including the FBI and the Bureau of Alcohol Tobacco, Firearms and Explosives, to determine that.

Preliminary findings show that the weapons found in the apartment may have been obtained legally; police still do not yet know whether the video circulating on the shooting was livestreamed or whether it was recorded and posted.

The four victims were a 54-year-old man who is a retired police officer, a woman in her 30s, a woman in her mid-60s who was grazed by a bullet, and a 12-year-old girl who was shot in the arm. Assistant Police Chief Stuart Emerman said at a news conference earlier Friday evening that they were stable. The two adults had critical injuries and the girl had minor injuries.

Emerman also identified a fourth victim, Patricia Termini, who was grazed on her shoulder. She was treated at the scene and did not go to the hospital.

Termini told NBC Washington that she was picking up a student at the Edmund Burke School when she heard a burst of gunfire and ducked for cover in her car.

We just spoke with Patricia Termini, one of the victims in the Van Ness shooting. She was grazed in the shoulder by a bullet. She says she was picking up a student at the Edmund Burke School when she heard a burst of gunfire and ducked for cover in her car @nbcwashington pic.twitter.com/ThoGBzJhXA

Police asked residents to shelter in place during the investigation and avoid the area. That order was lifted shortly after 9:30 p.m. and roads in the vicinity reopened.

A huge law enforcement presence swarmed the area, and police went through several apartment buildings on the 2900 block of Van Ness Street. They led people out at a run, with some officers aiming weapons at the surrounding buildings as they went.

The echoing bursts of rapid gunfire rocked the normally quiet neighborhood that’s home to several schools and colleges and dozens of embassies. It sent frantic parents running from the scene and put Burke and other nearby schools on immediate lockdown.

Police sheltered with students at the elementary school and later brought them to the Cleveland Park Library to be reunited with their families.

“I looked into the eyes of parents who were terrified, and they were terrified thinking of what might happen to their children. This epidemic of gun violence in our country, the easy access to firearms — it has got to stop,” D.C. Mayor Muriel Bowser said in a letter Friday night.

The Van Ness shooting was one of several that happened on Friday. At least four other people were hurt in separate shootings across the District.

Bowser said it had been a “stressful and traumatic day for many people in our community.” She referred to the D.C. Department of Behavioral Health’s 24/7 hotline 888-793-4357, if people need someone to talk to.

‘Heard so many shots let out’

Jen DiGiacinto, a parent of a student at Burke, said she got a text from her son at about 3:30 p.m. saying a shooting was going on. She said her son told her, “Whoever was shooting hit the glass bridge” connecting the school’s two buildings, adding that he believes some students may have been hit by glass.

Alach Bailey told WTOP he was walking down the alleyway behind the Edmund Burke School toward Tenleytown when he “saw all the kids panicking and the parents panicking. And I realized it was a pretty big situation.”

A Howard University law student said she “heard so many shots let out” while she was driving onto Van Ness Street from the school, “and the entire street stopped.” We saw parents with their kids running, people with their groceries running.”

“We didn’t know where the gunshots were,” she said; “that’s how close they were.”

Anderson Hall said that he was on the ninth floor of his home about to take a nap when he heard several shots.

“I ducked for cover,” and then Hall said different law enforcement units came. He also said he saw people crying and screaming as they were brought out.

Earlier, the closures led to very heavy traffic on numerous streets near the Cleveland Park neighborhood and even on Wisconsin Avenue between Cathedral Heights and Tenleytown. All roads have reopened, but there may still be residual traffic.

See a map of where the shooting happened below:

WTOP’s Matt Delaney and Liz Anderson and The Associated Press contributed to this report.

CNN+ collapse: Insiders, critics doubted service all along as Brian Stelter ponders if it was ‘success’ – New York Post

CNN+ collapse: Insiders, critics doubted service all along as Brian Stelter ponders if it was ‘success’ - New York Post