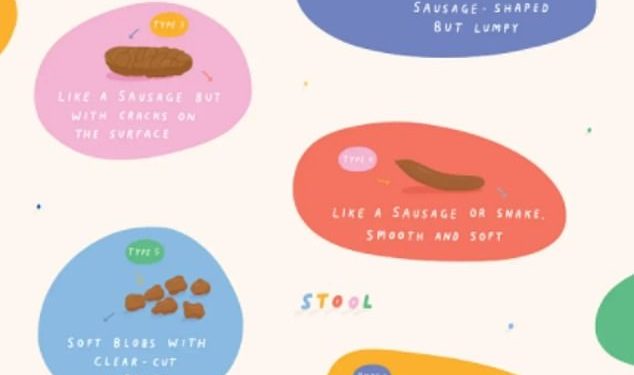 By Health Reporter For Mailonline

Artists have created new charts that lift the lid on what your poo says about your gut health.

They detail why having ‘rabbit droppings’ can be a sign of constipation and how an upset tummy may cause ‘fluffy’ poo with ‘ragged edges’.

The three new graphics are a modern take on the Bristol Stool Chart which has been used by NHS medics since the 1990s to assess faeces.

Another presents the seven different categories of stools as abstract pieces of art, from lumpy to solid and watery, and the third is an illustrative take on the original.

People whose stools fall into categories three and four likely have good gut health, while types one and two suggest constipation and five to seven signal diarrhoea.

They hope turning the Bristol Stool Chart into the ‘Beautiful Stool Chart’ will raise awareness of gut issues, which are often revealed in the shape of your poos. 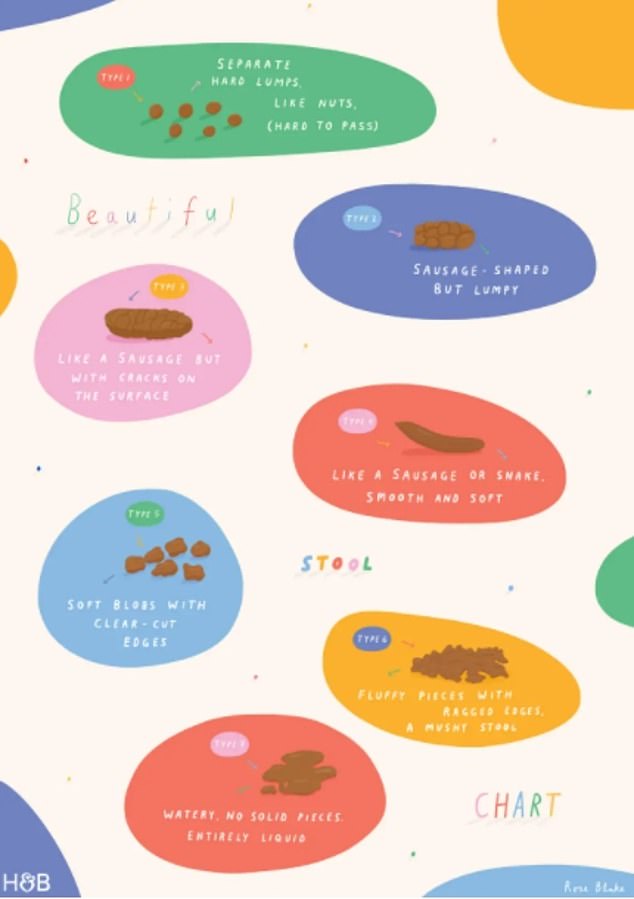 British artist Rose Blake, the daughter of pop artist Sir Peter Blake, designed this ‘Beautiful Stool Chart’, which is an illustrative take on the original version designed 25 years ago 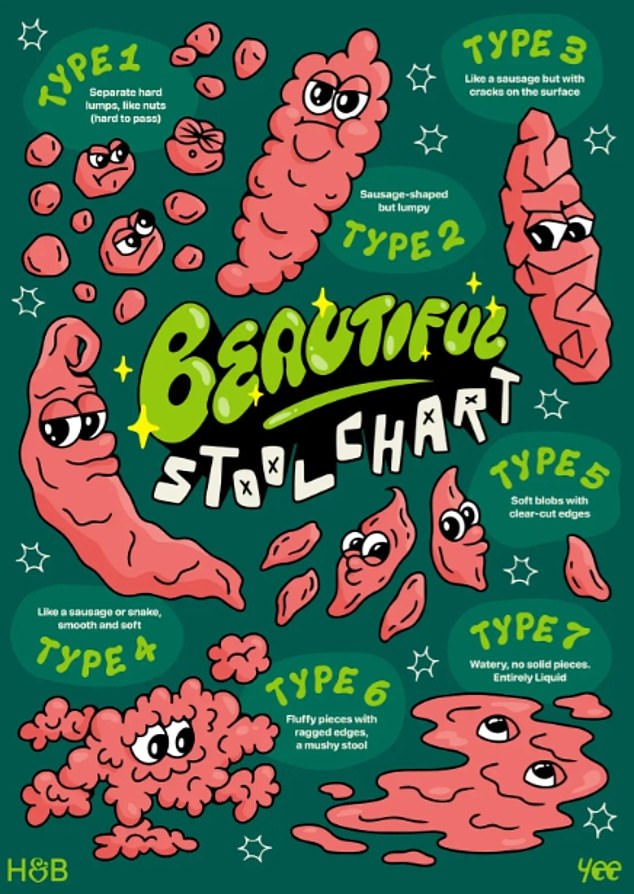 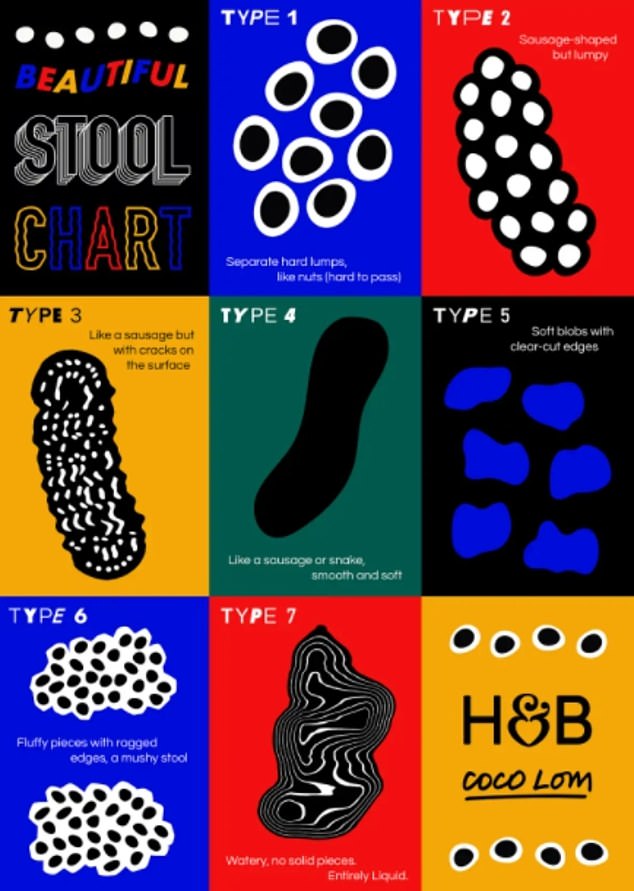 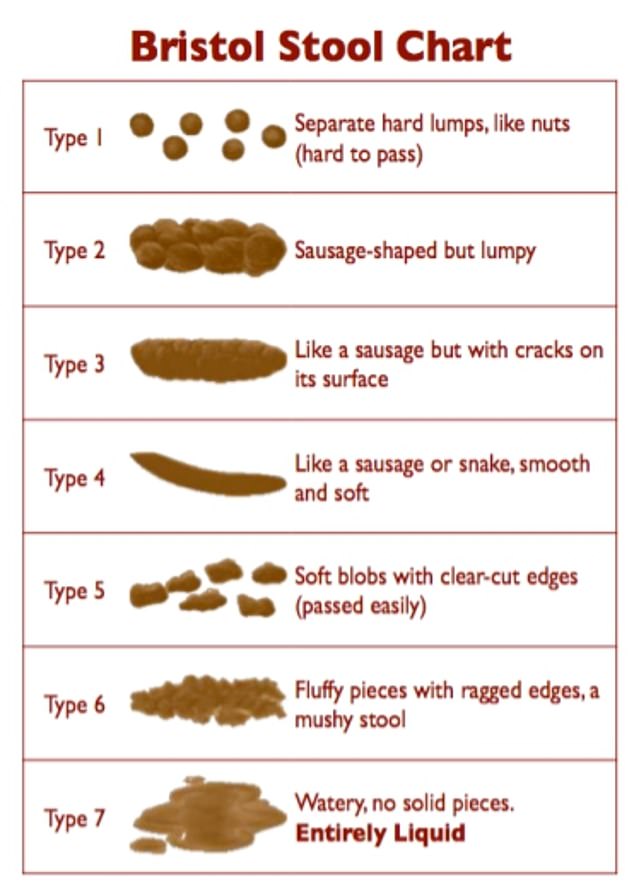 HOW COMMON ARE GUT PROBLEMS?

Around four in 10 Britons suffer from digestive issues, according to the NHS.

But gut complaints, such as diarrhoea and bloating, can usually be treated with lifestyle changes and over-the-counter medicines.

Dr Anton Emmanuel, consultant gastroenterologist at University College Hospital in London, explains: ‘Most digestive problems are to do with lifestyle, the foods we’ve eaten, or stress.

‘Which means that taking steps to change your lifestyle can help, and often prevent, many of these problems.’

Digestive symptoms are usually harmless and often settle down by themselves.

But people are told to visit their GP if they have been taking a pharmacy remedy for two weeks and not seen any improvement.

And anyone suffering from serious digestive issues, should see their doctor straight away.

The chart makeover, commissioned by health and wellness retailer Holland & Barrett, comes after a survey revealed 72 per cent of Britons have suffered from digestive problems, such heartburn, constipation or feeling bloated.

But 44 per cent of people do nothing about it, according to a poll by the retailer of 1,000 adults across the UK.

Meanwhile, 78 per cent of UK adults say they don’t know what the gut does, how it works or the signals of digestive issues — bloating or gas, heartburn, indigestion, diarrhoea and constipation.

Three in five people said they would be too embarrassed to talk to family and friends about their guy problems.

People who take action to improve their gut health say it supports their physical and mental health, immunity and to tackle stress, anxiety, low moods or depression.

Dr Subashini M, director of science, health and wellness at Holland & Barrett, said: ‘Whilst talking about poo is a taboo subject for many people, we’re hoping that making it beautiful will prompt people to think about their gut health, identify if they have any issues, and consider how best to manage them.

‘The gut plays a part in everything from your mental health to getting a good night’s rest.

‘So it really is important to seek help and support if you’re not regularly doing healthy number twos.’

Ms Blake’s Beautiful Stool Chart will be displayed in Holland & Barrett stores across the UK in February, while the other two charts can be seen online.

Ms Lom said: ‘To be asked to create an artwork highlighting gut health was certainly an unusual project for me, but the issue is not so unusual for many people in their daily lives.

‘I hope my Beautiful Stool Chart will encourage people to think about their gut and seek advice if they need to.’