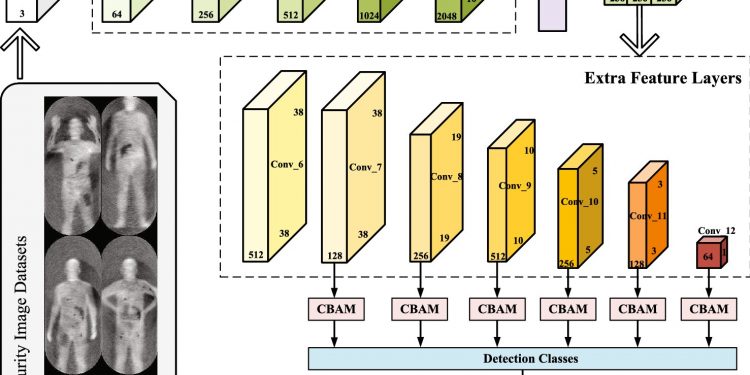 
With the strengthening of global anti-terrorist measures, it is increasingly important to conduct security checks in public places to detect concealed objects carried on the human body.

Previous studies have proved that deep learning is helpful for detecting concealed objects in passive terahertz (THz) images. However, real-time labeling with superior accuracy and performance is still challenging.

A research team led by Prof. Fang Guangyou from the Aerospace Information Research Institute (AIR), Chinese Academy of Sciences (CAS), has trained and tested a promising detector based on deep residual networks using human image data collected by passive terahertz devices. The proposed method can be used for accurate and real-time detection of hidden objects in terahertz images.

The study was published in Scientific Reports on July 15.

The research team replaced the backbone network of the Single Shot MultiBox Detector (SSD) algorithm with a more representative residual network to reduce the difficulty of network training. Aiming at the problems of repeated detection and missed detection of small targets, a feature fusion-based terahertz image target detection algorithm was proposed.

Furthermore, they introduced a hybrid attention mechanism in SSD to improve the algorithm’s ability to acquire object details and location information.

The research team also compared the proposed model with other mainstream detection methods on the terahertz human security image dataset. The results showed that the proposed method achieves improved detection accuracy in comparison with the original SSD algorithm when the speed is only slightly reduced.

Provided by
Chinese Academy of Sciences