Delay Repay: When can I get a full refund on a train ticket? 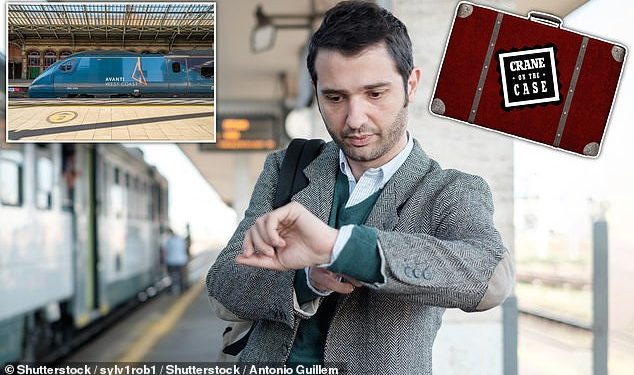 
I booked a weekend away in Manchester in December, and was set to travel by train from London Euston to Manchester Piccadilly.

I booked two single tickets, and the outbound train was an Avanti West Coast service scheduled to leave at 10:19am on the Saturday.

When I arrived at Euston on the day, I saw that my train had been cancelled.

I was issued with a replacement ticket for the next available train, which was the 11:19am service. 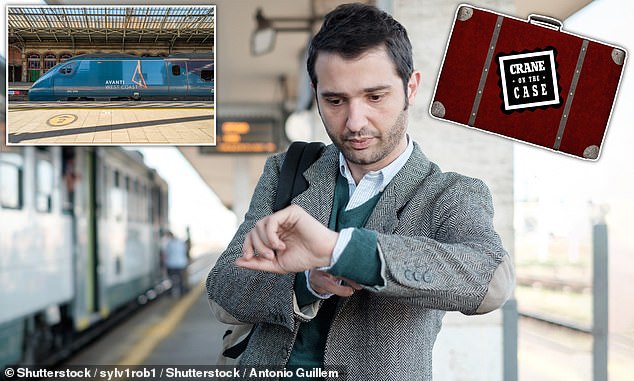 Bad timing: This reader thought he would be refunded for his full train ticket by operator Avanti West Coast, as the service he travelled on was an hour later than his cancelled one (picture posed by model)

When I was waiting to board the return train, I asked the Avanti West Coast staff at the gate about my ticket the day before and was directed to a manager.

She apologised for the cancellation and told me I could get the ticket refunded via the Delay Repay scheme.

She told me that the refund should be 100 per cent of the ticket price, as it was one hour delayed.

After getting home, I filled out the Delay Repay form and requested a refund.

The website clearly notes that for single tickets, a delay of up to 59 minutes is eligible for a 50 per cent refund, while a delay of 60 minutes or more will result in 100 per cent of the ticket value being paid back.

I was surprised, then, to be informed some time later that the Delay Repay compensation was approved at 50 per cent, and would be processed into my bank account.

I appealed the 50 per cent refund and Avanti West Coast has declined it, sticking with its calculation that the train one hour later was between 30 and 59 minutes late.

CRANE ON THE CASE

Our weekly column sees This is Money consumer expert Helen Crane tackle reader problems and shine the light on companies doing both good and bad.

Helen Crane of This is Money replies: You were looking forward to a pre-Christmas city break, but your plans were derailed slightly when the train you booked was cancelled.

On the way home, you were told you would be able to get a refund for the price of the outbound journey, which was £45.70.

With taking the train not cheap, you thought a bit of extra cash in your pocket would be just the ticket.

But Avanti West Coast’s refund policy has got you stumped. Your train was delayed by an hour, so why is the full 100 per cent refund not being offered?

I contacted the train operator and asked it to explain.

Avanti said that, though you waited a full hour for the next train, your journey was only delayed by 45 minutes.

This, it said, was because the 11:19 train you boarded was slightly quicker than the 10:19 service. 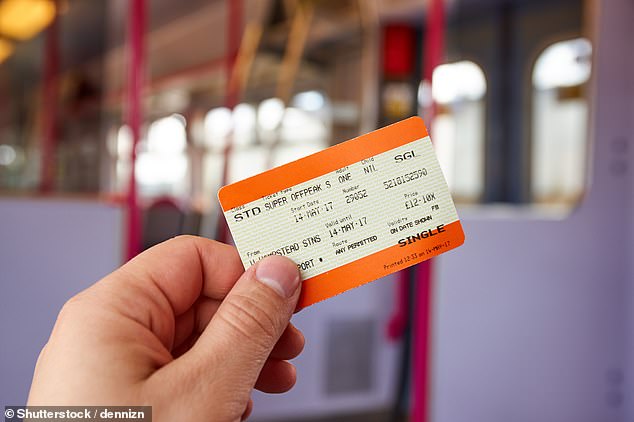 Travel trouble: The reader attempted to get a full refund using Delay Repay, but was only eligible for half of that because he arrived at his destination 45 minutes later than planned

A spokesperson for Avanti West Coast said: ‘We’ve checked this claim, and his Delay Repay compensation (50 per cent of his fare) is correct. Delay Repay is based on how delayed a passenger is in arriving at their destination.

‘As outlined when he applied for compensation, the customer was entitled to 50 per cent of his fare as compensation as he was 45 minutes late because of the cancellation of the 10:19.

‘He was unfortunately wrongly advised on the day about his claim for full compensation, and we apologise for this.’

Its Delay Repay application form refers only to the ‘length of delay,’ without stating that this is based on the time of arrival, not departure.

As you have since pointed out to me: ‘Any normal person sees the departure board and will see the scheduled departure and new departure time of the replacement train to determine the amount of time is lost’.

‘Even though the second train I was on arrived less than an hour after the first train’s scheduled arrival time, I still had to waste an hour at Euston.’

Unfortunately rules are rules, no matter how opaque they are – so you won’t be getting the full ticket price refunded.

Customers hoping to use Delay Repay in future would be well advised to mind the gap between the compensation they think they are entitled to, and what they actually get. 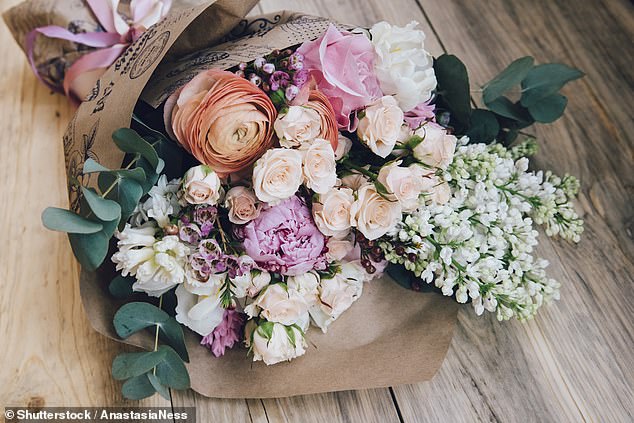 Thanks a bunch: Reader Jill was happy with the service she received from Bloom & Wild when a flower delivery for her friend’s birthday got delayed

Every week, I look at the companies who have fallen short when it comes to customer service, and those who have gone above and beyond.

Hit: Reader Jill got in touch to tell us about the blooming marvellous service she received from online florist, Bloom & Wild.

She said: ‘I ordered postal flowers from Bloom & Wild for a friend’s birthday, to be delivered on 31 December.

‘They do say there is no guarantee of delivery on the preferred date, but I had never had problems before.

‘Unfortunately they didn’t arrive on her birthday, and I hadn’t realised when ordering that, due to bank holidays and weekends, there was a four-day gap before the next postal delivery.

‘I contacted Bloom & Wild on several occasions and each time they replied quickly, and kept in contact to see how the flowers were when they arrived.

‘Sadly they were not at their best. They replaced the flowers and also gave me a £10 discount on a future order which, considering it was partly my fault, was above what I expected.’

We’re glad to hear that Bloom & Wild rose to the occasion. 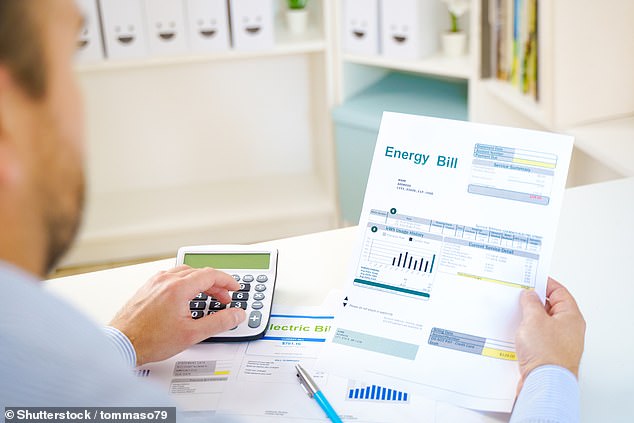 Miss: The crisis in the energy market is causing havoc for customers. With more than 40 suppliers having gone down to date, those who have problems with their bills often don’t know where to turn.

Reader Wayne has been especially unlucky. He decided to switch suppliers from EDF Energy to Euro back in September 2021, but his transfer completed on the very day that the latter firm went under.

His account was transferred to Octopus Energywhich took over Avro – meaning he had effectively had three energy suppliers in as many days.

He had an issue regarding a mis-charging of more than £600, and none of the suppliers were particularly energetic when it came to getting this sorted.

When he closed his account with EDF, the final bill said he owed the company £687 – but based on his calculations he owed them just £24.

EDF accepted its mistake and said it would instead base his final bill on new meter reading he took that day of 56582, and send this information on to Avro. So far, so good.

Where the problem started was that, as it entered administration on the day of Wayne’s transfer, Avro was unable to accept EDF’s final meter reading – something that needs to happen before the final bill is issued.

To add to the confusion, Wayne says Avro recorded an opening meter reading on the day it went into administration, which was again not correct.

This left Wayne with a £662 debt to EDF, which the supplier had admitted was an error – but both were relying on a now-insolvent energy firm to resolve the issue.

Wayne tried and failed to contact Avro to get this corrected for some time, including via the customer service line of Octopus which had since taken on his account.

This is Money contacted Octopus to ask them to resolve the issue, and thankfully the company did the right thing and got it sorted promptly.

Wayne received a call from the company’s head of operations, telling him it had issued a new final bill from Avro, which would accept EDF’s final £24 bill, clearing his £662 debt with EDF.

He was happy with this solution and has also been given a £30 credit from Octopus to make up for the Avro error and cover the cost of his final bill with EDF.

He can now stop wasting his energy on getting this fixed.

The latest on the Ukraine-Russia crisis: Live Updates – cnn.com

The latest on the Ukraine-Russia crisis: Live Updates - cnn.com