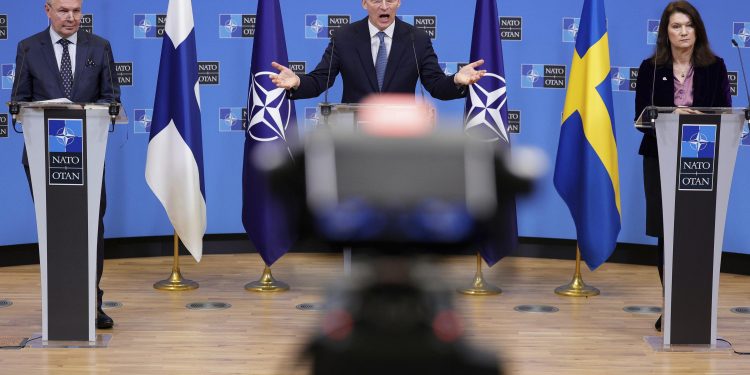 ANKARA, Turkey (AP) — Senior officials from Sweden and Finland held some five hours of talks with Turkish counterparts in Ankara on Wednesday in an effort to overcome Turkey’s strong objections to the Nordic nations’ bids to join NATO.

Sweden and Finland submitted their written applications to join NATO last week. The move represents one of the biggest geopolitical ramifications of Russia’s war in Ukraine and could rewrite Europe’s security map.

Turkey has said it opposes the countries’ membership in the Western military alliance, citing grievances with Sweden’s — and a to a lesser extent Finland’s — perceived support of the Kurdistan Workers’ Party, or PKK, and other entities that Turkey views as security threats.

The PKK, which is listed as a terror organization by several of Turkey’s allies, has waged a decades-long insurgency against Turkey, a conflict that has cost the lives of tens of thousands people.

Turkey’s objections have dampened Stockholm’s and Helsinki’s hopes for joining NATO quickly amid Russia’s invasion of Ukraine and put the trans-Atlantic alliance’s credibility at stake. All 30 NATO members must agree on admitting new members.

Swedish Prime Minister Magdalena Andersson said following a meeting with European Council President Charles Michel in Stockholm that her country wanted to “clarify” claims that have been floating around during discussions with Turkey.

“We do not send money or weapons to terrorist organizations,” Andersson said.

During a news conference with the Estonian prime minister later Wednesday, Andersson said that “in these times, it is important to strengthen our security.”

She said Sweden has “a constructive dialogue” with Turkey and that Stockholm was “eager to sort out issues and misunderstandings and questions.”

Michel, who is scheduled to head to Helsinki from Stockholm, said it was “a pivotal moment for Sweden” and “we fully support your choices.”

Turkey this week listed five “concrete assurances” it was demanding from Sweden, including what it said was “termination of political support for terrorism,” an “elimination of the source of terrorism financing,” and the “cessation of arms support” to the banned PKK and a Syrian Kurdish militia group affiliated with it.

The demands also called for the lifting of arms sanctions against Turkey and global cooperation against terrorism.

Turkey said that it has requested the extradition of Kurdish militants and other suspects since 2017 but hasn’t received a positive response from Stockholm. The Turkish government claimed Sweden had decided to provide $376 million to support the Kurdish militants in 2023 and that it had provided them with military equipment, including anti-tank weapons and drones.

Finland has received nine extradition requests from Turkey in a recent period covering over three years, Finnish news agency STT said Wednesday, citing data from the Finnish justice ministry. Two people were extradited while six of the requests were rejected. A decision was pending regarding one other case.

Sweden has denied providing financial assistance or military support to Kurdish groups or entities in Syria.

“Cooperation in northeastern Syria is carried out primarily through the United Nations and international organizations,” she said. “Sweden doesn’t provide targeted support to Syrian Kurds or to the political or military structures in northeastern Syria, but the population in these areas is, of course, taking part in these aid projects.”

Speaking Tuesday before a meeting of the Council of the Baltic Sea States, German Foreign Minister Annalena Baerbock said Russia had left Sweden and Finland “no choice” but to join NATO.

She said Germany would support the two countries’ membership, calling it “a real gain” for the military alliance.

Jan M. Olsen in Copenhagen, Denmark, and Jari Tanner in Helsinki contributed to this report.