The UK’s ambitions of attracting more tech companies to list in London were dealt a severe blow when Deliveroo’s shares plunged 26 per cent in the company’s debut on Wednesday.

Shares in the food delivery app lost as much as 30 per cent within the first min­utes of trading, wiping more than £2bn off the company’s value in one of the sharpest drops for a big new listing in years.

By the time London markets closed, the share price had recovered slightly to 287p but was still a quarter below its opening level, giving the company a valuation of £5.2bn, according to Bloomberg.

The reaction will fuel growing doubts among large UK institutional investors about the wisdom of loosening London listing rules to attract fast-growing but lossmaking tech companies.

Deliveroo had set its opening share price at the bottom of its target range at 390p on Tuesday, citing choppy market conditions and following a backlash from some large British investors over corporate governance.

The initial public offering had given Deliveroo an opening valuation of about £7.6bn, the highest in London since resources group Glencore’s 2011 IPO, according to Dealogic data.

But the food delivery app quickly shed more than £2bn in market value in its first moments as a public company.

That draws a stark contrast with DoorDash, Deliveroo’s closest US equivalent, whose share price jumped more than 86 per cent on its first day of trading in New York in December. However, DoorDash has lost more than a third of its value since mid-February, suggesting Deliveroo may have arrived too late to benefit from the past year’s huge rally in tech stocks.

As recently as Tuesday, Deliveroo had insisted that it had experienced “very significant demand” from investors and the deal had been covered “multiple times”, even as it moved to lower its pricing range this week.

One equity capital markets banker, who was not involved in the deal, said he was left stunned by what he called an “absolute car crash”.

“It’s completely embarrassing. I can’t remember a time this has happened before,” he said. The IPO was “disastrous” for London’s hopes to become a focus for tech listings, he added.

Deliveroo sold shares worth £1.5bn in the offering, raising gross proceeds of about £1bn for the company to invest in new growth initiatives such as its Editions network of delivery kitchens, while existing investors will cash in to the tune of £500m.

Yet retail investors, who had been allocated £50m worth of stock in the IPO that was marketed within the Deliveroo app, will be unable to trade until next Wednesday, when unconditional dealings begin.

At a time when other European companies have sought to go public in New York or Amsterdam, Deliveroo’s IPO has been seen as a test case for a Silicon Valley-style tech company listing in London. While online retailer The Hut Group has shown strong gains since September’s IPO raised £1.9bn, internet ratings service Trustpilot has struggled to gain momentum after its debut last week.

Deliveroo, founded in 2013, lost £224m last year but revenues jumped 54 per cent, as takeaway orders were boosted by pandemic lockdowns across Europe.

“I am very proud that Deliveroo is going public in London — our home,” said chief executive Will Shu. “Our aim is to build the definitive online food company and we’re very excited about the future ahead.” 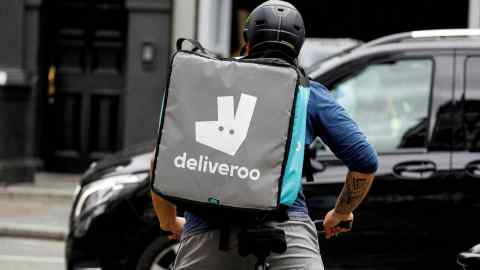 Shu holds outsized voting power in the stock thanks to a dual-class share structure, which is common among Silicon Valley companies such as Google and Facebook but rare among UK listings. Under current stock market rules, the arrangement prevents Deliveroo from entering the FTSE 100, despite having the market capitalisation to qualify.

The government-backed Lord Hill review set out plans to make London listings more attractive, including by relaxing rules on dual-class share structures. But Alex Chesterman, founder of Cazoo, which chose to float in New York this week instead of the UK capital, told the Financial Times that London investors did not have the “psyche” to back companies investing for the future.

Investors at several large UK asset managers, including the fund management arms of Legal & General, Aviva and Aberdeen Standard, decided not to participate in Deliveroo’s IPO, citing a combination of regulatory risk and corporate governance concerns, particularly the dual-class structure.

Amazon, Deliveroo’s largest investor, sold shares worth about £91m in the IPO, while Shu also cashed in about £26m.

Early investors Index Ventures, DST Global, Accel, Greenoaks, Bridgepoint and General Catalyst sold about 10 per cent of their stakes in the IPO. Two of Deliveroo’s larger private backers, T Rowe Price and Fidelity, have chosen not to sell yet.

Deliveroo’s pre-IPO investors are now prevented from selling further shares for up to 180 days, under lock-up rules.

Some 70,000 people participated in Deliveroo’s £50m share offer to customers, with each limited to investing £1,000. One told the FT they were “feeling a bit sick” after Wednesday’s initial performance.

Goldman Sachs and JPMorgan are Deliveroo’s joint global co-ordinators, while Bank of America, Citigroup, Jefferies and Numis acted as bookrunners.