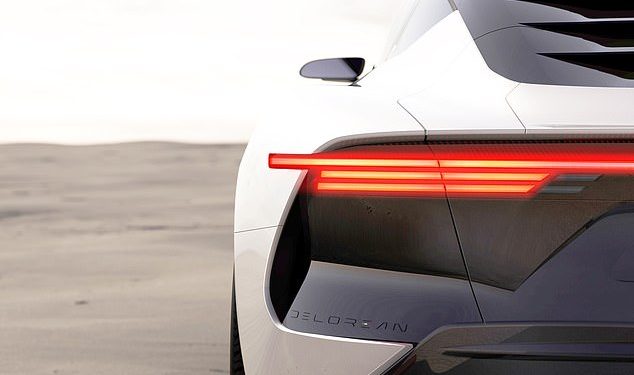 
Owners of the DeLorean brand says it will reveal an all-new electric sports car in August, with the name returning to the market more than 40 years after the DMC-12 arrived and became a cinema superstar and later a cult classic.

The electric performance model will be unveiled in California on 18 August ahead of the exclusive Pebble Beach Concours d’Elegance motor show, where it will appear on display.

The unveiling date has been announced this week by Texas-based owners along with a new teaser image, confirming that it will be a brand new design rather than an electrified version of the 1981 car that starred in the Back to the Future film franchise. 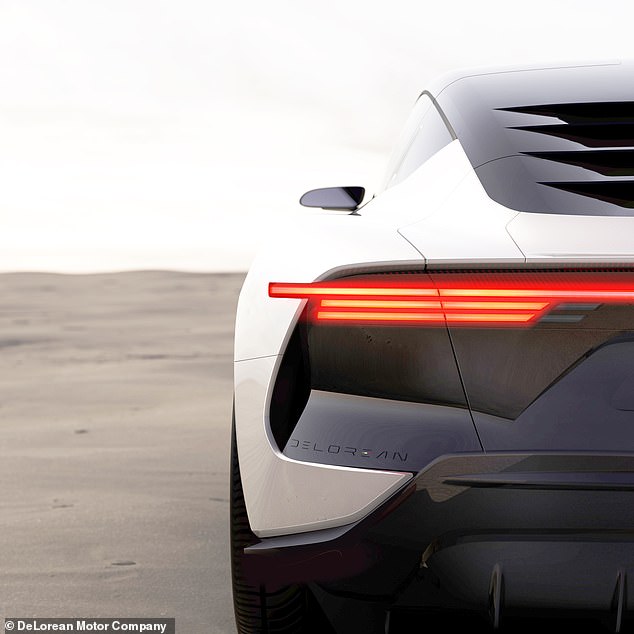 DeLorean confirms comeback: Owners of the DeLorean Motor Company said they will reveal an all-new electric sportscar on 18 August in California – and released this teaser image of the motor

DeLorean Motor Company, which has owned the rights to the DMC name since 1995, said back in February that it will spark a resurgence of the marque in 2022.

In a short video shared on the brand’s official social media channels, it showed a darkly-lit and tightly-cropped clip of a gullwing-door model in the shape of the original DMC it claimed will hit he market as a luxury electric vehicle.

Now that a date for its official unveiling has been set in stone, bosses have shared a new image that provides a first-time glimpse of what the back of the vehicle will look like.

It reveals a dramatic sloping roof line at the rear, incorporating slats across the back window in a nod to the original DMC-12.

The bodywork is a tone of silver to mimic that of the steel-bodied eighties sports car, though its panels will likely be a lightweight composite this time around, importantly to offset the weight of the batteries.

A thin LED bar looks to span the width of the rear end with a pair of stacked shorter clusters that will likely incorporate the brake lights and indicators.

This mirrors the illuminating light bar across the front of the vehicle, which dips into a ‘V’ shape in the centre of the grille – as shown in the previous teaser image from February.

We also know that the car shares the same windscreen shape and long bonnet design with the iconic classic. 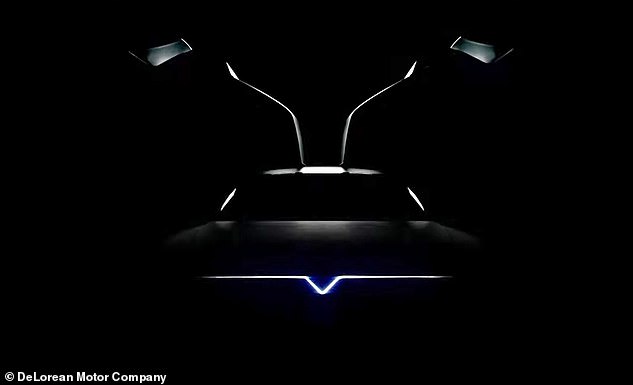 DeLorean Motor Company, which has owned the rights to the DMC name since 1995, said back in February that it will spark a resurgence for the marque in 2022

The new snap shows a vehicle with an aggressive stance, with the back dominated by muscular haunches over the rear wheel arches and a large diffuser down low.

There are panel gaps in the rear deck suggesting an active spoiler could emerge and there is a ‘DeLorean’ nameplate etched into the section below the left tail light.

Further details about the car remain thin on the ground, though we do know it is being co-developed with Italdesign – the styling house that penned the original DMC-12.

Speaking on the Italdesign collaboration, DeLorean’s chief marketing officer Troy Beetz said: ‘We are very excited that the next evolution of the DeLorean brand will be represented by our storied partnership with Italdesign and a vehicle that will showcase our vision for the future.’

February social media posts suggest its name will be the DeLorean ‘EVolved’, though there is still no confirmation that this will be used for the production version – and there is no information as yet about the electric powertrain.

The DeLorean was made iconic by the 1985 hit sci-fi film, Back to the Future, starring Michael J Fox as Marty McFly (right) and Christopher Lloyd as Doc (left) 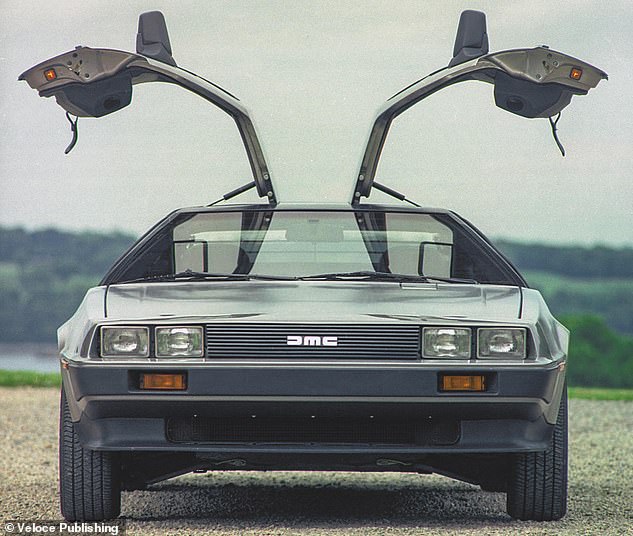 The new car will have a similar silhouette to the DMC-12 original, and feature gullwing doors 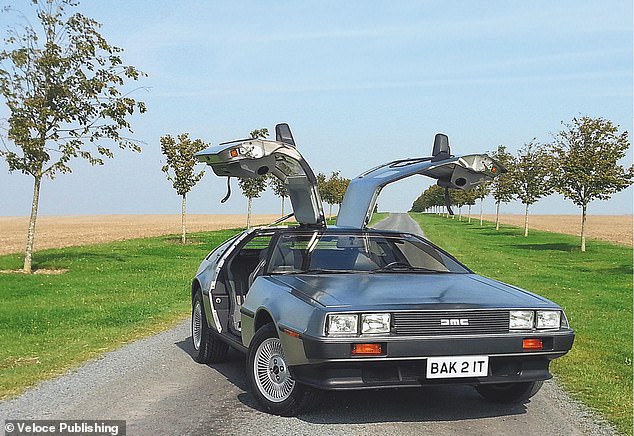 The use of batteries and electric motors should solve one of the criticisms of the original car, in that the 2.85-litre V6 engine was too underpowered for its bulk.

This resulted in a 0 to 60mph time of 10 seconds, which failed to match its sporting looks.

And it’s likely to have more than the 1.21-gigawatts of power ‘Doc’ famously claimed is needed to travel through time in the famous Back to the Future quote.

Since then, the company, now based in Texas, has specialised in spare parts, restorations and other services dedicated to the 1981 classic, which was in production for less than two years with 9,000 cars built before the brand went bankrupt in October 1982.

Just last year, Torino-based Italian design house Italdesign marked the 40th anniversary of the DMC with the release of a similarly mysterious teaser image showing the silhouette of the 1981 two-door coupe, which was originally penned by its owner, Giorgetto Giugiaro. 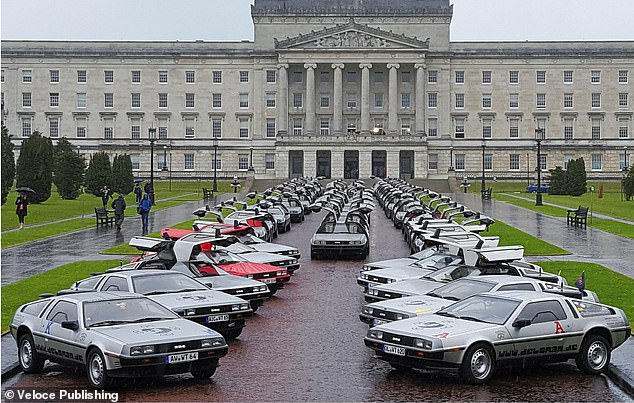 An estimated 6,500 original DMC-12s remain on the road today, which three of the Back to the Future film cars surviving 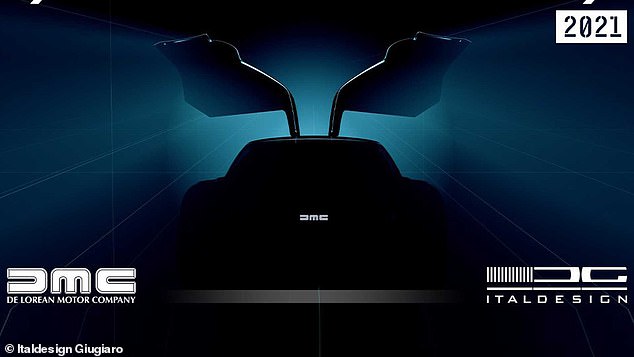 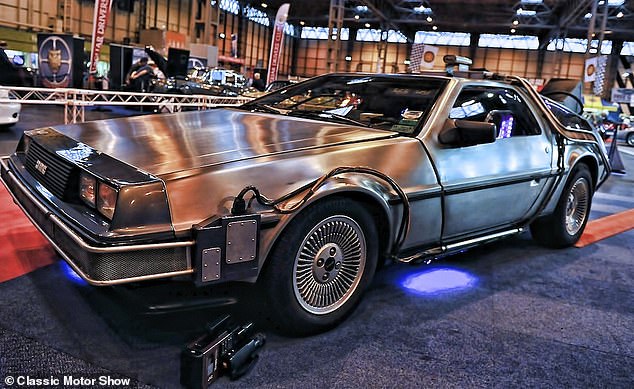 Briton Wynne has made multiple attempts to bring the car back to life in recent years, including talks in 2016 to have a low-production run of 300 ‘continuation’ cars that until now have failed to surface.

In 2011, DeLorean Motor Company also suggested the availability of 200bhp EV conversions for the cars.

Italdesign’s recent partnership with Williams Advanced Engineering – the development arm attached to the Formula One racing team – would likely give it access to the British specialist firm’s electric vehicle knowledge and platforms for a resurrection.

Williams Advanced Engineering recently won the contract to be the battery supplier for the 2022-2023 Formula E championship and has collaborated with a number of brands on EV projects in the past. 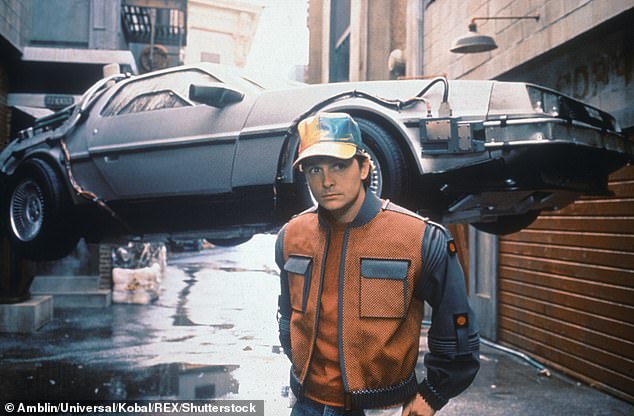 Michael J Fox pictured during filming of Back To The Future II, 1989, which also featured the DMC-12 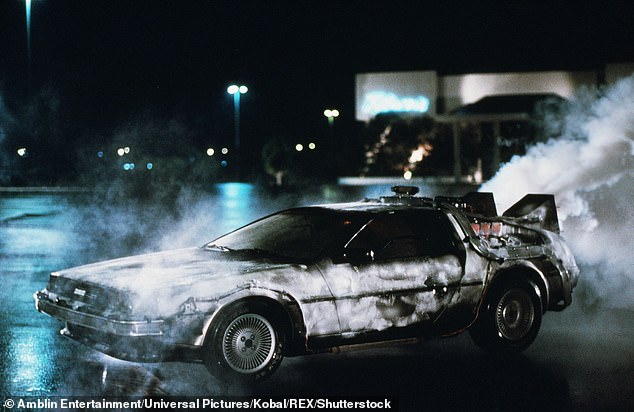 While the original DMC shot to fame on the back of the success of the Back to the Future franchise, the vehicles themselves were deemed too underpowered to compete with the sports car elite at the time 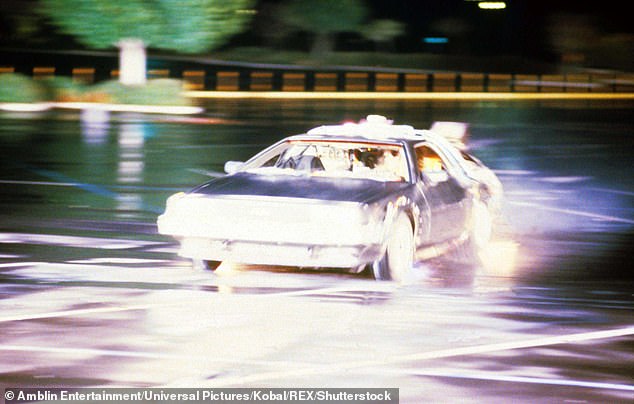 The DeLorean in the films could famously time travel when it hit speeds of 88mph. The production car had a top speed of 110mph

While the original DMC shot to fame on the back of the success of the Back to the Future franchise, the vehicles themselves were deemed too underpowered to compete with the sports car elite at the time.

Its weight and modest 130bhp six-cylinder engine combined to provide a relatively pedestrian top speed of 110mph – some 22mph faster than what was needed to achieve time travel in the films.

It was unfortunately launched as economies were slipping into a recession and was also riddled with quality issues, which became a particular annoyance to those who had paid a premium over the £16,600 list price (around £73,000 today taking into account inflation) to get their hands on the first models.

An estimated 6,500 original DMC-12s remain on the road today, which three of the Back to the Future film cars surviving.

The DeLorean was already out of production by the time it made its debut in the 1985 cult classic, though Robert Zemeckis’ sci-fi hit featuring Michael J Fox as Marty McFly and Christopher Lloyd as Dr Emmett ‘Doc’ Brown made it instantly iconic among movie fans.

Its big-screen fame means original cars today are valued between £20,000 and £50,000, depending on mileage and condition.

In December 2011, one of the remaining film cars – a heavily-modified example used in Back to the Future III – sold for a staggering $541,200 at a US auction. 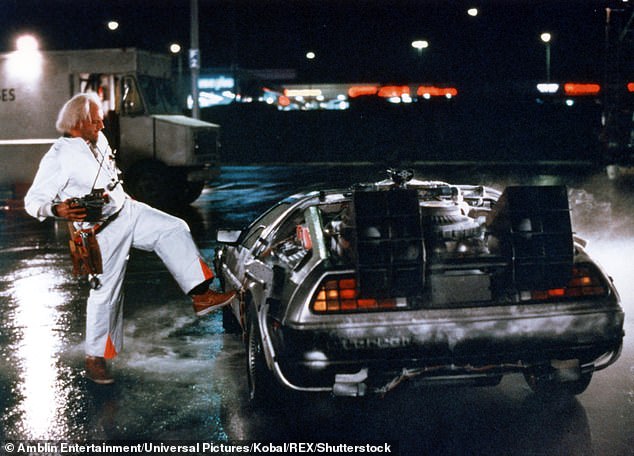 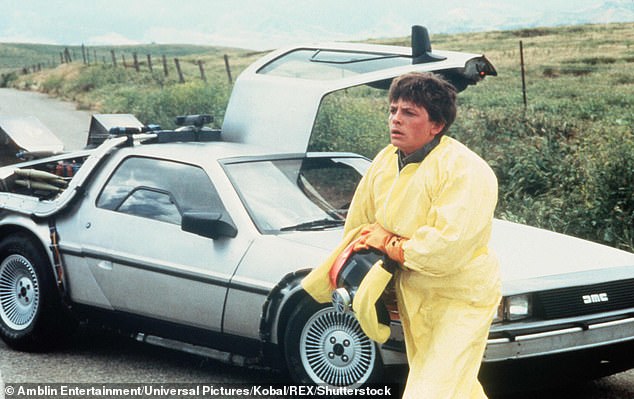 Current owners, DeLorean Motor Company, bought the rights to the Belfast company’s name in 1995 via British engineer Stephen Wynne. It has since specialised in spare parts for the original. Pictured: A scene from the 1985 Back to the Future film