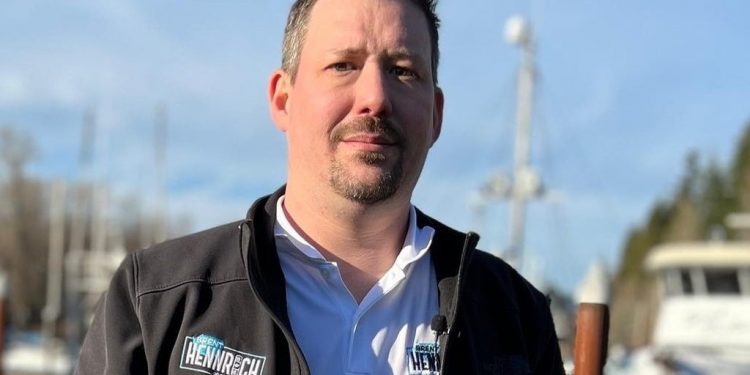 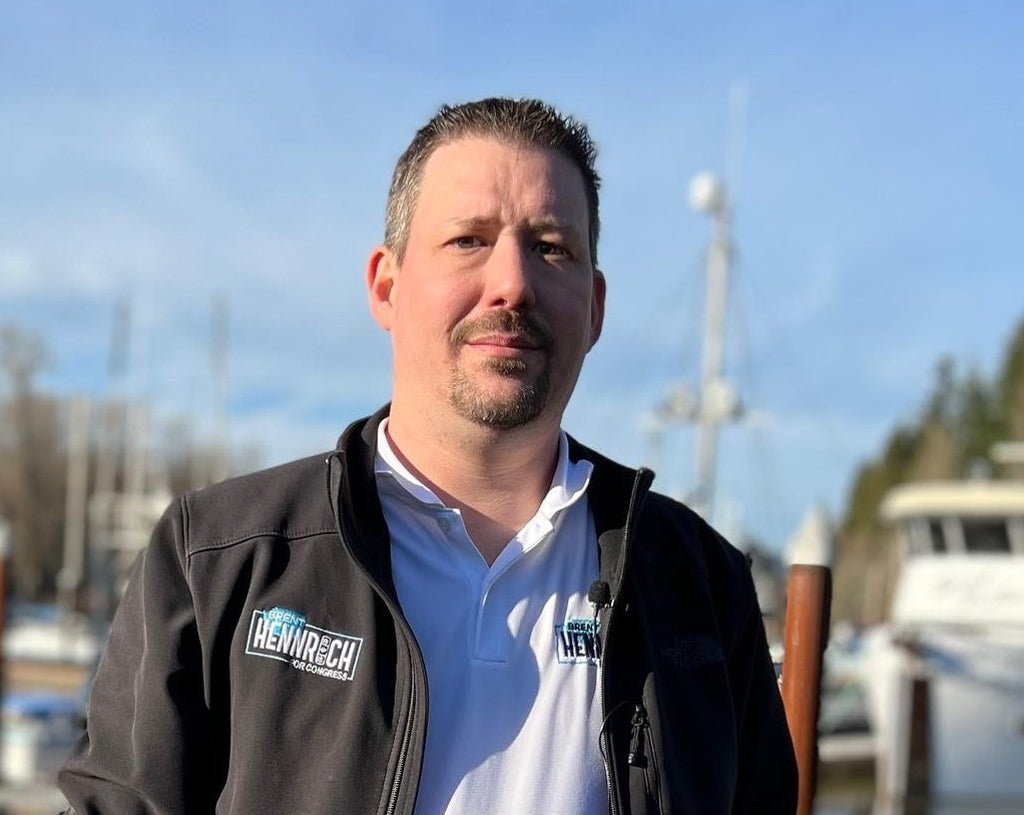 Brent Hennrich, the Democrat looking to flip one of the most closely watched election contests of the year, has assumed first position in the polls, after Donald Trump’s intervention split the field of Republicans.

Washington state’s 3rd Congressional District is currently held by Republican Jaime Herrera Beutler, who was first elected in 2010, and is seeking a sixth term.

Yet Beutler was one of the just 10 Republican members of the House who voted to impeach Trump after the storming of the US Capitol. A furious Trump has vowed to back challengers to all of those who voted against him and he has already endorsed several candidates.

In Washington’s 3rd District, the former president has backed former Green Beret Joe Kent, a veteran of America’s post-9/11 wars and whose wife, a Naval cryptographer, was killed by Isis.

One of the impacts of the former president’s direct engagement in the race and the prospect he may come to the Pacific Northwest to campaign for Kent, is that it has turned the contest into a means by which to measure Trump’s power and influence among voters, even though he is no longer president.

Another consequence of Trump’s actions in splitting up the Republican field has been to open the way for Hennrich, 42, a father of three who used to work as a manager to Dolby Cinemas, to ascend to first place in the polls.

While to date he has far less name recognition and less in the campaign coffers than Herrera Beutler or Kent, the most recent polling by Trafalgar Group puts him in his first place with 33 per cent, ahead of Kent at 26 per cent, Herrera Beutler at 22 per cent, and Heidi St John, a conservative author of religious books, at 12 per cent.

Hennrich tells The Independent he was both delighted and a little daunted when an earlier poll had put him in second place to Kent, but ahead of Herrera Beutler.

“It cemented my drive to say, we’re in this, we’re in this for the right reasons and resonating, and we are going to do this,” he says.

He says that also presents him with a sense of responsibility after Democrats were disappointed not to flip the seat in 2020, when college professor Carolyn Long failed for the second time in succession not to beat Herrera Beutler. For Democrats, the sense of disappointment was greater given the Republican incumbent actually increased the scale of her victory.

“I have to perform. I have to keep putting in the work every day. And I do 16 hours a day. Every day,” he says.

Hennrich acknowledges the fact he has never held public office before could be both a problem and a benefit.

“I see it as a blessing and a curse. When we look at getting people elected, we want to look, oftentimes, how they’ve voted, or how they’ve reacted to different issues, whether it’s city council, county council, state legislature, and so they have a voting history, that that can be presented to the voters,” he says.

“And that can be, like any statistic, semi-manipulated or twisted.”

On the other hand, by not having such a record, people cannot accuse him of shifting his position on key issues when it might be politically convenient.

“I say my biggest piece of baggage in this run, is that I don’t have any baggage,” he adds.

One of the most formative experiences for Hennrich, who was born and grew up in southwestern Washington, was the death of a child, Addison, who died after his wife, Amber, suffered a placental abruption when she was 20-months pregnant.

The couple took the decision to induce the child in order to save his wife’s life, and the little girl died cradled in their arms that same day. He says the experience not only made him an even more fierce defender of reproductive choice, but also fueled a desire to help others.

Hennrich is a champion of Joe Biden’s infrastructure spending and Covid-relief spending, and believes that helping the nation move towards green energy can provide well-paying jobs, in his district and across the country.

Hennrich says he believes Herrera Beutler did the correct thing in voting to impeach Trump. Yet, he dismisses suggestions that she ought to be supported for having done so.

“I don’t think that one vote – that is the bare minimum to preserve and protect the constitution of the United States – necessarily makes her any more representative of our area,” he says. “It’s kind of like, the lowest hanging fruit.”

Hennrich claims Herrera Beutler rarely meets with constituents and is out of touch with the community. (Her office did not respond to inquiries from The Independent.)

“I don’t believe she’s accessible,” he says. “Her voting record is nowhere near in line with what I believe the values, morals and ethics of our area are. And so just because she voted for impeachment, it doesn’t change much.”

Hennrich claims Kent is an hardline, America-first nationalist, who will be seen as too extreme by many in the district.

Yet, both credit each other for their enthusiastic campaigning and willingness to engage with voters. As frontrunners, the two have debated each other on The Lars Larson Showa conservative talk radio progamme based in Vancouver, Washington.

This week, the two sparred over immigration, energy independence, and whether the government had the power to mandate people to get vaccinated. On the last point, Hennrich was a firm “yes”, while Kent was a definite “no”.

Larson, who made clear he supported Kent and felt Herrera Beutler was a “Republican in name only”, or RINO, asked Hennrich whether he supported the president’s decision to allow up to 100,000 short-term refugees from Ukraine into the country.

“Yes, I do believe that we should welcome 100,000 refugees and quite possibly many more refugees,” he said.

“All the statements I’ve seen so far, is that this is short-term refugee status that they’re seeking. This is women and children. This is families that want to get back to their homes and sons and fathers that are still in Ukraine.”

He added: “These people need refuge now in order to remain safe.”

Kent, who has supported Trump’s call to build a wall on the southern border and who has said he supports sending troops to help border agents, has opposed the US’ support for Ukraine, saying it is has nothing to do with the nation’s national security interest and that Americans should not be fighting there or being asked to supply its military

Kent, who says he would push for Biden’s impeachment if he were in Congress, said he also opposed permitting the refugees to enter as they would not return to Ukraine.

“Nobody ever leaves America,” he said. No, we shouldn’t be taking any of these refugees. They can stay there in the region. Poland should be committed. We can support the Polish government and welcoming in those refugees temporarily, but we should not be taking any refugees, period.”

Hennrich appears to relish the increased media and public attention the race is going to get as the August primary gets closer.

“Right now, this is a tier-three race, if not a tier-four race, because no one knows what’s going to happen here until the votes are cast in August,” he says.

He says if current polling is correct, and he and Kent go into the general election,  “this will be a top-tier race and discussed everywhere and everything will change”.

Woman’s ex demands cash after split despite not paying bills

Woman's ex demands cash after split despite not paying bills