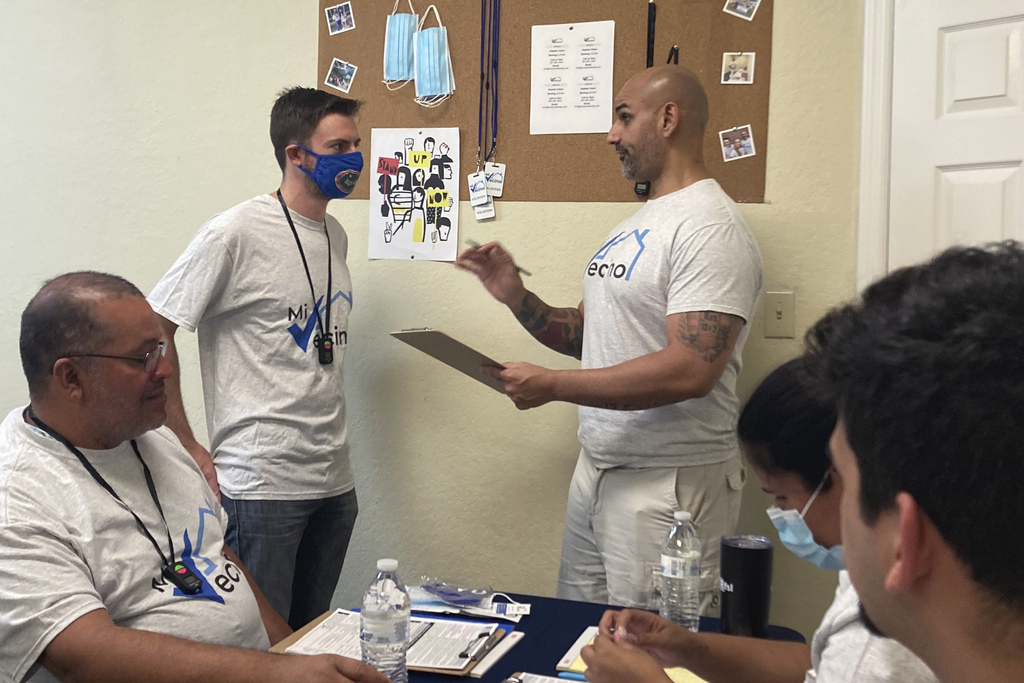 By Will Weissert | Associated Press

KISSIMMEE, Fla. — On a sweaty recent Thursday afternoon, Alex Berrios is instructing his team on how to get people to register to vote. Extend your hand, he says; it makes folks more likely to stop. Smile a lot, that works, too. But immediately take no for an answer so you don’t seem too pushy.

Berrios, co-founder of a new nonprofit, Mi Vecino, or “My Neighbor” has a lot riding on developing the right pitch. His group, which works out of a cramped office in the shadow of Disney World, is targeting Latino would-be voters. He was role-playing how best to approach them in front of Walgreens, amid games of dominoes at a senior center or outside El Bodegon, a supermarket chain specializing in Colombian products.

Fifteen months before the midterm elections, groups like his are mobilizing across the country — both Democrats who have enjoyed a historic Latino allegiance and Republicans emboldened by gains in 2020 — all trying to lock down the fastest growing segment of the U.S. population.

The stakes are high, particularly for Democrats who are counting on Latino votes as a vital part of a winning coalition for cycles to come. And few places are as central to that effort as Florida.

“We’re not selling cars here,” said Berrios, a onetime boxer who has “fighter” tattooed on his arm and is now vice chairman of the Palm Beach County Democratic Party. “We’re not going anywhere. We’re in the community and we’re staying.”

Even as Joe Biden flipped heavily Hispanic Arizona to Democratic to clinch the presidency last November, he underperformed with many Latino voters elsewhere. And his party lost congressional seats where Spanish is often more common than English, from Miami’s Little Havana to South Texas’ sparsely populated borderlands to the high desert north of Los Angeles.

Nationally, Biden won Latinos by a 59-38 percent margin over Donald Trump, but that was 17 percentage points lower than Hillary Clinton’s 66-28 percent margin in 2016, according to Pew Research Center data.

Republicans say they gained ground with Latinos because Democrats, with their increasingly left-leaning positions, are proving soft on issues like socialism and border security.

But Democrats say a problem for them was that they waited until just before the election to intensify outreach to Latino communities.

“It’s very transactional. Campaigns, they come and they start 30-60 days before an election, then they’re gone,” said Berrios, who left Biden’s campaign after raising concerns about lagging engagement with Hispanic voters.

Berrios says Mi Vecino is trying to change that. And the party has begun an expensive, intensive effort to reach Latinos and other voters of color long before the 2022 elections.

The Democratic Congressional Campaign Committee is investing more than $1 million on 48 organizing directors around the country designed to bolster “strategic outreach and build trust” with minority communities in midterm battleground districts, including in Florida and Texas.

Matt Barreto was the Biden campaign’s pollster in charge of Latino message and research and noted that he was only brought on last July, a few months before the election.

“We did what we could,” Barreto said.

He and other top Democratic advisers are now leading Building Back Together, a play on Biden’s “Build Back Better” post-pandemic campaign slogan, to promote the administration through television and digital advertising.

The initiative first targeted Arizona and Florida as well as two other states with sizeable and growing Latino populations, Nevada and Pennsylvania.

Barreto says the “always on” approach relentlessly communicates with Latinos and has tailored messages for those from different backgrounds, including distinct narrator accents for audiences in different parts of the country.

He pointed to recent Gallup polling putting Biden’s approval rating among Hispanics at higher than that of all voters, suggesting the campaign is working.

Others, though, are less optimistic.

“The truth is, the money, it hasn’t come as early as it needs to come,” said Giulianna Di Lauro, Florida director of the Hispanic political advocacy group Poder Latinx.

“Once these people are registering, we need to find a way to plug them in and engage them on the issues that we care about,” said Di Lauro, whose group is now leading community meetings around key issues.

Democrats say that’s especially vital along Florida’s I-4 Corridor, which runs 130 miles from Tampa to Daytona Beach and bisects theme-park dotted Orlando and Kissimmee. It’s heavily Puerto Rican but also Colombian-American and, most recently, has seen an influx of Venezuelan immigrants fleeing their country’s political and economic upheaval.

Florida’s surging population could also see the area gain a congressional seat — making it an even more important battleground.

Cecilia Gonzalez was one of Berrios’ trainees and moved to Kissimmee four years ago from Barinas, Venezuela. She said the U.S. could be on a similar path toward her homeland’s collapse, if “we don’t stop electing the wrong people and giving them too much power.”

“We’ve got to stop being a plate on the table and get a seat at the table,” Gonzalez said of Latino voters.

“Hispanics all across the country are Republicans,” said Florida Sen. Rick Scott, who heads the GOP’s campaign arm for the 2022 midterms. “If Republicans reach out to them, we’re going to win.”

Scott was governor before winning his Senate seat and advocated for Puerto Ricans leaving the island after Hurricane Maria’s devastation in 2017 to settle in Florida over objections from party officials in Washington who warned the new voters could make the state more blue. Republicans have only done better in statewide elections since.

More Latino voters aren’t always a boon to Democrats in other parts of the country, either. Abel Prado, executive director of the Democratic advocacy group Cambio Texas in the Rio Grande Valley, said selling empathic positions like expanding health care access is often tougher than simply counting on Trump’s personality and his boasting about disrupting traditional politics.

With Trump not on the 2022 ballot, many of his supporters may simply stay home, Prado said.

His organization estimates that getting voter turnout to 65% of registered Rio Grande Valley voters is a “16-20 month endeavor,” which means it should have started already — but it largely hasn’t.

“There are conversations about talking about how to start changing,” Prado said with a laugh.

Still, some conservative groups already have achieved the kind of ever-active Latino outreach campaigns Democrats envision. The Libre Initiative has offices in South Texas and around the country, including near Orlando’s airport.

Democrats “have treated Latinos, for a while now, as get out the vote targets and took them for granted, used them as props,” said Libre Initiative President Daniel Garza.

Prado said Democratic activists in Texas have begun trying to emulate some of Libre’s work through “deep canvassing,” a process that seeks to have longer, ongoing conversations with people to find out what motivates them — both politically and otherwise.

But such efforts take time and aren’t cheap — and that doesn’t delight donors looking for immediate results, Prado said: “This isn’t the stock market where you buy 500 shares of something and triple your money in three weeks.”