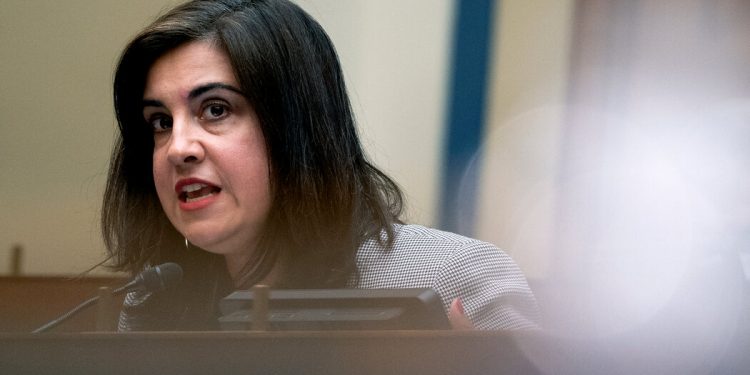 New York’s courts unveiled a slate of congressional districts on Monday that would loosen Democrats’ hold on key House seats and make it easier for Republicans to compete in this year’s midterm elections.

The map, drawn by a court-appointed special master charged with unwinding a partisan gerrymander, unquestionably offered a less favorable playing field to Democrats than the one initially adopted by the Democratic State Legislature and recently invalidated as a partisan gerrymander by the state’s top court.

The replacement would dramatically rearrange stalwart Democratic districts in Manhattan and Brooklyn, displacing some longtime incumbents and drawing others into a single district in a way that could pit them against each other or prompt one to retire.

For example, longtime Democratic representatives Jerrold Nadler and Carolyn Maloney, both powerful committee leaders in Washington, were drawn into a single district that extends across Manhattan.

The map also created a potentially awkward situation for Representative Hakeem Jeffries, the fifth-ranking House Democrat, by cutting Mr. Jeffries’ neighborhood from the district. He can still represent the district; residency requirements only mandates that Mr. Jeffries live in New York State.

The new map would also eliminate swathes of Democrat-friendly areas that the Legislature had added to Republican seats on Staten Island and Long Island, restoring them as marquee swing districts rather than Democratic pickup opportunities.

Jonathan Cervas, the court-appointed special master, said that his map would produce eight competitive House districts, compared with just three competitive seats he estimated that the Democrats’ map would have yielded.

What to Know About Redistricting

A Steuben County Supreme Court judge overseeing the case, Patrick F. McAllister, was expected to approve the congressional and additional State Senate lines by Friday. His approval would formally end a protracted and embarrassing legal saga that left the decennial redistricting process in limbo for months.

Public interest groups celebrated the outcome. They said that by striking down the Democratic maps as unconstitutional, the courts had ultimately vindicated the will of New York voters, who in 2014 adopted a constitutional amendment designed to remove partisan political motivations from the mapmaking process.

Democrats were furious, not least because of the new maps’ impact on this year’s fight for control of the House of Representatives.

Party leaders in Albany and Washington had been relying on New York to use this year’s redistricting process to make significant gains and offset those of Republicans. The map approved by the Legislature and signed into law in February would have given Democrats a clear advantage in 22 out of 26 seats.

Political analysts predicted on Monday that the new court-drawn replacements could leave Democrats battling to keep the 19 seats they currently hold in the current political environment, and allow Republicans to add to their overall House advantage nationally.

The final results promised to make New York an anomaly in a nation comprised of increasingly gerrymandered states. Numerous states used redistricting this year to reinforce the dominance of one party or the other, yet New York — one of the nation’s largest Democrat-led states — is now expected to preserve and potentially even add competitive seats.

Republicans, who have not hesitated to gerrymander in states they control, first challenged the legality of the congressional and State Senate maps in February, just after they were signed into law.

The New York State Court of Appeals, the state’s highest court, ruled in late April that the maps were unconstitutional on two grounds.

What is redistricting? It’s the redrawing of the boundaries of congressional and state legislative districts. It happens every 10 years, after the census, to reflect changes in population.

How does it work? The census dictates how many seats in Congress each state will get. Mapmakers then work to ensure that a state’s districts all have roughly the same number of residents, to ensure equal representation in the House.

Who draws the new maps? Each state has its own process. Eleven states leave the mapmaking to an outside panel. But most — 39 states — have state lawmakers draw the new maps for Congress.

If state legislators can draw their own districts, won’t they be biased? Yes. Partisan mapmakers often move district lines — subtly or egregiously — to cluster voters in a way that advances a political goal. This is called gerrymandering.

Is gerrymandering legal? Yes and no. In 2019, the Supreme Court ruled that the federal courts have no role to play in blocking partisan gerrymanders. However, the court left intact parts of the Voting Rights Act that prohibit racial or ethnic gerrymandering.

First, the judges said Democrats in the Legislature had violated the mapmaking process laid out in the 2014 constitutional amendment by asserting power they did not have to pass new maps after the state’s independent redistricting commission failed. The court also found that the congressional map violated the constitutional amendment’s explicit ban on partisan gerrymandering.

Democrats had strenuously challenged both charges, arguing in court that the congressional and State Senate lines they drafted were legal and largely reflected shifting populations in New York. The Court of Appeals’ decision, however, was final.

Justice McAllister allowed only a single hearing in a courthouse in rural Bath, N.Y., five hours from New York City, for voters and interest groups to give input on the lines. Mr. Cervas, a postdoctoral fellow at Carnegie Mellon University who also advised Pennsylvania lawmakers on drawing new maps this year, worked quickly, delivering new maps in just a few weeks.

Mr. Cervas’s map removed one House seat altogether from upstate New York, to shrink the state’s delegation from 27 members to 26. New York was required to shed the seat after its population failed to keep pace with growth in other states in the 2020 census, continuing a decades-long trend.

The courts did not at any point strike down new Assembly district lines that had been adopted by the Legislature with bipartisan support.

Last week, Justice McAllister rejected an attempt by several politicians to intervene in the ongoing legal dispute to try to have those maps invalidated as well. The politicians filed a new lawsuit in state court in Manhattan on Monday to try to make their arguments again in a different venue, but it was not clear they would get a more sympathetic hearing.