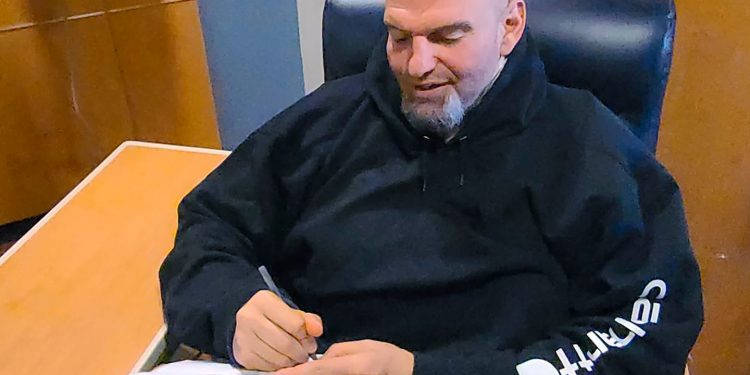 Faced with a potentially campaign-ending crisis this weekend, Democratic Senate candidate John Fetterman of Pennsylvania released a Sunday statement thanking the “kick ass staff and doctors” who treated his stroke.

The vernacular was not the stuff of parliamentary propriety — “I need to take a minute,” he wrote about stepping back from the trail — but that was the point, as is often the case with Fetterman. At 6-foot-8, with a shiny pate, a salt-and-pepper goatee, tattooed arms and a sports-bar fashion sense, Fetterman was announcing from a hospital bed that even in illness he remained a different kind of Democrat.

It’s a pitch that paid off Tuesday in a state primary that could set up the one-term lieutenant governor to lead his party into the marquee open-seat contest of the 2022 election — a chance for Democrats to find out whether they can arrest the building red wave and their declining White, working-class support with a candidate who does not fit easily into any partisan box.

Fetterman, 52, easily beat his principal Democratic rival, Rep. Conor Lamb, a clean-cut Marine Corps veteran and prosecutor whom President Biden had compared to his late son Beau and whom other party leaders as recently as 2018 had held up as an exemplar of the party’s future.

“Democrats are united around John, who is a strong nominee, will run a tough race, and can win in November,” Biden said in a statement Tuesday night. He added that Republicans in the race were “too dangerous, too craven, and too extreme to represent Pennsylvania.”

The win came as Democrats have been searching for an answer to the realignment that occurred during Donald Trump’s two presidential campaigns, when support for the party from voters without college degrees dropped. In Ohio, the party has selected a candidate, Rep. Tim Ryan, who has also cast himself as a champion of forgotten American industrial communities. Ryan’s first ad declared that the nation’s struggle was “us against China,” angering some Asian American civil rights groups.

From 2018: A Democrat in gym shorts tries to rally blue votes in Trump country

In Pennsylvania — where Fetterman is seeking the seat held by Sen. Patrick J. Toomey (R), who is retiring — President Barack Obama won non-college-educated voters by 15 points over Mitt Romney in 2012, winning 57 percent to Romney’s 42 percent, according to exit polls. Eight years later, Trump flipped the script, taking the same group of voters by nine points over Biden, 54 percent to 45 percent.

Republicans were set to choose Tuesday among three leading Senate candidates in a hard-fought primary contest — physician and celebrity Mehmet Oz, backed by Trump; financier David McCormick; and upstart Kathy Barnette, who on Jan. 6, 2021, participated in the “Stop the Steal” rally that preceded the violent assault on the U.S. Capitol.

John Brabender, a Republican consultant who has run races in Pennsylvania for decades, said Fetterman’s candidacy will test whether Democrats can tap into the same sort of populist, anti-establishment energy that worked so well for Trump, but with an entirely different set of policy solutions.

“I have seen people describe Fetterman as the left’s version of Donald Trump,” Brabender said. “What we are going to learn is whether policies or persona are what attracted people to Trump.”

Fetterman rose to national prominence as the mayor of a faded manufacturing town, Braddock, where he starred in a 2010 Levi’s ad about America’s industrial rebirth. He has embraced much of his party’s orthodoxy, supporting no government-imposed limits on abortion, an end to the Senate filibuster, a higher minimum wage, a path to citizenship for undocumented immigrants and higher refugee quotas. A past supporter of Medicare-for-all, he has described health care as a “fundamental human right” during the current campaign.

But he has also found ways to distinguish himself from the rest of his button-upped party. As mayor he officiated a same-sex marriage in 2013 before it was legal in the state. He first ran for Senate in 2016 with the endorsement of Sen. Bernie Sanders (I-Vt.) and became a vocal supporter of legalizing recreational marijuana. (Fetterman has not personally used the drug since a 1999 trip to Burning Man, he recently told Rolling Stone magazine.)

A supporter of legislation to address climate change, he has also been critical of the approach of some versions of the “Green New Deal” that are aimed at clamping down on natural gas fracking and nuclear power development before renewable options are available, an approach that helps in the parts of Pennsylvania that depend on natural gas extraction.

He has also faced criticism for a 2013 incident when, with a shotgun in hand, he confronted a Black man he believed was involved in a gunfire incident near his home in Braddock.

National Democratic strategists, despite his recent health scare, are excited about the matchup he would provide in the general election. They point to his success in 2018 when he was on the statewide ballot and won in six counties that Trump had carried two years earlier.

“We think he is going to be able to really be able to make a compelling case and hold down margins in parts of the state that Democrats have underperformed in,” said one Democratic strategist, speaking on the condition of anonymity to discuss internal deliberations. “At the core of his argument is that he is one of those unique candidates that really forms a connection.”

On Tuesday, his campaign announced that Fetterman had undergone a successful procedure to implant a pacemaker with a defibrillator to “help protect his heart and address the underlying cause of his stroke, atrial fibrillation.”

He has not made a public appearance since the stroke and planned to miss his election-night rally. His campaign has released two images of him from the hospital, both with him sitting in a chair, including one Tuesday of him filling out an absentee ballot.

“The good news is I’m feeling much better, and the doctors tell me I didn’t suffer any cognitive damage,” he said in his Sunday statement. “I’m well on my way to a full recovery.”

Republicans are expected to run a similar playbook against whichever candidate Democrats nominate, aiming to paint the party’s candidate as an extremist.

“The ads write themselves when you are running against John Fetterman. He has embraced the far left on just about every issue,” said Chris Hartline, a spokesman for the National Republican Senatorial Committee. “What the Democratic primary in Pennsylvania shows is that the fight is over. The progressives won.”

Democrats remain confident that Fetterman, or whoever wins the primary, will be able to resist the assaults, given the ideological profile of the Republicans in the race who have been scrambling to win Trump’s favor.

“I just don’t think Republicans are going to give an alternative. I’m not sweating over it,” said J.B. Poersch, the president of the Senate Majority PAC, a group aligned with Senate Majority Leader Charles E. Schumer (D-N.Y.). “Our challenge is the economy. The challenge for our guy is to meet the moment and show why he’ll pick up the fight for working people.”

On Tuesday afternoon in Lawrenceville, one of Pittsburgh’s poshest and most gentrified neighborhoods, many Democratic voters said they voted for Fetterman, citing his 15-year tenure as mayor of nearby Braddock and saying he has the right mix of everyman appeal and liberal ideology.

“I want a progressive,” said Sean Vannata, a 25-year-old social researcher for a nonprofit group.

Vannata said he was not concerned about the stroke that sidelined Fetterman in recent days: “He seems to be okay. That didn’t scare me off.”

Ellen Lundie, 32, an ordained minister, said she also followed his career in Braddock. “He has a good reputation,” she said. “It seemed like he would be there for anyone, in shorts and a hoodie.”

“I just kind of like him,” said Ruth Barsotti, 68, who owns a wine-selling business with her husband. She said she thinks he can win in the general election because he “has that everyman vibe.”

But earlier Tuesday morning, older Democratic voters at a West Philadelphia polling station said they were not excited about the hulking, tattooed guy known for wearing shorts in winter.

“I’m not against tattoos and all that stuff, but I want to see a tender side,” said Thelma Teake, a 66-year-old who runs a day-care center. “He’s too hard.”

Her vote went to the more centrist Lamb, who she said has “class.”

And even in his hometown, Fetterman elicits mixed reactions. Some hail him as a reformer who helped the town regain its pride, while others see him as a self-interested politician who used it as a backdrop.

“I’ve known John since he first came to Braddock,” said Phyllis Brown, 79, a retired office worker handing out Fetterman fliers outside a polling place at New Hope Baptist Church. “I saw him marching around in those black boots and that black shirt with a bunch of kids. Once I got to know him, he’s a person with a great heart.”

Sitting across from Brown was Annette Baldwin, 84, the chair of the Democratic Town Committee. She was slumped in a chair, fitting in time for a sandwich as she made her rounds on the day of the primary election. She scowled at the mention of Fetterman.

“He didn’t do nothing,” Baldwin said. “He used us to get to where he is. He doesn’t give a damn.”

Maura Ewing in Philadelphia and Nick Keppler in Braddock and Pittsburgh contributed to this report.