With help from John Hendel

Editor’s Note: Morning Tech is a free version of POLITICO Pro Technology’s morning newsletter, which is delivered to our subscribers each morning at 6 a.m. The POLITICO Pro platform combines the news you need with tools you can use to take action on the day’s biggest stories.Act on the news with POLITICO Pro.

— Broadband timing: Democrats in Congress are hoping to tackle broadband legislation before the August recess.

— Antitrust moves: The House Judiciary Committee is moving quickly on antitrust legislation, with a markup scheduled for Wednesday. But some Democrats want to slow down.

HAPPY MONDAY! WELCOME BACK TO MORNING TECH. I’m your host, Benjamin Din. I went to a hair salon the other day for the first time in months, after some successful and not-so-successful DIY attempts. (Apparently the regular salon experience is not that different from going to the Amazon Salon in London, which sadly does not involve robots cutting your hair.)

Got a news tip? Got thoughts on what will happen with the antitrust bills? Email [email protected]. Got an event for our calendar? Send details to [email protected]. Anything else? Team info below. And don’t forget: Add @MorningTech and @PoliticoPro on Twitter.

A message from NCTA – The Internet & Television Association:

In the wake of COVID-19, a reliable internet connection has become more critical than ever. But connecting all Americans to broadband requires smart solutions – targeting funding where it is needed most and providing a permanent safety net so that everyone can participate. The cable industry is committed to being part of the solution by expanding and upgrading infrastructure throughout America, offering low-cost plans that promote internet adoption, and building the 10G network of the future.

DEMOCRATS CONSIDER MOVING BROADBAND BILLS BEFORE AUGUST BREAK — Democratic leaders on Capitol Hill’s commerce panels told John they can’t wait to mark up the broadband portions of the Biden administration’s proposed infrastructure legislation — though the timing still hinges on whether President Joe Biden nails down bipartisan consensus with Republicans or Democrats decide to go it alone.

House Energy and Commerce Democrats want to mark up their LIFT America Act, H.R. 1848 (117), as the vehicle, according to telecom subcommittee chair Mike Doyle (D-Pa.). That measure would provide more than $90 billion to expand internet connectivity. “Whenever we get the green light from leadership to mark up the LIFT Act, we will,” he said, adding he believes his caucus wants to make that happen before Congress’ monthlong August recess. But he stressed the bipartisan talks as an X factor: “We still have a ways to go.”

Senate Commerce Chair Maria Cantwell (D-Wash.) hopes to advance broadband portions of a bill through her panel in July, she said, and the “big numbers” mentioned by both sides have been promising (Biden wants $100 billion, but both parties say they could get behind $65 billion). She praised lawmakers in both parties for being “engaged” on issues like the digital divide and how to close it: “On making an investment, they’re pretty much aligned.”

— The need for speed: Democrats “think we should be looking at spending a little bit more money to put fiber and make it possible for everybody eventually to transition” to 5G, Doyle said, expressing fear that Congress might do a package “on the cheap” and consign many areas of the country to the current FCC definition of broadband, a modest 25 Megabits/second download and 3 Mbps upload. “We might not do 100/100 [Mbps], but I don’t know why we would shoot so low,” he added.

— Lingering concerns: Last week, a bipartisan group of lawmakers held a press conference to outline their antitrust agenda. Rep. Ken Buck (R-Colo.), who is sponsoring all five bills alongside Judiciary antitrust panel chair David Cicilline (D-R.I.), conceded that neither side of the aisle would support the full package unanimously, but said it was a starting point.

On Friday, leaders of the centrist New Democrat Coalition wrote to top House Democrats to argue the committee should hold full legislative hearings on the bills, “to better understand their impacts and the intended and unintended consequences of the legislation,” before marking them up. (The Computer and Communications Industry Association, which counts Amazon, Facebook and Google as members, issued a similar request earlier this month.)

House Minority Leader Kevin McCarthy is also opposed to the bills, and a group of conservative voices, led by advocacy group Americans for Tax Reform, wrote to lawmakers last week, labeling the antitrust bills as a Democratic power grab and urging them to vote against the package.

— AGs give the OK: The committee will also mark up H.R. 3460 (117), backed by Buck and Cicilline. Dozens of state attorneys general wrote a letter in support of this bill, which would allow them to choose where their antitrust cases are heard, despite tech companies’ efforts to move them to friendlier venues, Emily reported Friday.

— But before the main event: Sen. Mike Lee (R-Utah) will speak Tuesday at a NetChoice event focused on antitrust reform. Last week, he introduced a bill with Sen. Chuck Grassley (R-Iowa) that would strip the FTC of its antitrust responsibilities. It’s a long shot in an evenly split Senate, especially now that Democrats have progressive antitrust advocate Lina Khan leading the agency.

— For more: Leah joined POLITICO Dispatch in a podcast out this morning to talk about Khan and the antitrust bills.

BYE BYE, HUAWEI? — The U.S. may soon finally let flow the $1.9 billion that Congress appropriated to help rural telecom carriers rip out and replace equipment from Chinese manufacturers Huawei and ZTE, according to acting FCC Chair Jessica Rosenworcel. She recently told reporters she hopes commissioners will vote at the FCC’s July 13 meeting and that “shortly thereafter we’ll be able to get the [rip-and-replace] program up and running.”

And on Friday, a U.S. appeals court said that purchases of Huawei’s 5G technology cannot be subsidized by federal broadband development funding administered by the FCC. The Chinese telecom giant had argued the FCC had overstepped in labeling it a national security threat. “But no such skullduggery is afoot,” the court wrote. “Assessing security risks to telecom networks falls in the FCC’s wheelhouse.”

The interactive map doesn’t use any new data, meaning it doesn’t solve policymakers’ yearslong concerns about inadequate data, and even the Biden administration says it isn’t authoritative, as John reported for Pros. High Tech Forum’s Richard Bennett wrote in a blog post that the map “doesn’t add anything to the broadband discourse that we didn’t already know.”

“We’re glad the NTIA is out with this version of a map, but it’s not a substitute for the FCC’s more accurate and granular approach which will identity every home and business in America and whether — or not — it has broadband,” USTelecom president Jonathan Spalter said in a statement. Until the FCC completes its own maps, “we’re just continuing to play pin the tail on the donkey,” he added.

— Stepping back: The FCC’s broadband maps are taking on new importance as legislation to fund a broadband buildout takes shape, given a law enacted last year that requires the agency to get better data before it can dole out money to expand broadband access. Fresh mapping data might not come out until late this year or early next. 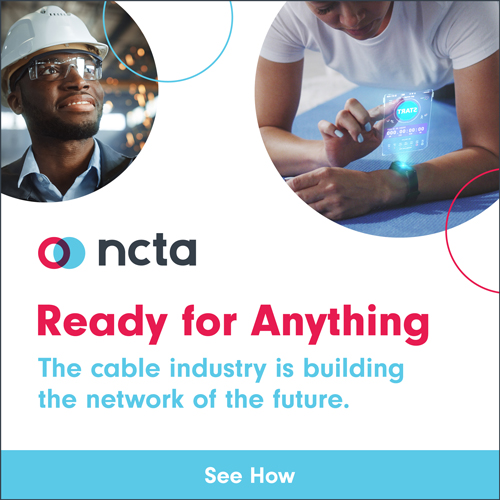 The Atlantic Council’s Digital Forensic Research Lab is launching its Democracy & Tech Initiative, which will be led by Rose Jackson. She is a Senate and State Department alum. Katie Harbath will join the lab as a nonresident fellow. She was previously a public policy director at Facebook. … Brian Buchwald, Shann Biglione and Dan Gaynor are launching Kelp, an AI-powered platform focused on corporate reputation. Gaynor, an Obama and Martin O’Malley alum, and Buchwald most recently were at Weber Shandwick, and Biglione was at Publicis Media. … Brock Murphy is now an executive assistant at SpaceX. He was a confidential assistant at OMB during the Trump administration.

From our friends at POLITICO Influence: Stefania Yanachkov joined Waymo’s federal policy team. She was previously at the Congressional Hispanic Caucus Institute. … Dao Nguyen, a principal at Cornerstone Government Affairs, will be executive director for the Coalition for Workforce Innovation, which fights to keep gig workers classified as independent contractors. She’ll represent the coalition on the Hill while Evan Armstrong, the Retail Industry Leaders Association’s vice president of workforce policy, will serve as coalition chair and Brian Bennett, vice president for government affairs at the Direct Selling Association, will be vice chair.

Not great: “The World Relies on One Chip Maker in Taiwan, Leaving Everyone Vulnerable,” WSJ reports.

Unintended consequences: Some people are having trouble getting unemployment benefits. The culprit? Facial recognition technology, per Vice’s Motherboard.

A message from NCTA – The Internet & Television Association:

When America needed it most, cable’s broadband networks were ready. The robust and reliable infrastructure supported the surge in traffic, keeping our economy moving, students learning, and families connecting. The industry also worked to expand access by adding more low-cost programs to reach more people.

Meanwhile, they have continued progress on building the 10G network of the future, which will deliver home internet speeds of up to 10 gigabits per second, with enhanced capacity, reliability, and security.

But connecting all Americans to broadband requires smart solutions – targeting funding where it is needed most and providing a permanent safety net so that everyone can participate. The cable industry is committed to being part of the solution by expanding and upgrading infrastructure throughout America, offering low-cost plans that promote internet adoption, and building the 10G network of the future.

Say goodbye: Snapchat is getting rid of the “speed filter,” which was connected to deadly car crashes, NPR reports.

Tech’s two cents: CCIA, the Internet Association and the Information Technology Industry Council told Canada in separate filings that instead of a digital services tax, it should focus on the ongoing global tax talks.

What tech-minded lawmakers want in this year’s defense bill

A compact robotic limb to support humans during everyday activities