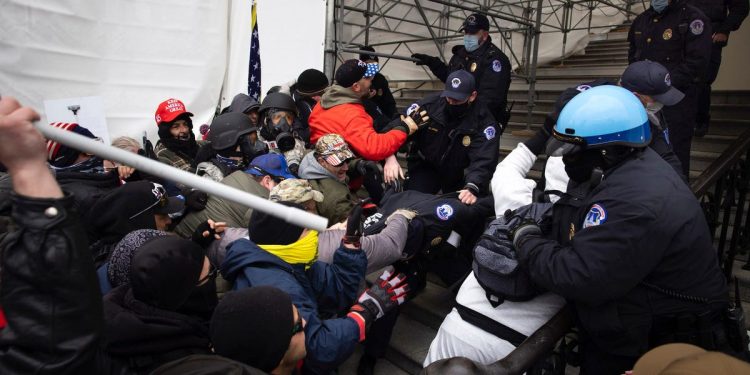 
The GOP faced a wave of criticism on Friday after Republican National Committee Chairwoman Ronna McDaniel referred to the deadly January 6 insurrection as “legitimate political discourse.”

“We’ve had two members engage in a Democrat-led persecution of ordinary citizens who engaged in legitimate political discourse,” McDaniel told The Washington Post as the RNC moved to censure Republican Reps. Adam Kinzinger of Illinois and Liz Cheney of Wyoming for serving on the House committee investigating January 6.

“This has gone beyond their original intent,” she added. “They are not sticking up for hard-working Republicans.”

Democrats, historians, and democracy experts, among others, ripped into the Republican party for framing the deadly riot in this way.

Walter Shaub, a former director of the Office of Government Ethics, said the “deadly insurrection that sought to stop the transfer of power was not ‘legitimate political discourse,’ and any persons or groups who say so are declaring war on democracy and aligning themselves with terrorists.”

Jennifer Mercieca, a historian of American political rhetoric at Texas A&M University, said she can say with “certainty that the January 6th insurrection was not legitimate, nor was it ‘political discourse,'” adding that the riot “was political violence.”

Describing January 6 as an “attempted coup,” Yale historian Joanne Freeman said the “violent storming” of the Capitol “is not legitimate political discourse.”

“And censuring Cheney and Kinzinger for doing damage to the republic? The right are truly masters of projection,” Freeman added.

Joe Walsh, who ran for president in 2020 as a Republican and previously served in the House, in a tweet responding to McDaniel’s comments said, “This party cannot be saved.”

And Cheney, for her part, tweeted a video of violent clashes on the Capitol on January 6, saying, “This was January 6th. This is not ‘legitimate political discourse.'”

The RNC did not immediately respond to Insider’s request for comment.

The January 6 insurrection was provoked by President Donald Trump’s lies about the 2020 election, including the false notion that it was “stolen” from him. Trump and his GOP allies pushed baseless allegations of mass voter fraud, unsuccessfully filing dozens of lawsuits to overturn the results.

As Congress met to certify the Electoral College vote on January 6, a pro-Trump mob violently stormed the US Capitol. Insurrectionists fought with and mercilessly beat police, in some cases with their own weapons, as lawmakers hid and feared for their lives. Nine people died in relation to the riot.

Since January 6, Republicans have engaged in a broad effort to whitewash the insurrection and downplay its significance. GOP Rep. Andrew Clyde of Georgia, for example, described the riot as “a normal tourist visit.” And Sen. Ron Johnson of Wisconsin said the Capitol attack was a largely “peaceful protest.” The censure of Kinzinger and Cheney is indicative of the GOP’s desire to rewrite the history of the insurrection and the party’s unprecedented effort to overturn the election.