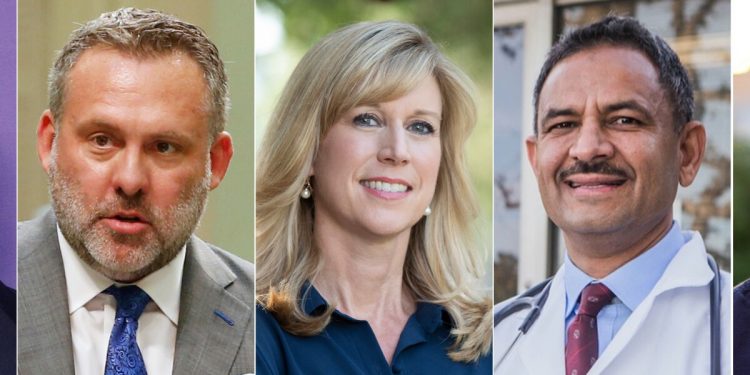 
Democrats are on defense across the country in this year’s midterm elections but appear to believe some of their best chances for flipping GOP congressional districts are in California.

Five of six candidates added to their “Red to Blue” program on Monday are in this state, according to an announcement by the Democratic Congressional Campaign Committee.

“The Democratic Party is stronger because of candidates like these who have joined the fight to represent their community,” committee Chairman Sean Patrick Maloney said in a statement. “Unlike their extreme Republican opponents, these candidates will fight for their district, work to protect reproductive freedom, battle to lower prices on groceries, gas and prescription drug costs, and seek commonsense solutions to combat gun violence terrorizing communities.”

Candidates must show viability by hitting donation goals as well as having robust campaigns and field operations to qualify for the committee’s Red to Blue program, which provides fundraising, organizing and other support.

Many of the California Democrats in the program are running in districts made more favorable in the redrawing of congressional maps after the U.S. census. Redistricting, which is conducted by an independent panel in California, occurs once every decade, and was especially fraught last year because the state lost a congressional seat for the first time in its history.

Among those added Monday are two competing for open seats: Dr. Kermit Jones is running against GOP Assemblyman Kevin Kiley in a sprawling district that spans much of eastern California; Assemblyman Adam Gray is vying with Republican nursery owner John Duarte in the Central Valley.

The sixth candidate added by the committee is Illinois meteorologist Eric Sorensen, who is competing with Republican attorney Esther Joy King.

Before Monday’s announcement, the only Californians on the list had been Navy Reserve intelligence officer Jay Chen, who is trying to defeat GOP Rep. Michelle Steel in an Orange County-based district, and Assemblyman Rudy Salas, who is vying against Republican Rep. David Valadao in the Central Valley.

Republicans have a similar program for promising candidates who meet fundraising and organizational benchmarks. Californians Kiley and Duarte are part of the “Young Guns” program, as are San Joaquin County Supervisor Tom Patti, who is running against Rep. Josh Harder in the Central Valley; former Orange County GOP Chairman Scott Baugh, who is vying with Rep. Katie Porter in Orange County; and former San Juan Capistrano Mayor Brian Maryott, who is challenging Rep. Mike Levin in a district that straddles Orange and San Diego counties.

Democrats are facing headwinds going into the November election, with the historic trend that a president’s party loses ground in the first midterm compounded by President Biden’s low approval ratings and economic challenges including inflation and high gas prices. But the party is hopeful that recent Supreme Court rulings, notably the overturning of federal protection for abortion access, could help motivate voters, particularly suburban women in places like Orange County.

Some of the candidates Democrats are aiming to highlight, however, are behind in funding, according to disclosures filed Friday.

Smith is viewed as one of the party’s best chances of flipping a district — she lost her 2020 race with Garcia by 333 votes, and after the every-decade redrawing of congressional maps, their district has grown more Democratic. But she ended June with $306,000 in the bank, compared with Garcia’s $1.7 million, according to fundraising disclosures filed with the Federal Election Commission on Friday.

Democrats have grown excited by Rollins’ prospects against Calvert, notably because the district has grown more liberal with the inclusion of cities such as Palm Springs. But Calvert had nearly $1.4 million in his campaign coffers at the end of June, compared with Rollins’ $479,000.

In two districts that favor Republicans, Democrats reported significant money as they prepare for the fall. Jones had more than $595,000 in the bank at the end of June, more than three times as much as Kiley. And Mahmood had a little more than $1.2 million, a little shy of Kim, who had to spend millions of dollars to fight off a primary challenger from her right flank.

Bitcoin surges past the $22k level as bulls regain control