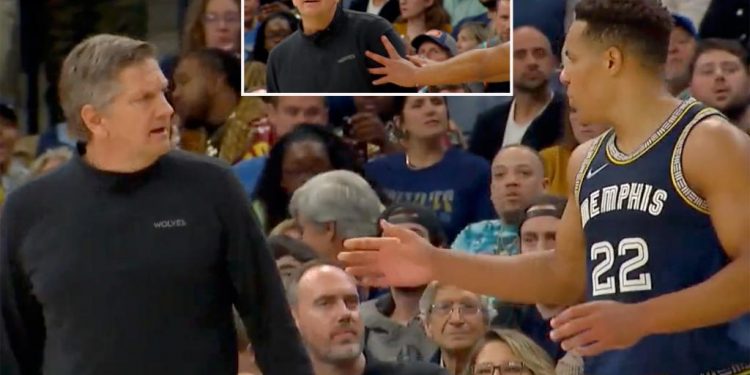 Grizzlies guard Desmond Bane learned that pushing a coach is a no-no in Tuesday’s 111-109 Game 5 win against the Timberwolves.

Bane was caught shoving Minnesota head coach Chris Finch to the side while trying to inbound the ball in the second quarter — and Finch wasn’t happy.

The second-year Minnesota coach raised his arm to shake Bane’s hand in a tense moment that was caught by a referee, who intervened and hit Bane with a technical foul.

The Grizzlies-Timberwolves series has been a highly entertaining battle between two of the league’s youngest teams. Memphis head coach Taylor Jenkins was fined $15,000 Monday for criticizing the officiating after Game 4, which ended in a Timberwolves win.

After a dramatic comeback victory in Game 5, Bane told reporters that the Timberwolves were talking trash down the stretch when they were up.

Grizzlies star point guard Ja Morant — who gifted Bane his Most Improved Player award earlier this week — scored the game-winning layup with one second left on the clock after Anthony Edwards hit the tying 3-pointer seconds before.

Bane finished the win with 25 points on 9-for-20 shooting to help push the Grizzlies to a 3-2 series lead.

Game 6 is scheduled for Friday in Minnesota.