Destiny 2: The Witch Queen is the best FPS campaign in years 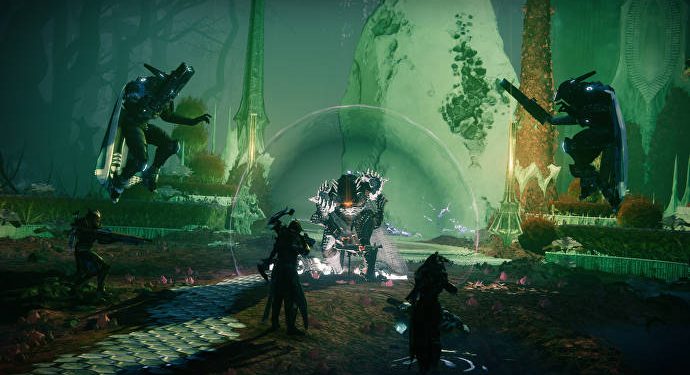 
We’re about a week into Destiny 2‘s latest expansion, Witch Queen, and already I’m falling back in love. I’ve dusted down my fancy Warlock robes, re-familiarised myself with all that volatile Void space magic, and now I’m thumbing rounds into my Jade Rabbit as I get ready to pop even more Hive grubs. Destiny is back, baby, and it’s never been better.

I dropped off, hard, at Beyond Light. Launching way back in November 2020, I tried to love all the Stasis stuff that was going on, but it irritated me – playing the Crucible back then when you could be frozen on the spot was more irritating than just about any other PvP activity I’ve ever experienced in games. Alongside obtuse gear systems, and some Seasonal stuff I just didn’t care about, I was done with Destiny for a bit. And that was a shame, because I’ve been with the game since the Destiny 1 beta back in the day.

So I came crawling back with Witch Queen. A marketing campaign and hype train combo like that will do that to you. I’ve lost touch with some friends lately and shooting some space idiots whilst chatting is always a good way to reconnect, too. The stars (or pyramid ships, or whatever) aligned.

What I didn’t expect was the best FPS experience I’ve had in years waiting for me when I logged in. The new Legendary difficulty mode in the Campaign embarrasses recent CoD efforts in terms of quality and fun, and it even makes last year’s Halo Infinite look like a poor imitator when it comes to intense, off-the-wall sci-fi shooting.

For the uninitiated, Legendary mode in the Story missions is a set-difficulty run through the latest set of content that makes the Campaign (something you’ve traditionally been able to sleepwalk through) feel more like a Nightfall, or other high-level challenge. And the rewards are just as tasty as those end-game activities, too.

Even if, like me, you’ve been MIA for a good few months, you can boot straight into Legendary mode and use the new base level gear you’ll have to work through your enemies. It feels like playing Halo in LASO mode; there are modifiers for your enemies, you need to think about your positioning, you cannot get greedy, and you’ll need to actually pay attention to your build.

It takes all that lovely stuff you get in Raiding and boils it down to a much more simplistic, digestible experience – and close friends have told me it’s the same if you’re coming in hot off the last Season of the game, too. Being able to go straight into a very well-written story that forces you to swap between your guns, powers and tactical brain on a whim? It’s single-player-friendly, FPS gold dust that’s sadly rare in the service game era.

Better yet, there’s the writing. I’ve never really been that big a fan of Destiny’s space opera storytelling – it does big beats well, but the chaff in between is often trite. In The Witch Queen, though, there are some years-in-the-making payoffs that literally left me slack-jawed. There are some revelations (followed up by cool gameplay moments) that are quintessentially Destiny, and made me feel like I was playing Rise of Iron or something all over again.

The Witch Queen missions have this wonderful three-pronged pace to them, especially on Legendary; you’ll be introduced to some gorgeous new area, then get a big juicy morsel of narrative meat to chew on, then you’ll get served a boss (or a mini-boss, depending on the length of the level). It’s phenomenal. It’s brilliant. It’s some of the tightest non-endgame work Bungie has ever put out. And yes, I’m going back to Halo when I say that. This is the real deal, here.

Even the checkpointing – and the way the checkpoints refill all your ammo and energy slots – works a treat, and makes these hard, dangerous enemies actually feel hard and dangerous. So many times, in Destiny, you’ll meet Heften Boom’Anthrall, infamous raider and eater of planets (or something) and kill him with a blast of heavy ammo before moving on. No more; these space bandits are hard bastards for a reason, and you’re going to know about it, Guardian. Good!

Throw in a new threat – the Lucent Hive – and you’ve got a Campaign with so many tools it never needs to draw on the same combination of them twice. The Lucent have Ghosts, like you, that can respawn them. So if you headshot some gnarly Hive Knight in the middle of a firefight, it will come back to life unless you run in and pop its Ghost in your hands like a crusty old cosmic grape. This makes you reassess your gunfights and your planning, and provides plenty of moments where you throw caution to the wind and dive in headfirst so that irritating champion doesn’t come back to life and gun you down. Again.

And that’s just the start. The Seasonal content that comes in around what’s on offer in the Story missions is also top notch. Taking a three-person Fireteam into the mind of a captured Hive Champion is one hell of a sell (and sounds like the setting of some cracked Black Mirror-cum-Psychonauts fanfic), but the end result is a dungeon run that feels tight, never outstays its welcome, and allows you to drip feed a steadily improving carousel of loot into your inventory. Win, win, win!

The Seasonal cosmetics may be fairly ugly, but that’s OK – they can just be infused into other things that make me look like the brooding space nerd that I always wanted to be. At least I can craft my guns (!) to have the perks I want (!!) and not have to waste time grinding out RNG cheeses for the best drops (!!!), even if I do look like a doofus.

I am glad to be back in Destiny 2’s weird universe of disappearing and reappearing planets. There are still issues with the game – there likely always will be – but if content drops like Witch Queen illustrate the new direction Bungie is taking, I’ll happily put up with all its bullshit for another 10 years-plus.