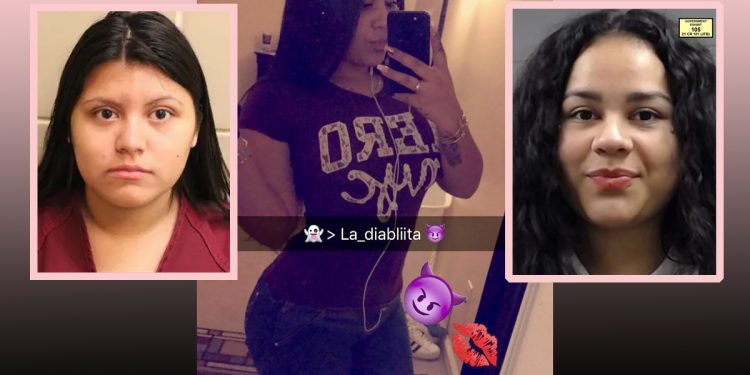 If you’ve been following the trial of the young woman known as Diablita, it likely won’t surprise you to learn she was found guilty on Monday morning.

22-year-old Leniz Escobar was accused of luring five teenage boys to be killed by machete-wielding members of the notorious MS-13 gang in a Central Islip park on Long Island. According to testimony throughout the trial, the boys had thrown up gang signs on social media in an attempt to look cool to girls. Escobar (above, right) and her friend Keyli Gomez (above, left), who were affiliated with the gang, invited the boys to come smoke weed with them in the woods. They were then ambushed by a dozen gang members who hacked four of the boys to death in a bloody massacre. Only one victim, Elmer Alexander Arteaga Ruiz, escaped with his life by running away. He, Gomez, and another gang member, David Gaitan-Rivera, all testified in the trial to Escobar’s role in the killings.

In the most shocking moment, Gaitan-Rivera told the court how Diablita, which means the Little Devil in Spanish btw, had “licked the blood off her lips” after a boy was hacked to death while begging her for help. Escobar was only 17 years old at the time of the crime.

On Thursday the jury deliberated for a little over three hours, after which they told the judge they believed they had already reached a verdict — but that members of the jury wanted to sleep on it over the weekend. Clearly it didn’t change things as they reportedly convened for just 16 minutes before sending a verdict of guilty on Monday on all counts.

“With today’s verdict, Escobar has been held responsible for the crucial role that she willingly played in orchestrating one of the most vicious and senseless mass murders in the district in memory. The defendant showed utter disregard for human life by leading the victims into a killing field, to their slaughter, to enhance her stature with her fellow cold-blooded murderers within the MS-13 gang. It is my hope that Escobar’s conviction will bring some measure of closure to the relatives of the victims and serve as a warning to other gang members that this Office, together with our law enforcement partners, will not rest until everyone responsible for these murders is held accountable and the MS-13 no longer poses a danger to our district.”

It was reported that Escobar remained emotionless as the verdict was read out. Of course! This is someone who watched and smiled as four young men were chopped up in front of her, close enough to splatter blood on her. Diablita’s advocate Jessie Siegel said of his client:

“She took the verdict as well as a person could I think, you know… she understands the serious consequences for her.”

But what will those consequences be? The sentencing is set for September, at which time she faces life in prison, and frankly we’d be surprised if she got less.

Of course, for some it won’t be enough. Victim Jorge Tigre‘s uncle said right after the verdict:

“She has to pay the price, in this life or the next. She deserves it because it’s her fault my family lost someone. None of us are angels. We all make mistakes. But not like that, not what she did. It’s very painful. For me, it was very hard, very painful.”

“Personally for me, just kill her. End her. Make her suffer like she made them suffer. She didn’t swing the machete, but she was the one who brought them there.”

New York no longer has the death penalty, but this was a federal crime. However, prosecutors said at the time of Diablita’s arrest that she wouldn’t be facing death due to the fact she was a minor herself when the crimes occurred.

What do YOU think of this outcome??