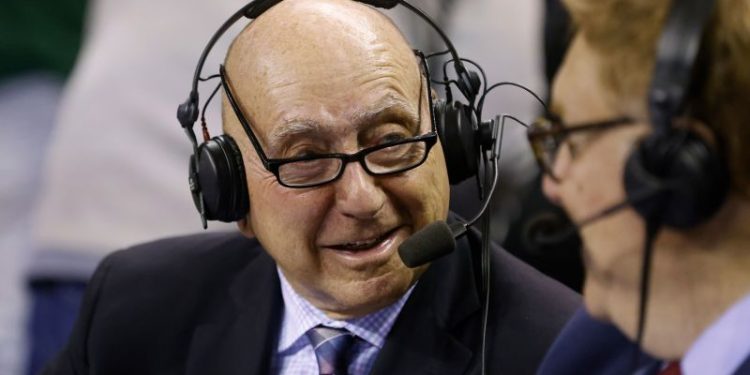 There’s an understandably strong sentimental streak running through “Dickie V.,” a documentary tribute to ESPN analyst Dick Vitale, as he deals with his mortality after being sidelined by cancer. Yet the lack of depth about Vitale’s influence over how college basketball is covered, to use his parlance, prevents this from being truly “Awesome, baby!” or a “primetime player.”

At 83, Vitale is clearly emotional as he looks back at the life that he has enjoyed, having thrived as a college coach and gotten fired by the Detroit Pistons before reluctantly stumbling into color commentary, calling his first game for a then-fledgling network called ESPN in December 1979.

Vitale won over many fans with his infectious enthusiasm and love of the game, and coaches with his dense knowledge of how they operated. “In the midst of all that passion there was really good basketball knowledge,” says Notre Dame coach Mike Brey.

There are plenty of heartwarming elements to Vitale’s story, from his romance with wife Lorraine to his friendship with the late Jim Valvano, another coach turned analyst who died of cancer. Vitale will be honored with the award named for Valvano at the ESPYs on July 20.

Vitale also talks emotionally about having lost vision in one of his eyes and his sensitivity to the way that looked, as an adult as well as a child.

At its core, though, “Dickie V.” is a chronicle of what Vitale has meant to college basketball, and vice versa, and it’s there where the documentary feels a bit half-baked. Specifically, Vitale’s coziness with coaches colored his approach to covering them, singing their praises while often overlooking their excesses.

“He builds. He doesn’t tear down,” says Kentucky coach John Calipari, which sounds laudable, except for the fact that there are aspects of collegiate sports that deserve to be torn down, or at least viewed through a more objective prism, as New York Post columnist Phil Mushnick pointed out several years ago. Those observations drew a rebuke from Vitale, who has never hidden his admiration for figures like controversial coach Bob Knight or Calipari.

Nor does “Dickie V.” address how Vitale’s bombastic style has been adopted by other analysts, some of whom have turned up the volume to ridiculous levels. While imitation is a form of flattery, that, too, represents a part of his legacy.

Former Notre Dame coach turned analyst Digger Phelps calls Vitale “the master of marketing,” which has indeed been part of his genius, serving as what amounted to an ambassador for college basketball, in a way that has earned admiration from his broadcasting peers and coaches alike. “I’m in awe of Dick Vitale,” says “SportsCenter” anchor Scott Van Pelt.

It’s certainly hard to fault ESPN’s sentiment or timing, coming as it does, as Vitale tearfully notes, in “the last chapter” of a blessed life. But “Dickie V.” works better as a tribute than it does as a fully-realized look at not only Vitale’s unique voice, but the echoes associated with it.