Did Amy Schumer Steal Oscars Joke About Leonardo DiCaprio? Here’s What She Says… 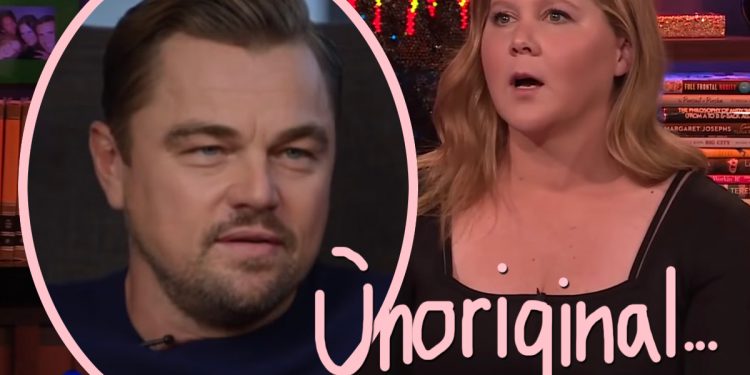 
Joke stealing is one of the worst offenses possible in the comedy world, but would Amy Schumer really be so bold to do it on the Oscars stage?

As a matter of fact, joke stealing allegations have followed Amy as her star has risen over the years. She’s always been adamant that her work is original — but in this case, her defense appears to be that this joke wasn’t original (in that it didn’t originate from her). Here’s the quip that’s come under question, a roast of Leonardo DiCaprio:

“He has done so much to fight climate change and leave behind a cleaner, greener planet for his girlfriends.”

The dig closely resembles a viral tweet from 2021 (although we should point out, even in that case, one of the replies included a TikTok of another extremely similar Leo joke).

During a recent appearance on Watch What Happens Live, the comedian shut down any suggestion that she’d lifted the joke from social media. She said:

“OK. Well, I would like to say, I haven’t personally been on Twitter. I’ve had my assistant do it, just so I can remain alive and not kill myself. And also, that joke was written by Suli McCullough.”

Rough stuff to be throwing another writer under the bus, but it’s also no surprise that she didn’t write it herself. It’s common practice to have a team of writers providing material for the Oscars hosts. (The jokes she did write for the show were a lot more controversial, and ultimately cut.) The presenters get a script too, of course, although sometimes they may go off book… to mixed results.

The 40-year-old then defended her reputation in general, saying:

“But I thank you guys, always, for making sure that I don’t start thievery. I just got to do a lie-detector test on Vanity Fair and yhey asked me, thank God, ‘Have you ever stolen a joke?’ and I said no, and it was ‘that’s true.’ So, everybody just chill. It’s crazy. I’m funny enough, I don’t need to steal s**t.”

Amy actually pledged to take a polygraph on joke stealing way back in 2016, when accusations of stealing jokes from fellow female comics made headlines. (For the record, lie detector tests are actually notoriously unreliable, but that’s a conversation for a different day!)

We can’t speak to Amy’s full career, but the Leo joke is pretty run-of-the-mill, so we’re definitely willing to give her a pass on that one. Host Andy Cohen really held her feet to the fire on some controversial subjects, however, going on to ask her about Louis C.K.’s recent Grammy win. She replied:

Related: Chris Rock Joked About Will Smith AGAIN In His Latest Comedy Show!

Of course, she also dished on the infamous Will Smith/Chris Rock slap, sharing:

“I’ll just say, I was backstage, and I knew I had to go out… and it really felt like the Situation Room of comedy. We were all just watching the monitor, and then he won… Everyone was just kind of floored – the whole thing. And I was just thinking, what am I going to do when I go out there? … It really changed the air in the room!”

The momma of one also revealed that she had donated her (apparently meager) $15,000 earnings for the hosting gig to Planned Parenthood. We have to give her props for that!

Ch-ch-check out more of her WWHL appearance (below):

Will US do something similar?