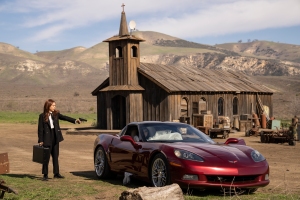 The show from The Responder producer Dancing Ledge Productions and Emily in Paris outfit Jax Media is one of Disney+’s flagship international offerings and was revealed a year ago as one of the first Disney+ UK originals. The genre-busting series will launch on September 8 on Disney+ globally, adult-skewing vertical Star in Latin America and Hulu in the U.S.

The show tells the story of Katie (Rosa Salazar) and Stefan (Gavin Drea) who fall for each other at a wedding and begin an affair, despite Katie already having a fiancé. Two months later at Katie’s wedding, her new husband and his entire family are murdered. Stefan and Kate blame each other and the search for the truth begins.

As with many of Disney+’s early British commissions, the eight-parter comes from up-and-coming creators in the shape of Oliver Lyttelton (Cheaters) and George Kane (Crashing). Disney+ is targeting 60 non-U.S. originals over the next two years and other UK shows include Sally Wainwright’s The Ballad of Renegade Nell and heist series Culprits.