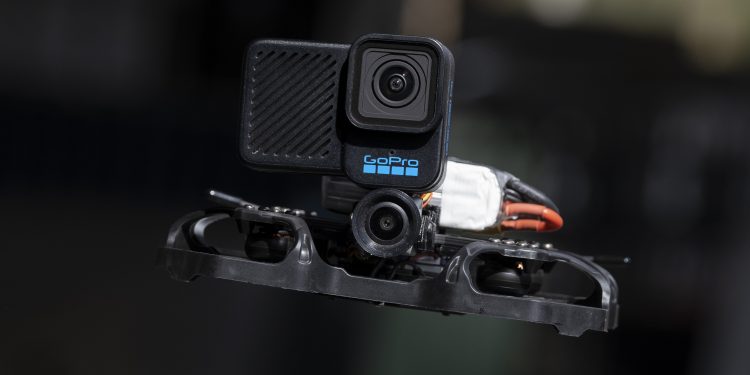 
The DJI Mini 3 Pro has only just taken flight, but the drone king is already rumored to be following it up with a compact, indoor-friendly take on its DJI FPV model.

According to leaks from @DealsDrone and @OsitaLV, who have both previously been reliable sources of DJI rumors, the DJI Avata will be a much smaller version of the DJI FPV, which is a ‘First-Person View’ drone that you fly using a headset.

Some early renders of the drone (below), which seem to be based on a DJI patent, show a drone with large prop guards and a very different design to the DJI FPV. This suggests it’ll be a so-called ‘cinewhoop’ drone, which are known for being small, agile and ideal for indoor filming.

The @DealsDrone post claims the “Avata is compact and weighs about 500g”, that “it can fly indoors” and “the photo quality is much better” than the DJI FPV, with a camera that could be in the ballpark of the Mini 3 Pro. That drone has a relatively large 1/1.3-inch CMOS sensor, which could be useful for a drone that’s designed to primarily shoot in dimly-lit, indoor conditions.

Avata is compact and weighs about 500gCan fly indoorsThe photo quality is much better (guess that the Mini 3 Pro is the same)Greatly improved battery lifeManual mode is not supportedHead chase modeVibration function Touchpad for glasses menuGlasses can connect to phone pic.twitter.com/WUqpjXXEnKMay 15, 2022

Some of the other rumored features suggest the DJI Avata will be aimed at relative novices rather than experienced pilots. There will apparently be a “head chase mode”, which perhaps refers to subject-tracking, plus “glasses” that can connect to your smartphone.

Interestingly, @DealsDrone says that “manual mode is not supported”, which would be unusual for an FPV drone. The DJI Avata will also apparently have a “greatly improved battery life”, which presumably refers to the relatively limited 20-minute flight time of the DJI FPV.

If you like the idea of shooting cinematic indoor videos like Tesla’s recent viral fly-through of its Berlin Giga Factory, DJI’s next drone could be an exciting, specialist new option. And it seems we won’t have to wait long for it to land, with @DealsDrone predicting a release date sometime from “July to August”.

From bowling alley fly-throughs to Tesla’s impressive Giga Factory promo, small FPV drones have been behind some impressive, viral social media videos in the past couple of years – so it would make perfect sense for DJI to finally make an indoor-friendly ‘cinewhoop’ model.

Its current DJI FPV is seriously fun, but quite large and designed more for shooting outdoor videos, while its DJI Digital FPV system is an add-on for existing drones. The DJI Avata, meanwhile, sounds like it’ll be an all-in-one, cinewhoop-style drone, with a compact design and prop guards to make it safer for indoor flying.

Crucially, it’s also rumored to be bringing a camera that’s similar to the one we saw recently on the DJI Mini 3 Pro. One of the big challenges of indoor shooting is the comparative lack of light, which is why FPV drone fliers often use GoPro cameras (or stripped-down versions of them) to capture footage.

GoPro actually made a dedicated FPV version of its Hero 10 Black action camera for this purpose, as you can see in our hands-on GoPro Bones review. So it seems that GoPro and DJI could once again be going head-to-head in the drone space.

The difference between GoPro Bones and the DJI Avata appears to be the audience they’re aiming at. GoPro’s camera is very much designed for the DIY tinkerers of the FPV drone community, who like to fly their drones manually.

But if the DJI Avata really does lack a manual mode, as the rumors suggest, then it could be aimed more at beginners and amateurs who want to shoot events like weddings without needing the impressive piloting skills required for traditional FPV drones.