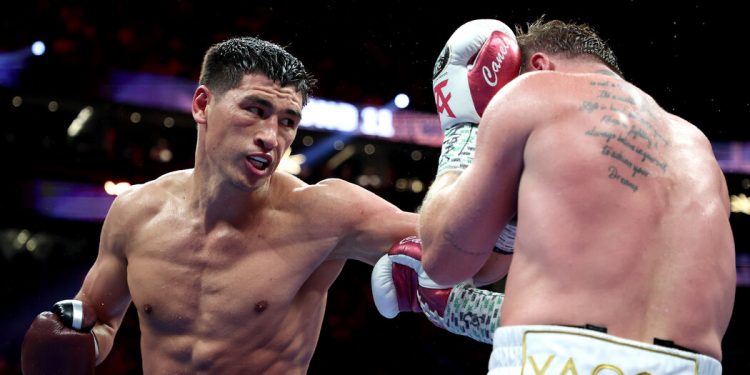 “He’s a great champion,” said Álvarez, a native of Guadalajara, Mexico. “That’s how boxing is. I have to accept it.”

The relatively small guarantee for Álvarez also signaled that DAZN, the streaming service broadcasting the bout, and Matchroom, the promotional outfit that organized the event, expected robust pay-per-view sales, which would in turn, bolster Álvarez’s payday.

Consumer interest in the event was difficult to gauge beforehand.

Images of Álvarez and Bivol plastered the Las Vegas Strip in the days preceding the bout, the sidewalks dotted with vendors hawking fight merchandise — T-shirts, Álvarez headbands, miniature boxing gloves in the colors of the Mexican flag. For Friday afternoon’s weigh-ins, a crowd of boxing fans, most of them Álvarez partisans, packed the plaza outside T-Mobile Arena.

But the crowd inside the building Saturday night did not threaten the venue’s attendance record — 20,062 for an Ultimate Fighting Championship fight between Conor McGregor and Dustin Poirier in July 2021. The audience yawned through much of the undercard, whistling in derision as Montana Love won a decision over Gabriel Gollaz in the co-main event. At times they were so quiet, helicopters could be heard flying over the arena’s roof.

The loudest ovation on the undercard came when Álvarez arrived at the arena, sporting a bright pink tracksuit with a silver zipper and drawstrings, with Álvarez’s initials stenciled onto one side, and a Dolce & Gabbana logo on the other.

By 8:30 p.m., when the first of Bivol’s cornermen entered the ring to wait for their fighter, two sections in the arena’s lower bowl sported patches of vacant seats, which filled in within minutes. When the ring announcer, David Diamante, took the microphone and strode to the ring, the upper deck was still only half full.

They got something unusual on Saturday night: a spectacle of Álvarez being truly challenged rather than the sport’s biggest star putting on his usual dominant show. And Bivol, with his victory, became the first man in a long time to make Álvarez rethink his methodical plans.