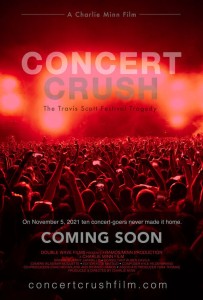 
“If the lawyers from Live Nation are nervous, well then that’s on them… My films speak the truth, and whatever comes from that truth so be it”

HOUSTON, Texas – A new documentary “Concert Crush” about the November 5 2021 Astroworld Festival tragedy is getting opposition from Live Nation lawyers.

Live Nation, the entertainment company that organized the festival, raised concerns about the documentary saying in a letter it could taint the jury pool if released in theaters.

Charlie Minn, the director of Concert Crush, says his documentary focuses on the victims and the truth and isn’t worried about Live Nation’s view.

“My goal and my aim are just to make the most truthful, victim-driven film possible and let the truth set you free and if the lawyers from Live Nation are nervous, well then that’s on them.
If they did nothing wrong, then they should have nothing to worry about. My films speak the truth, and whatever comes from that truth so be it,” says Minn.

“I don’t know all the laws out there but that’d be taking away a lot of rights. I don’t think there’s anything they can do in terms of that,” says Minn

Minn also speaks about his process of creating these types of documentaries.

“In terms of the process, I go about making it the same way as other films. Maybe I make a wish list of maybe 10-15 people for the documentary. The major difference between this one and the other films is most of the others are mass shootings. this was not a mass shooting. Certainly, it was a mass casualty and this was definitely preventable and avoidable,” says Minn

The next screening of “Concert Crush” is Wednesday, April 20 in Portland near Corpus Christi. It’s one night only.